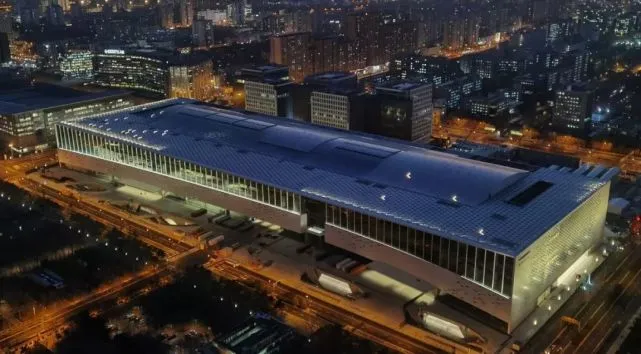 The Chinese solar thermal industry has ended its downslide. With 18.9 GWth in 2021, the manufacturers produced the same amount of solar thermal capacity as in the previous year. The Chinese Solar Thermal Industry Status Report 2021 assessed the “zero growth” as a great business year after eight years of continuous decline. The driving factors were again central hot water and space heating projects for the housing industry. In 2021 the residential water heating market also stabilised because householders took up the offer from solar water heater providers to trade-in their old equipment. The photo shows the new National Convention Center which was part of the Winter Olympics area and which covers its hot water demand using a 600 m2 collector field on its roof. You can view the articles about the previous two Chinese industry reports by clicking here: 2020 and 2019.
Photo: Chinese Status Report

2021 was a year with sunlight and shadows for the solar thermal industry. First of all, it was a year of economic recovery after the lockdown period of 2020. The housing industry was running at full speed and the beginning of the year was even marked by electricity blackouts because of economic growth.

But 2021 was also a year of sharp rises in raw material prices, which hit all manufacturing businesses around the world. In an industry survey the manufacturers stated that project profits fell sharply. Many larger system suppliers were faced with the dilemma of accepting losses in tendering business. They were unable to increase prices in the offers they had already submitted in bids to the housing industry. Consequently, some even hesitated to bid because of impending losses.

The industry is, however, looking optimistically into the future. The authors of the report name two policies that promise further increases in demand. First, the “Double Carbon” strategy, which the government announced in September 2020. It says that C02 emissions will peak before 2030 and carbon neutrality will be achieved by 2060 and predicts a “great opportunity for the solar thermal sector”.

The authors also praise the new building code issued by the Ministry of Housing and Urban-Rural Development in October 2021. It will come into force on 1 April 2022. Among other technologies, the code states clearly that new buildings should include solar energy systems and their service life should be more than 15 years. “This is a binding, nationwide regulation, which will have an enormous driving force on sales if fully implemented, especially for solar balcony systems on high-rise buildings,” explained Hongzhi Cheng, Managing Director of Sun’s Vision, who is one of the authors of the annual industry report.

The report names another two positive factors that will stabilise the solar thermal turnover in China in the long term. “The quality of most brands of domestic solar water heating system has improved significantly since 2000”. Their lifetime has gradually been extended, especially since 2010. It is now considered as 15 years on average, up from 10 years in earlier statistics. 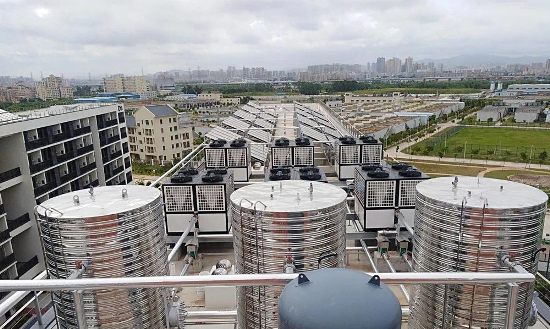 Solar collectors, heat pumps and water tanks on the roof of the new dormitories of the company Vivo Mobile Communications Co. Photo: Fivestar

Another interesting indicator of Chinese solar thermal market development is the share of the engineering segment among new additions. For the first time in several years the engineering project contributions declined from 74 % in 2020 to 72 % in 2021. Cheng sees the growing material prices, which have delayed some large-scale projects, as one of the reasons for this difference in performance.

The report also states that 2021 saw new vitality in the residential solar water heater sales. First of all, solar resellers were still active in the rural areas in Yunnan, the most southwestern province of China. Second, solar water heater manufacturers in the leading solar provinces like Shandong and Jiangsu used trade-in offers to stimulate demand from households. The families were able to return their old equipment and receive a price reduction for a new system. This promotion was combined with renovating existing buildings in these provinces.

Flat-plate collector sales went up again slightly in 2021 to 498 MW or 7.11 million m2. This technology has doubled its share of the total annual sales from 13 % in 2015 (387 MW) to 26 % in 2021. According to Cheng, no new flat-plate collector manufacturers started business in 2021. The large manufacturers provided the additional volumes by improving the utilisation rates of their existing production capacities.

Flat-plate collector production is dominated by black paint / lacquer as the coating material of the absorbers with 81.5 % of total sales. Selective blue coatings account for 7 %. Anodized black coatings are used on 6.6 % of flat-plate collectors sold. The remaining 4.8% of collectors have other coatings. 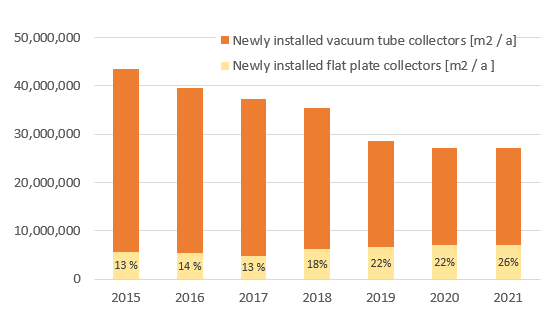 Market development in China between 2015 and 2021. The figures also include a portion of unspecified collector exports. Source: Chinese Status Report 2021

This news article was written in cooperation with solar thermal professional and solrico partner Yaping Zhang.