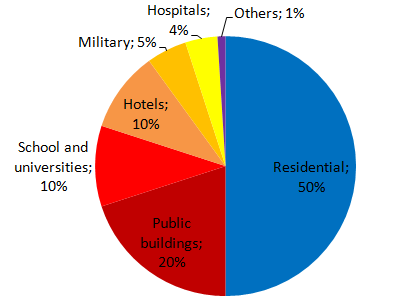 The make-up of China’s solar thermal market is changing: The segment that used to guarantee the industry’s profits, the retail business of small thermosiphon systems for private households, has been declining in recent years. Other solar thermal segments, however, have been taking off in the meantime – for example, the market for more sophisticated solar thermal installations that are integrated into blocks of flats, hospitals, schools or universities. There is also growing interest in medium- and high-temperature solar thermal systems for industrial process heat. According to the annual surveys and market reports by Sun’s Vision, a consultancy located in Shandong province, the so-called solar thermal engineering market, which includes building integration and industrial process heat systems, increased by 50% in 2012 and 2013, after having grown by 35 % in 2011. The pie chart shows the individual categories of the building integration segment in 2013, which was the main driver of the national market.
Source: Sun´s Vision
The latest market report, “China's Solar Thermal Development Market Book (2013-2014 中国太阳能光热市场)” by Sun’s Vision, states that building integration systems accounted for 30 % of the total market volume of 66 million m2 last year. The chart above depicts the distribution of these projects: Mostly, the market is growing due to new residential buildings and governmental projects for low-income households or government staff. But the share of projects providing hot water in schools, universities and hotels is still a notable one as well.
Split solar water heaters on balcony walls
Although the building integration segment mainly owes its recent growth to a number of solar thermal obligations at provincial and municipality level, it has also been leading to the development of new technologies. Many of the big Chinese solar water heating manufacturers, such as Linuo Paradigma, Sangle, Himin and Sunrain, have begun to produce solar thermal systems with forced circulation in order to fulfil the requirements for building integration systems. Split solar water heaters mounted onto walls or the railing have been very successful in residential high-rise buildings. In contrast, the system of choice for schools, universities, hotels and hospitals is a centralised one with a single large hot water tank and an array of solar water heaters on the top of the building.
Certain provinces grapple with market saturation
According to the market report by Sun’s Vision, 70 % of the companies specialised in the retail segment showed little business activity and are no longer involved in large-scale marketing campaigns. But several big players, such as Linuo Paradigma, Sangle, Sunrain, and Jingpu Solar, are on their way to increased retail shares through aggressive marketing efforts. The two main reasons why the retail part of the business is slowing down are the slightly saturated markets in the provinces of Shandong, Jiangsu, Henan, Hebei and Anhui, as well as the shift to the engineering segment. According to Sun’s Vision, retail market volume dropped by 22 % in 2013 while profits decreased by 15 %. Sun Vision´s market report 2013-2014 is available as a print version in Chinese.
The text was written by Simon Goess, a German researcher from TU Delft, who interviewed several solar thermal stakeholders from the industry, associations and the administration, mainly across the Shandong province.
More information:
Sun’s Vision：http://readsolar.com/
Linuo Paradigma: http://www.linuo-paradigma.com/
Sangle: http://www.sangle.com/cn/main.asp
Himin: http://www.himin.com/
Jingpu Solar: http://www.jptyn.com/
Sunrain: http://en.sunrain.com/