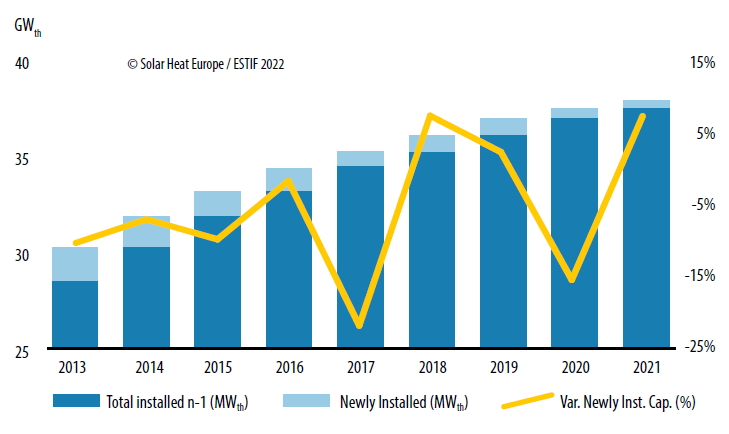 Solar heat is on a growth path in Europe. The newly installed capacity grew by 8 % in 2021 to 1.45 GW in the EU27 plus Switzerland and Great Britain – a historically high percent growth. The countries with double-digit growth according to market statistics from Solar Heat Europe (SHE) were France (+ 130 %), Malta (+ 93 %), Italy (+ 84 %), Greece (+ 18 %), Great Britain (+ 18 %) and Portugal (+ 11 %). Pedro Dias, Secretary General of SHE, expects further growth for 2022 driven by high gas and electricity prices, additional policy support in some countries and increasing demand for utility-scale solar collector fields for heat networks or industrial clients. The chart shows the cumulated “net” solar heat capacity in operation in Europe (blue columns) and the annual growth rates of the newly installed gross capacity (yellow line). “Net” means that capacity which was 20 years in operation is deleted.
Source: Solar Heat Europe

“The current energy crisis is a heat crisis”, stated Dias when starting his presentation at the beginning of December 2022 during the webinar Solarising heat in Europe: 2021 market statistics and long-term trends. Solar heat represents energy independence. Dias stressed that “90 % of the solar thermal systems sold in Europe are also manufactured in Europe. And on top of that, our industry is a net exporter. European collector manufacturers export systems to the Middle East, Northern Africa and also Latin America”. The recording of the webinar is available here.

As in previous years, SHE has put together the key market data related to the previous year 2021 in a 6-pager that is available for download here. Below are some of the key figures and information from this report: 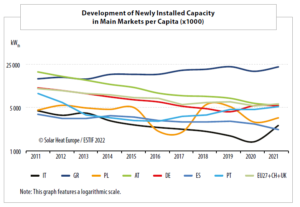 Dias concluded his presentation by making clear that “we have an important moment in terms of policy framework in Brussels”. The dialogues between the Commission, the member states and the EU Parliament regarding the Renewable Energy Directive (RED) and the Energy Performance Building Directive (EPBD) are both in a final phase and voting is expected in 2023. The current proposal for RED from the commission includes binding growth targets for renewable heat, a minimum level of renewables in buildings and in district heating as well as a growth target for renewables in industry.

The Solar Rooftop Initiative as one of the key elements of the EPBD has been heavily discussed and it is still unclear what the final text will be, according to Dias. He made clear that this is an initiative for both PV and solar thermal, although it is sometimes referred to as a solar PV initiative. SHE lobbies for a fair approach for all solar energy technologies on roofs, be they PV, solar thermal collectors or PVT – a combination of PV and solar thermal in one element.

Dias summarised that Europe’s administration offers “conditions on the political level that can boost the deployment of solar thermal if the measures are transposed in a proper way at the national level”. SHE leaves no doubt that the solar thermal industry can deliver. “Our industry has idle manufacturing capacity that can be activated to increase the production capacity by a factor of three in the next six months”, as stated in the market report. “Furthermore, new production lines can be set up in relatively short time frames, from 3 to 18 months depending on the solar collector type and pre-existing conditions.”

This is particularly important when looking at the challenging targets that, for example, the IEA Net Zero by 2050 roadmap sets for solar technologies in the building sector (see chart below). Solar thermal will go from 250 million households with solar water heating systems to 1.2 billion households in 2050 (factor 5), while households that use PV will grow from 25 million to 400 million (factor 16).