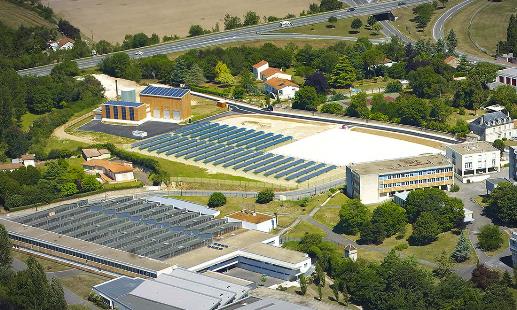 Two weeks before the start of Russia’s war against Ukraine, France’s President Emmanuel Macron gave a speech in which he detailed his strategy for developing the nation’s energy sector. He left no doubt that nuclear energy would continue to play a central role, but at the same time attributed growing importance to renewable energy sources for the national energy mix. He announced financial support of around EUR 400 million for the industrial use of renewable energy sources. Now the war against Ukraine has further exacerbated the previously identified need to reduce dependence on imports of Russian gas. This also improves the prospects for the use of solar heat both for private households and for utility-scale applications. The photo shows a 1.3 MW plant feeding solar energy into the district heating grid of the town of Pons in Western France.
Photo: Newheat

France’s solar heat market has had a tough time over the last decade. In 2012, almost 300,000 m² of collectors (210 MW) were installed in metropolitan France and its five overseas territories but by 2020 this annual figure had fallen to 138,000 m² according to the National Institute of Statistics and Economic Studies (Insee). If the data published by EurObserv’ER is correct, the newly installed collector area was only 120,000 m² in 2020. The decline affected both individual and collective solar installations.

It is noteworthy that far more collector area has been installed in the French overseas territories than in the mother country. According to Insee, in metropolitan France newly installed solar thermal collector area in 2020 was 47,000 m² but in the overseas departments it amounted to 91,000 m².

2021 seems to mark a trend change, at least in metropolitan France. According to data from the Union of Solar Energy Professionals (Enerplan) the newly added capacity in 2021 increased by 70 % to 78,820 m² (see table 1). The highest growth was recorded in the field of large-scale installations. While no such systems were installed in 2020, last year systems with a collector area of 24,680 m² started operation.

Which factors triggered demand in 2021? On the one hand, the price increase for fossil fuels has certainly contributed to the fact that homeowners and industrial heat consumers have been looking for alternative energy sources and have discovered solar thermal as an environmentally friendly and inexpensive option for heating and cooling. However, the availability of financing support has certainly also contributed to the market growth.

For example, private homeowners benefited from last year’s expanded grant programme MaPrimeRénov. If they wanted to invest in a solar water heater they could get up to EUR 4,000. For investment in a combined solar system for hot water and space heating MaPrimeRénov provided up to EUR 8,000. MaPrimeRénov runs under the slogan Mieux chez moi, mieux pour ma planèt (better at home, better for my planet). It supports all retrofit measures around the house either for heating, insulation, or ventilation. The annual total budget of EUR 2 billion for the start year 2021 has again been allocated for this year. The scheme has simplified the grant process, as home owners can submit their applications online.

In addition, the state French energy agency (ADEME) should be mentioned, with its large solar thermal project support scheme, which has been in place since 2015. The annual calls resulted in a number of large plants being commissioned in 2021 (see table 2).

Table 2: Large solar heat plants that went into operation in 2021. Read more about the plant in Issoudun Source: Enerplan

Strategies to further increase the awareness that solar thermal energy is an environmentally friendly and cost-effective alternative to fossil fuels will be discussed during the annual conference Etats Généraux de la Chaleur Solaire (status quo of solar heat). Enerplan has organised this one-day event on an annual basis for eight years. The conference will take place this year in Montpellier on 16 June.

Sources mentioned in this news article: