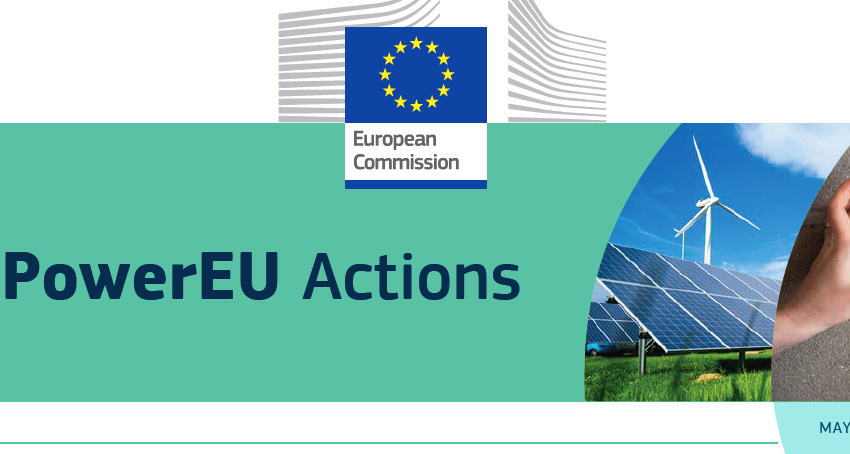 The Russian invasion of Ukraine triggered the publication of the REPowerEU plan, which the European Commission introduced on 18 May. Accelerated deployment of renewable energies and energy efficiency measures should rapidly reduce dependency on Russian fossil fuels and speed up the green transition. The climate goals were tightened again and the first figures from the EU Solar Energy Strategy announced. This was actually only expected in June. According to this strategy, the contribution of solar thermal together with geothermal will need to at least triple by 2030.

Probably the most stunning announcement was the increase of the renewable energy target from 40 to 45 % by 2030. This increase alone will require around 169 GW of extra renewable energy capacity in addition to the 1,067 GW expansion already needed. In total some 1,236 GW of renewables need to be installed in just eight years or 154 GW per year. For comparison, 37.2 GW of PV, wind and solar thermal were added across Europe in 2020, according to the Renewable 2021 Global Status Report. 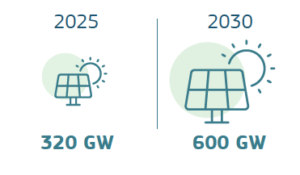 The package comes with a new Solar Energy Strategy with some technology-specific targets. These include a target of 320 GWp of newly installed PV by 2025 and 600 GWp by 2030.

No specific target for solar heat

A solar heat target is not quoted directly, although some mentions are made such as: “Solar energy systems have long been a low-cost and reliable solution for heating in many European countries. However, solar heat accounts for just over 1.5 % of heating needs. To reach the EU targets, energy demand covered by solar thermal and geothermal should at least triple by 2030”.

The Solar Energy Strategy states that “solar energy can also provide industrial heat, which accounts for 70 % of the industrial energy demand. Based on solar collectors or concentrators, solar can deliver heat for industrial processes from 100 to 500 °C. The potential for solar heat for industrial processes is, however, largely untapped”.
By the end of 2020, 37.5 GWth of solar heat capacity was in operation in Europe. Solar Heat Europe appreciated the target of 110 GWth solar heat capacity by 2030 and emphasised the fact that “we have the manufacturing capacity in Europe to multiply the current production of solar thermal”.

In the residential sector the European Commission expects that through energy efficiency and heat pumps a total of 37 billion m3 gas equivalent will be saved. The Energy Efficiency Directive will also increase its target reduction due to increased efficiency from 9 to 13 %. At the same time, it indicates that 2029 will be the end date for stand-alone fossil fuel boilers.

Finally, regarding district heating the document indicates that “member states can accelerate the cost-effective deployment and integration of large-scale heat pumps, geothermal and solar thermal energy by developing and modernising district heating systems, which can replace fossil fuels in individual heating and provide clean communal heating, especially in densely populated areas and cities as well as exploiting industrial waste heat whenever available”.

The REPowerEU plan expects a “doubling of the rate of deployment of heat pumps and measures to integrate geothermal and solar thermal energy in modernised district and communal heating systems.” This doubling is expected to result in a cumulative 10 million units over the next five years.

According to the EU’s press release from 18 May, an additional investment of EUR 210 billion is needed between now and 2027 in order to achieve the targets of the REPowerEU programme. Most of these funds will come from additional EU cohesion funds in the form of voluntary transfers to the existing Recovery and Resilience Facility (RRF). In addition, the Commission proposes to use EUR 20 billion in grants from the sales of the EU Emission Trading System.