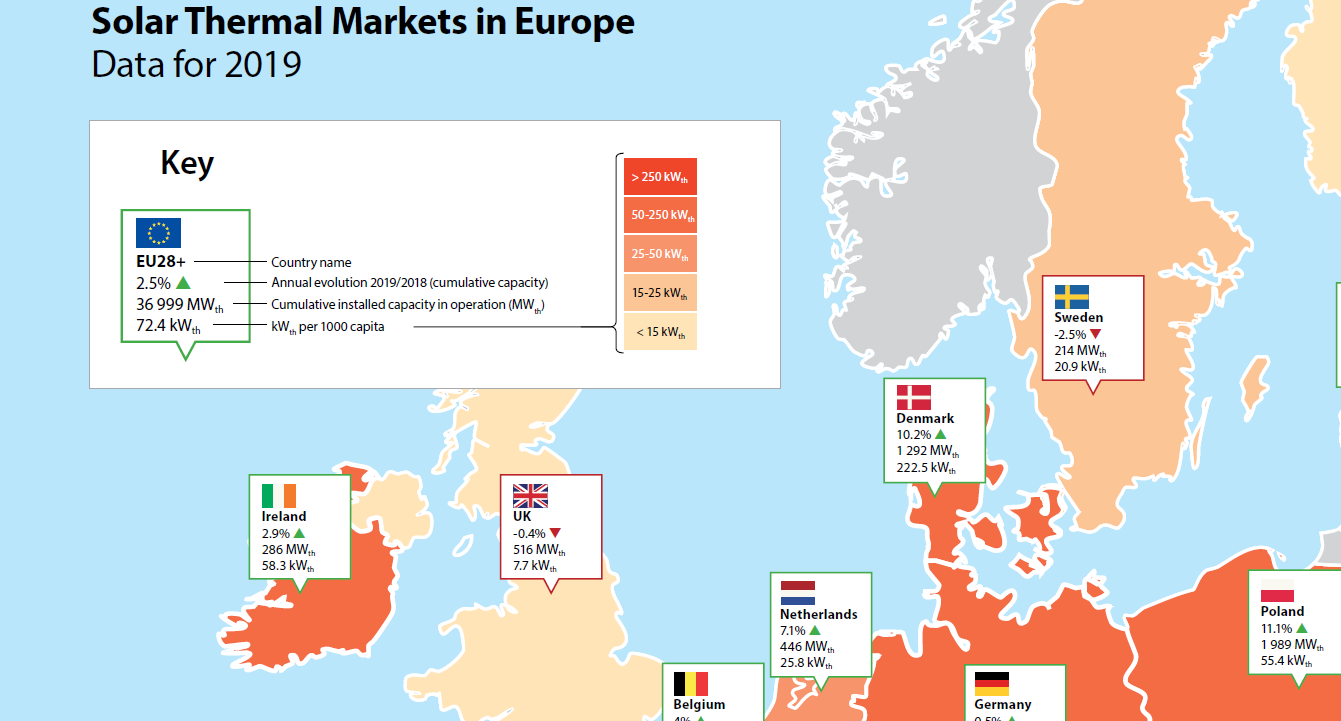 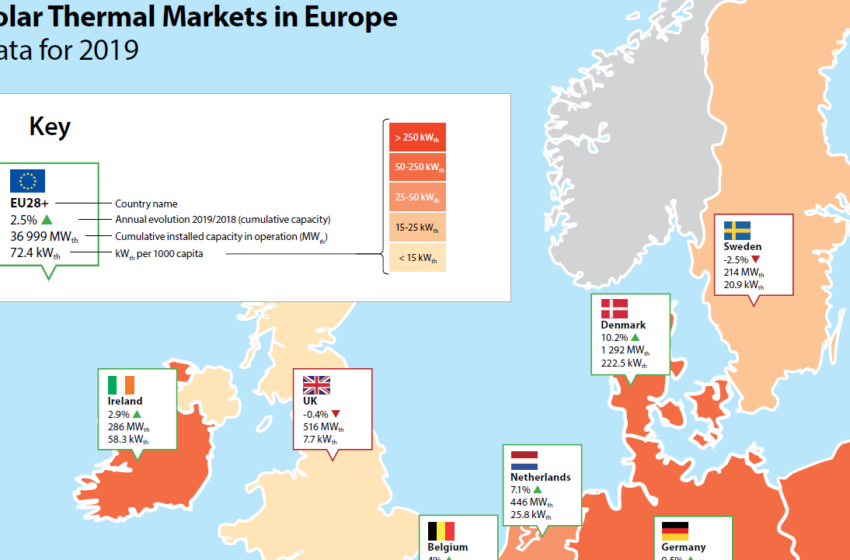 Europe’s solar heating and cooling markets keep growing, Brussels-based Solar Heat Europe said in a 21 December press release. At the end of 2019, about 10.4 million solar thermal systems totalling 37 GWth of capacity were in operation across the European Union and Switzerland, 3 % more than a year earlier. The industry also generated a combined turnover of EUR 1.96 billion and employed about 20,000 people full time. A detailed analysis of how Europe’s markets fared in 2019 is part of a six-page Solar Heat Europe brochure, available for download at http://solarheateurope.eu/publications/market-statistics/solar-heat-markets-in-europe/
Annual capacity additions in the EU’s two countries leading in solar thermal installations – Germany (358 MWth) and Greece (253 MWth) – converged in 2019 because of opposing national trends. The German market continued its decade-long decline and was down 11 %, whereas additions in Greece grew by 10 % for the fifth consecutive year thanks to cost-competitive products, a minimum 60 % solar hot water requirement for new buildings, and the Household Energy Savings programme. However, in a surprise reversal, preliminary data indicates that Germany made substantial gains in 2020.
The top spots in 2019 were taken by Denmark, where capacity jumped by 174 %, the Netherlands, where the market grew by 72 %, and Cyprus, where growth came to 24 % overall.
Denmark again benefited from a large number of new solar district heating systems. In all, it saw 10 fields built and 5 expanded, bringing the total to 134 MWth installed in 2019. The strong showing was partly the result of a good business environment, including high taxes on fossil fuels, enough land for cost-effective, ground-mounted solar fields, and cheap finance options for the non-profit, user-owned utilities running the country’s district heating networks.
Capacity additions in the Netherlands grew from 29 MWth in 2018 to 49 MWth in 2019, stimulated by a broad public discussion about phasing out natural gas. Both sales for small-scale and roof-mounted solar thermal systems have risen since 2016 thanks to the national government’s Sustainable Energy Investment Subsidy (ISDE) programme. And the SDE+ scheme aimed at multi-megawatt installations led to the commissioning of yet another 13 large solar thermal systems totalling 23 MWth, a 38 % increase compared to the previous year.
Cyprus also had double-digit growth rates in 2019. Collector area additions on the island increased by 24 % in 2019 after growing by 5 % in 2018. The increase in capacity came as a result of an overall good economy and the grants offered by the government for residential solar thermal systems.

In Latvia, a flagship project among large installations – a 15 MWth SDH field in Salaspils – reportedly came online in September 2019.
These positive developments helped offset declines in some other major markets, such as France (-14 %), Italy (-16 %) and Switzerland (-31 %). The downward trend in sales was said to be caused by low numbers of heating system retrofits, installers’ low interest in solar thermal, and still relatively high prices for residential systems in certain countries in Europe.
More information:
http://solarheateurope.eu/publications/market-statistics/solar-heat-markets-in-europe/