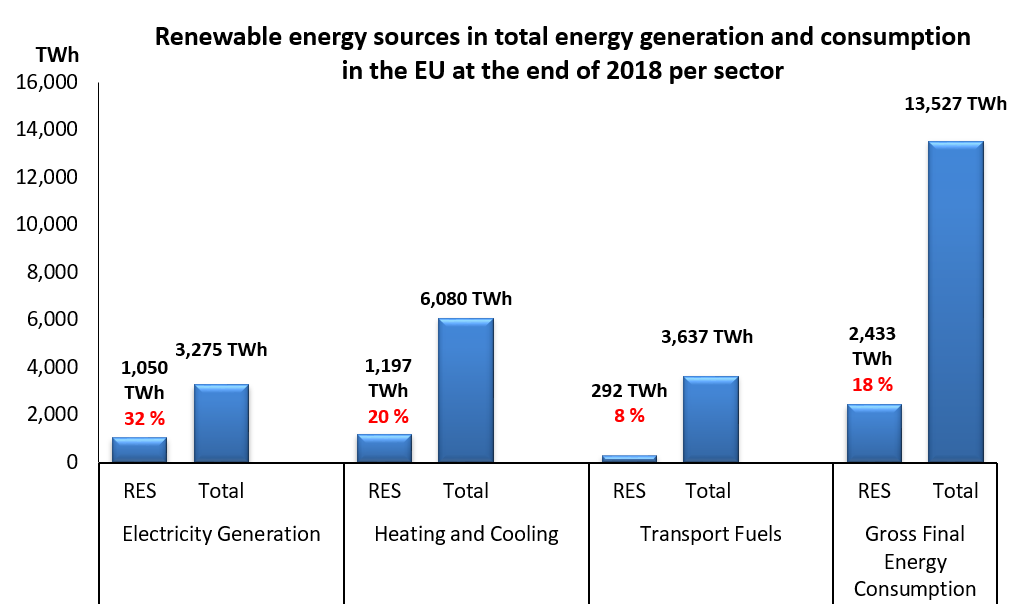 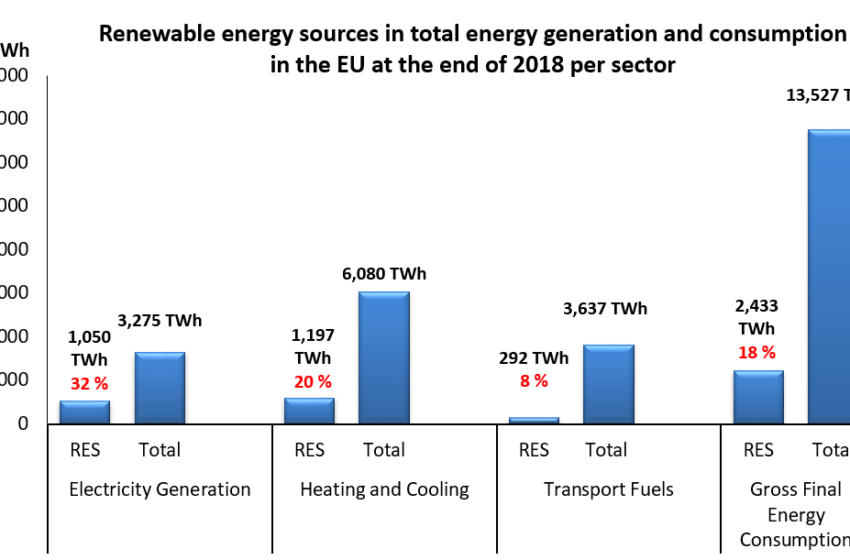 According to a Eurostat press release published on 23 January, renewable energy sources made up 18 % of total energy generation throughout the European Union at the end of 2018, which means the EU’s target of 20 % by the end of 2020 seems well within reach. And yet, the above chart shows very different contributions by the three end-user markets to this overall target. Whereas renewable energy systems (RES) met 32 % of electricity demand in the then 28 member states, clean fuels provided only 8 % of the energy in the transport sector. In order to find out how much progress has been made regarding heating and cooling capacity additions, Brussels-based association Solar Heat Europe has taken a closer look at the data supplied by Eurostat.
Source: Solar Heat Europe
“If you look at how much renewable energy was produced in Europe year after year, you will quickly see some differences between the market sectors,” said Pedro Dias, Secretary General of Solar Heat Europe. Whereas the amount of electricity generated from renewables (excluding hydropower) more than doubled from 2004 (465 TWh) to 2018 (1,050 TWh), the amount of clean heat increased only steeply until 2010 before it almost came to a halt (see figure 1), growing by only 2 % per year from 2010 to 2018. By contrast, renewable electric generation capacity increased by 7 % a year during the same period. “At the current rate, we will not be able to meet more ambitious targets, such as lowering GHG emissions from heating by at least 55 % by 2030,“ noted Dias.

Figure 1: Yearly clean energy output throughout the EU, according to Eurostat data. In this chart, renewable energy production means the amount generated by systems that run on biomass or solar thermal or are powered by heat pumps.
Chart: Solar Heat Europe
Solar Heat Europe supports the Coalition for Higher Ambition, a network of businesses, trade unions, government agencies and other groups that are calling for more climate action. On 9 December 2019, this coalition published an open letter to the new European Commissioners, urging them to come up with a proposal to increase the EU´s NDC (stands for Nationally Determined Contributions) “to at least 55 % of GHG emissions reductions by 2030 compared to 1990 levels within the first 100 days of your mandate.” The coalition claims that urgent measures are needed and wants the European Union to become a role model for the rest of the world. Postponing the planned increase in emissions reduction (set to rise to 55 % across the EU) to 2021 would mean missing the UNFCCC’s deadline and undermining the leading role of the EU in international climate negotiations (see the attached PDF for the full text of the letter).
Solar heat far off NREAP targets
The most disappointing piece of news has been that there is a large gap between solar heat targets set out in member states’ National Renewable Energy Action Plans (NREAPs) and the actual amounts of heat generated by solar thermal collectors in the EU. “By the end of 2018, heat produced by solar thermal systems across all member states had just reached a third of the 2020 targets,” Dias explained. Every year, Solar Heat Europe updates what it calls the NREAP Barometer. It currently shows a large gap between previous expectations for solar heat capacity and the sobering reality (see figure 2).

Figure 2: The NREAP barometer illustrates the gap between the targets set for solar heat production in Europe by the end of 2020 (column) and the actual amount of thermal energy generated by solar heat systems in Europe in selected years (yellow arrows).
Chart: Solar Heat Europe
The Barometer consists of a multi-colour column depicting the collector area that the eleven most ambitious countries had planned to have installed by 2020. All NREAP targets together come to 79 GWh (assuming an average yield of 500 kWh/m2). However, the collector area in operation across Europe at the end of 2018 amounted to 51.5 million m2 (36 GWth), and the systems produced 25.6 TWh of heat that year, which was well below target.
Towards a greener and more competitive energy system
“All of us in the industry need to come together to communicate to policymakers and other stakeholders more clearly what role solar thermal can play in the EU’s future energy system. By providing free energy and impressive energy storage capacity, solar thermal systems can contribute a great deal to a greener, more responsive and resilient energy system and can reduce our dependence on fossil fuel imports,” Dias said, adding: “We also have to remind them we are a European industry supplying European consumers with products made in Europe and we help create jobs all over the continent. Furthermore, solar heat is one of the main RES in terms of net exports. If we want a cleaner, more competitive Europe, solar thermal energy must be part of the equation.”
Solar Heat Europe has been supporting the growth of the solar heat market in Europe, for example, by advocating more appropriate regulations or encouraging EU policymakers to create an environment that will give solar heating and cooling companies a fair chance to compete in the energy market. The organisation has about 40 members based in Europe, which means it represents, directly or indirectly, over 90 % of the industry along the value chain.
More information:
http://www.solarheateurope.eu/
https://solarthermalworld.org/wp-content/uploads/2020/03/open_letter_about_ambitions_2030.pdf