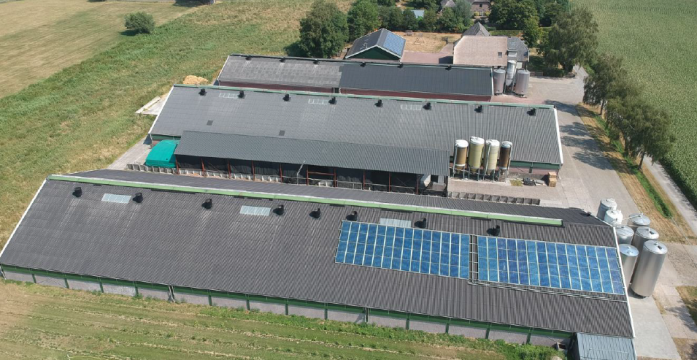 The global solar industrial heat market saw encouraging trends in 2021. The first large systems with heat purchase agreements started operation in France and Mexico. Spanish PVT collector manufacturers gained industrial heat and power customers for the first time. Multinational corporations turned increasingly to a zero-carbon heat supply from the sun. And last but not least, technology suppliers from the Netherlands and Austria realised a growing number of agricultural heat projects, resulting in the number of new SHIP systems in 2021 outside China growing despite the influence of the pandemic. These are the key results of a survey carried out among 70 technology suppliers listed on the SHIP Supplier World Map. The survey was supported by the German research project Modulus. The photo shows a 190m2 collector field for a calf-breeding farm in the Netherlands where the hot water is used to prepare food for the calves. Read as well the news about structural changes in the SHIP supply industry.
Photo: G2Energy

Altogether 71 SHIP systems totalling 36 MW started operation around the world. At first glance this is a reduction compared to 2020 when 85 systems with 93 MW were newly installed (table 1). It is interesting, however, to look at the influence of China here. China, which led the SHIP world market in 2020 with 30 new plants, reported only 7 new systems. As a result, the number of new SHIP projects outside of China increased from 55 with 22 MW to 64 with 27 MW in 2021.

The fluctuations in China had to do with the tough lockdowns in the first quarter of 2022. During this time, the employees were not able to go into the offices to compile the data. The Chinese SHIP market is generally larger than represented in the annual surveys as the major Chinese collector manufacturers often only supply material to construction sites, where local companies take care of the installations, and the material suppliers do not necessarily know how the solar heat is used by the customers.

Table 1: Global SHIP deployment from 2018 to 2021. Figures from 2020 have been updated with newly reported systems. The totals include all SHIP systems with a collector area of at least 50 m2 irrespective of the type of collector (e.g., flat plate, vacuum tube, air or concentrating and PVT) used for a given project. Capacity was calculated using the factor 0.7 kW/m2 for all collector types.
Source: Yearly surveys among the companies listed on the SHIP Supplier World Map

The ranking of the countries with the highest number of completed SHIP installations changed significantly from 2020 to 2021 (see table 2). Due to a high number of subsidised agricultural systems in the Netherlands and Austria, these two countries overtook China and Germany, which were among the largest SHIP markets in 2020. Another industrial solar heat system was installed in each of Turkey, Italy, Saudi Arabia, Greece, Brazil and Thailand. In terms of capacity additions, France (10.1 MWth) overtook China (8.2 MWth), followed by Spain (3.9 MWth) and Turkey (3.2 MWth).

Table 2: Countries ranked by the number of SHIP installations completed in 2021. The average size of these systems varies significantly from country to country. Source: SHIP supplier surveys 2020 and 2021

Two SHIP technology suppliers successfully commissioned their first solar heat delivery projects in 2021:
The third-party investor Kyotherm together with the solar heat specialists from Newheat – both from France – commissioned a 10 MW flat-plate collector field to offer the malting giant Boortmalt a solar heat price below what the client paid previously for gas-produced heat. Inventive Power in Mexico commissioned its first ESCO project, a parabolic trough collector facility with 332 kWth of capacity for a food processor. During 2021, the Belgian company Azteq began constructing its fourth ESCO project, a 3.8 MWth parabolic trough collector field that will supply steam to a chemical producer in Belgium. The ESCO model reduces the industrial heat user’s risk and speeds up business decision making because the engagement is free of capital expenditure and does not burden the equity of the client.

Rollout in cooperation with multinationals

Multinational corporations are a promising customer group for solar heat. Many large corporations have set themselves far-reaching emissions reduction targets and need zero-carbon solutions, especially in the area of heat, which accounts for 75 % of global industrial energy requirements. On the other hand, they require very short payback times, often less than 3 years, which at most locations can only be achieved with solar heat with an investment cost subsidy. Some SHIP technology suppliers managed to install the first solar process heat systems at large corporations in 2021. It is to be expected that once the first solar heat demonstration systems are successfully operating, a rollout can take place at production sites globally. The following projects are worth mentioning here: