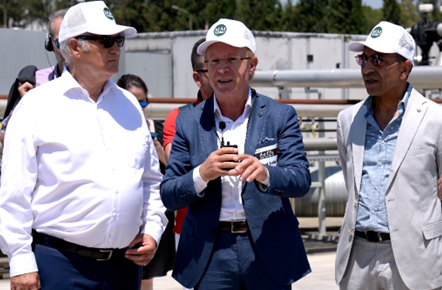 After almost a year of operation the parabolic trough collector field at Mayr-Melnhof Graphia Izmir, Turkey, was inaugurated on 22 June 2022. The German project developer Soliterm installed the 3 MW collector field on the roof of a new production building in 2021. It allows temperature and humidity control in the production halls all year round. Mayr-Melnhof Group is a multinational corporation headquartered in Austria and specialised in the manufacture and folding of carbon board, fine and kraft paper for the cigarette industry. The photo shows Detlev Wolter, the General Consul for Germany, Dr Ahmet Lokurlu, CEO of Soliterm and Fuat Polat, Managing Director of MM Graphia Izmir.
Photo: Soliterm

Within the group, the team from MM Graphia Izmir has pioneered the use of solar energy for space heating and cooling of their factory. Solar energy saves gas in winter and electricity for the electric chillers in summer, and helps the subsidiary on its path towards net zero emissions.

“We wanted to realise a best-practice example for using solar energy for a sustainable energy supply at our sunny site in Izmir and we successfully convinced our headquarters in Austria in support the investment”, explained Serdar Senyuz, Head of Finance of MM Graphia Izmir. The solar field has run reliably in the first few months since being commissioned in October 2021, confirmed Senyuz. The payback period for the solar field costs is slightly longer than the typical years that the MM Group aims at for investments.

The opportunity was favourable when increasing the production capacity. MM Graphia Izmir still had 50,000 m2 of open space and planned to construct a new packaging factory. The 15,000 m2 roof of this new building was then used for the installation of the parabolic trough field. In total, MM group has 52 production sites in 22 countries.

“We started the search for a solar steam technology supplier in 2018 and held the first talks with Soliterm in November that year”, said Senyuz. The planning period was relatively short as the clients knew exactly what they wanted, confirmed Deniz Lokurlu, Global Sales Director of Soliterm. The production of high-quality paper products requires very stable air conditioning in the production halls throughout the year and has cost the company a lot of money for gas and electricity. The solar steam plant is therefore operated in two modes. In the winter months the solar steam is used to provide heat for the air heating unit of the production halls backed up by gas boilers. In summer mode the solar steam runs new double-stage absorption chillers from the Indian company Thermax backed up by electrically-driven compression chillers.

MM Graphia is not only a pioneer in using solar energy within their group, but also a trendsetter in using the support from the Turkish Energy Ministry for such emission-saving measures. “We have worked closely with the Turkish Energy and Finance Ministry to receive a tax reduction for 50 % of the solar investment,” explained Senyuz. “Our project was fairly unique and it took the ministry quite some time to understand and accept the investment.” The Ministry of Energy is now planning an on-site inspection of the system and then the approval process could be completed.

Parabolic trough collector field on the roof of the new production hall of MM Graphia in Izmir Photo: Soliterm

Soliterm now offers its fifth generation of parabolic trough collectors. The model PTC 1800 consists of an aluminium mirror with an aperture area of 9 m2 for roof installations, which focuses the irradiation on a receiver tube. So far, the collectors have been produced in a factory in Ankara, Turkey. To cover the increasing demand for concentrating solar heat solutions in Europe Soliterm plans to open an automated production factory near Aachen, the headquarters of the company in Western Germany. The new factory will have a collector capacity of 40,000 m2 annually.