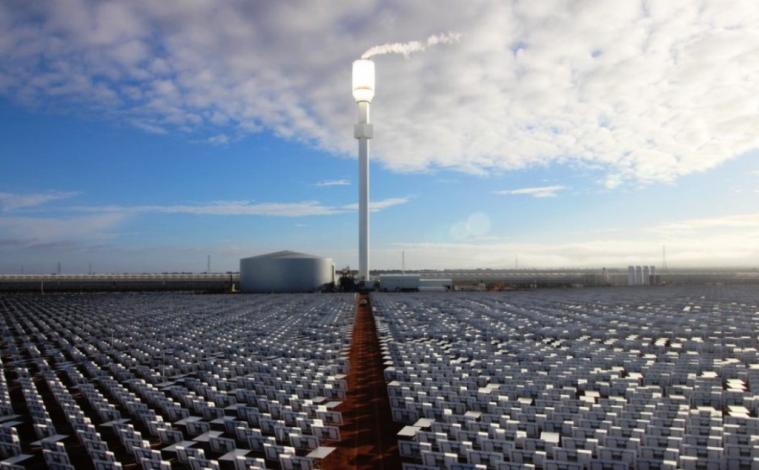 By the end of 2018, more than 500,000 m² of concentrating collector area had been installed globally to provide heat for large commercial and industrial facilities. The biggest installations were started up in China and Australia in 2016 and in Oman in 2017, while a notable number of small concentrating solar heat systems came online in India and Mexico in 2018. The photo shows an installation in the South Australian desert, where 52,000 m² of mirrors focus sunlight on a receiver on top of a tower with a height of 127 metres. The system has been supplying tomato producer Sundrop Farms with solar energy to heat greenhouses, desalinate seawater, and run a steam turbine to generate electricity.
Photo: Aalborg CSP
The largest heat-producing system, called Miraah, has been built in Oman. In 2017, US-based project developer Glasspoint brought online the first four blocks with a total of 100 MWth near the Aman West Oilfield to produce steam for enhanced oil recovery. Additional 25 MWth blocks are planned to be commissioned this year. Glasspoint designs parabolic trough collectors, putting them in greenhouses to protect the mirrors from sand and dust. 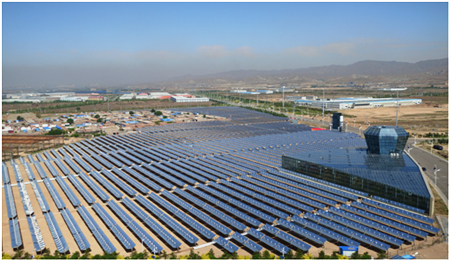 Parabolic trough collectors in Baotou, Inner Mongolia
Photo: cnste.org
The second-largest installation has been injecting thermal energy into a district heating network in the village of HongQing De, near Baotou, in Inner Mongolia, an autonomous region in China. It was put up by Inner Mongolia XuChen Energy, a Chinese supplier of turnkey systems, which installed a ground-mounted 75,000 m² field comprised of parabolic trough collectors and a roof-mounted 22,000 m² system made up of Fresnel collectors at an industrial facility. The district heating network supplies heat to a shopping centre and residential buildings. 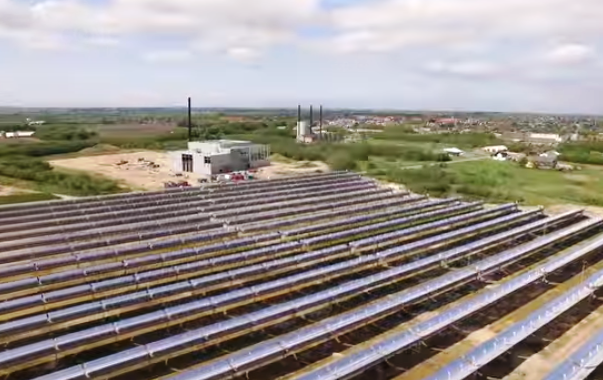 Europe’s largest concentrating collector system has been installed by Danish manufacturer Aalborg CSP. Its 26,929 m² field of parabolic trough collectors has been powering an Organic Rankine Cycle unit in Brønderslev, Denmark, since the end of 2016 to generate heat and electricity.
Photo: Aalborg CSP
Besides these showcase projects of earlier years, a handful of concentrating collector manufacturers in China, Germany, India and Mexico said they had installed a fair number of relatively small systems in 2018. Their collector area combined had amounted to 38,469 m². The statements in the following have been taken from the solar heating and cooling chapter of the Renewables 2019 Global Status Report, launched this week.
Ouyang Cheng, Marketing Manager at Vicot Solar Technology, a Chinese manufacturer of parabolic trough collectors, said that his company had completed eight projects with a total of 18,615 m² of aperture area last year, including 9,000 m² for the second part of a district heating system in Shenza.
In Mexico, the leading company for concentrating collectors is Inventive Power. Ignacio Hernandez, Project Engineer at Inventive, announced that 5,555 m² of parabolic trough collector area had been commissioned in 2018. The area had been used for 13 industrial heat systems and nine commercial properties, such as sport clubs, hotels and schools.
In addition, German parabolic trough supplier Soliterm put up a 4,320 m² solar field for a laundry in a textile factory in Bursa, Turkey.
And India has a strong supply chain for solar concentrating solutions. This should come as no surprise considering the country has been the first, as well as the only one, in the world to offer incentives for the technology under a programme launched in 2010. India’s Ministry of New and Renewable Energy, which manages the support scheme, said in reference to last year that it had paid incentives for the installation of 2,700 m² of dish collectors used in commercial cooling, two systems made by Megawatt Solutions and one system by Hatsun Agro Products, the last of which had been a joint project by Protarget and Luit Renewable.
Websites of organisations mentioned in this article:
www.glasspoint.com
www.aalborgcsp.com
www.vicot.com.cn
https://inventivepower.com.mx/solucion-en-energia-solar/
http://www.solitem.de/
https://protarget-ag.com/en/
You can download the Renewables 2019 Global Status Report by going to
http://www.ren21.net/status-of-renewables/global-status-report/
News
District Heating
Process Heat
Denmark
Inner Mongolia
Australia
Germany
Turkey
Mexico
China
Oman
India
large-scale solar thermal installations
concentrating collectors
market development
market statistics
Renewables 2019 Global Status Report
Aalborg CSP
GlassPoint
Vicot Solar Technology
Soliterm
Inventive Power
Protarget
Inner Mongolia XuChen Energy
MNRE
Megawatt Solutions