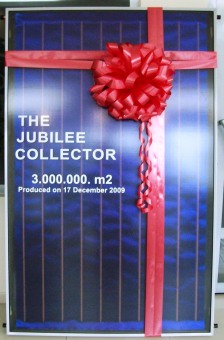 Jubilee collector on display in the headquarters building: This collector panel completed in December 2009 the total of 3,000,000 m2 of produced collector area Turkish manufacturer Ezinc Metal San. has produced since it started production in 1983. Photo: Ezinc

Together with all of its employees, Ezinc celebrated the production of the company’s jubilee collector in its factory unit on the 17th of December. It informed the public about this event in a press release sent out on the 25th of January. The company started producing solar thermal components in 1983. In 2007, Ezinc increased its production capacity by purchasing an automated ultrasonic manufacturing line for full-plate absorbers.

Germany dominates the 2008 ranking of the largest flat plate collector manufacturers around the world.  Solarcap’s figure is the result of aggregating the production of its three subsidiaries Heliodyne, Emmvee and Arcon. Source: solrico/S&WE

The results of the international market study about the solar thermal industry can be downloaded on: http://www.solrico.com/en/solar-market-research/world-map-2008.html