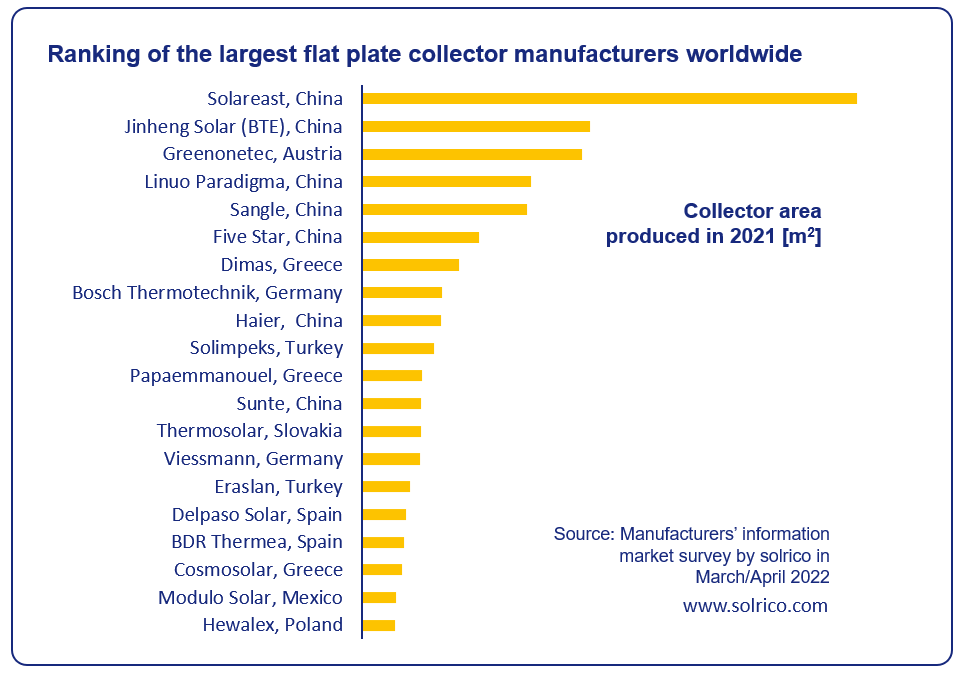 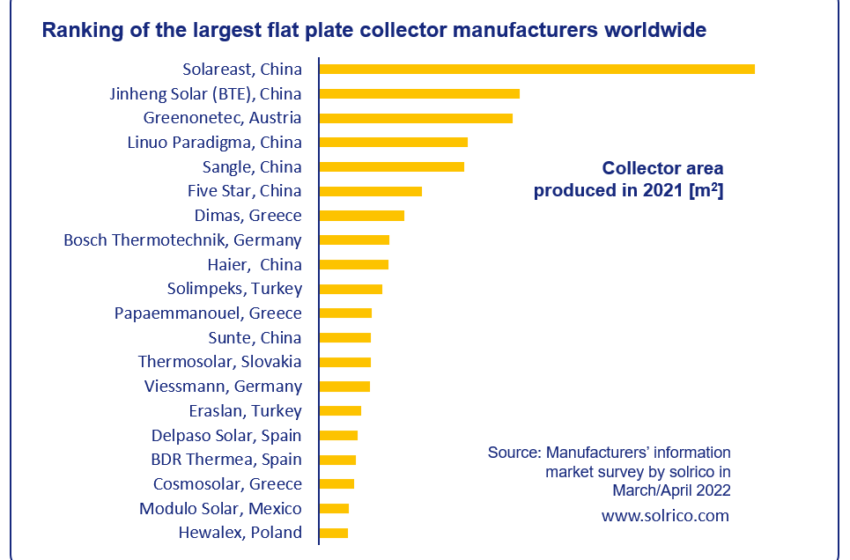 Consolidation among the global solar thermal industry continued in 2021. The 20 largest flat plate collector manufacturers listed in the ranking managed to increase production by, on average, 15 % last year. This is significantly higher than in the previous year, with 9 %. The reasons for the growth are manifold and depend on the region. The increasing interest in the use of renewable heat to avoid higher fossil fuel prices was one of the reasons for growing sales mentioned by a European manufacturer. Some of the large producers in Europe also consolidated their market position by receiving new orders for OEM collectors from smaller producers who had closed their factories in response to years of declining sales. The Chinese companies in the listing profited from a growing number of large orders from the housing industry for solar water heaters or central hot water and space heating systems. This increasing demand resulted from the overall economic recovery in China following the pandemic-related lockdowns in 2020.
Figure: solrico

The supplier rankings are updated regularly by German consulting firm solrico. The 2021 list is based on a manufacturer survey conducted in March and April 2022. The horizontal axis in the chart was left blank, as a few companies were reluctant to share their production figures publicly. You can view the previous two rankings for 2020 and 2019 by clicking on the hyperlinks in this paragraph.

The 20 companies in the ranking produced in total close to 6 million m2 (4.2 GWth) in 2021. In comparison, around 1.4 GWth solar thermal capacity was installed in Europe in 2020 (latest data available) – almost exclusively flat-plate collectors and in China flat plate collectors with a total capacity of 5 GWth were added in 2021.

Nine out of 10 European manufacturers in the listing were satisfied with sales development in 2021. This is very understandable, since the companies from Austria, Germany, Greece, Slovakia, Spain and Poland were able to increase their collector production, on average by 21 %. This was an absolute trend change given the fact that a year earlier the companies had to cope with a decline in their production volumes of 12 %.

The reasons for the trend change included the consolidation mentioned above as well as the improved policy support structure in Europe. This has led to a boom in building renovations including replacement of existing boilers. Other manufacturers mentioned that they were able to capture new sales opportunities from Chinese competitors in overseas markets. A multiple increase in transport costs to Europe and the Americas slowed down Chinese exporters last year.

A total of 5570 m2 of flat-plate collectors were installed at Logistics Vocational and Technical College in the southern Chinese province of Guangxi. The collector fields are located on the new buildings of the extended dormitories. They provide hot water for showers for 6,500 students, backed up by heat pumps. Photos: Five Star

2021 saw a number of changes in the ownership of companies, which influenced the ranking.
At the beginning of 2021, Greenonetec, Austria, was back in the hands of its founder Robert Kanduth. He re-acquired the 51 % ownership stake sold to the Chinese company Haier in May 2017. The two companies are now listed independently again in the chart.

Along with the addition of the Greek company Papaemmanouel to the ranking for the first time, two companies, Emmvee (India) and Nobel (Bulgaria), which had secured places in recent years, were pushed out of the listing.
The 2021 sales of Bosch Thermotechnik, Germany, dropped slightly, because they sold the Brazilian subsidiary Heliotek to the local competitor Pro-Sol. This ended an era lasting almost ten years. Bosch Thermotechnik had acquired Heliotek in 2012.

The acquisition by Ariston (Italy) of Chromagen, Israel, in 2021 did not affect the ranking because Ariston chose not to report production numbers in this year’s survey.

Can you agree with the following statements? 17 of the ranked companies answered this block of questions. The figure below summarises their answers for selected statements. All companies globally confirmed that they had to increase their collector prices and reduce margins during 2021 because of increasing material costs. Recovery funds to overcome the impact of the pandemic had a positive impact on the sales of the large collector producers. 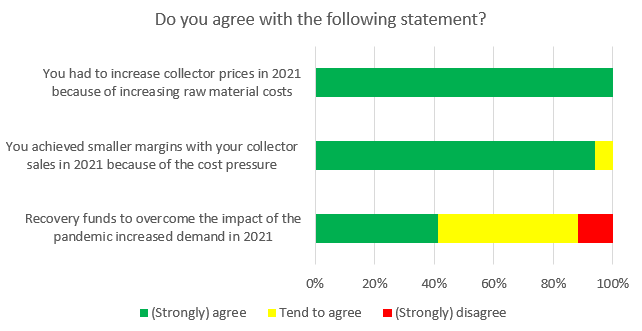