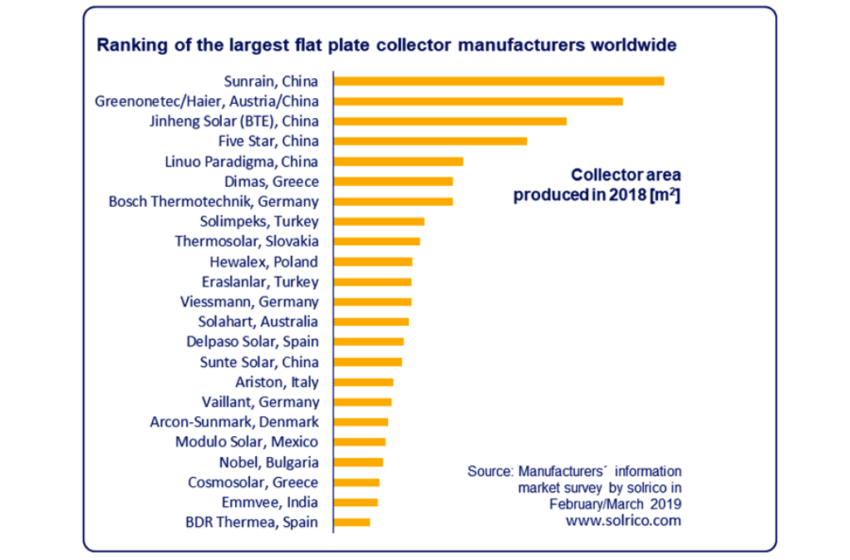 2018 saw much consolidation in the global collector industry. In spite of a shrinking market around the world, however, the largest flat plate collector manufacturers managed to increase production output by 7 %. Their success was due to steadily growing sales in China and the bright prospects in southern Europe, where businesses increased their export activities. The supplier rankings is updated regularly by German consulting firm solrico. The 2018 list is based on a manufacturer survey that was carried out in February and March this year. The two rankings created in 2016 and 2017 can be viewed by following the links in this paragraph.
Source: solrico / data supplied by manufacturers
For the second time in a row, Chinese-based companies dominated the list of the world´s largest flat plate collector manufacturers. All five top spots are held by businesses headquartered in the People’s Republic, starting with Sunrise East Group, which includes the Sunrain and Micoe brands, and Haier, which acquired a 51 % stake in Austrian-based Greenonetec in May 2017 (both production figures are added up in this year`s chart). The third is Jinheng Solar, which owns the export brand BTE Solar, followed by Five Star. Then comes Linuo Paradigma, which has made it onto the list for the first time, just like Sunte Solar, which, according to General Manager of Global Sales Alon Ryan, bought Pengpusang in 2016. Pengpusang held the rights to the Prosunpro brand and had been one of the larger flat plate collector manufacturers in China. It was part of the rankings until 2015 when it started running into financial trouble.
The production volume of the four Chinese companies participating in the survey in 2017 and in 2018 grew by 15 % if Greenonetec’s figures are excluded. Key drivers of growth were high-rise residential buildings, where flat plate collectors are integrated into the facade next to the balconies of individual flats.
Jinheng Solar and Linuo Paradigma expanded their production capacity because of high demand. “In 2018, we added automated assembly lines, so we now have four of them, as well as six laser-welding and two ultrasonic machines. This has increased production speed to 55 seconds per unit,” said Judy Wang, Sales Manager at Jinheng’s BTE Solar subsidiary.
Germany slows down, Poland speeds up
The business satisfaction of manufacturers depended largely on location. The three German heating boiler manufacturers, Bosch, Viessmann and Vaillant, reported, on average, 8 % lower sales than in 2017 due to Germany’s steadily shrinking market.
By contrast, Polish flat plate collector manufacturer Hewalex benefitted from strong tailwinds which helped more than double its sales last year in comparison with 2017. Ireneusz Jeleń, Marketing Manager at Hewalex, said that thanks to the Clean Air programme, the business had been able to deliver about 4,300 residential solar water heaters to seven municipalities. The government-funded scheme helps municipalities promote efficient boilers by supporting the installation of solar thermal or biomass heating as part of the country’s air quality agenda.
Southern European producers increase exports
2018 was also a good year for the largest flat plate collector manufacturers in southern Europe. The seven manufacturers based in Turkey, Spain, Italy and Greece were able to increase sales by 8 % on average. Greek manufacturer Dimas stated rising demand from the Middle East and new markets in Latin America as the reasons for the company’s growth. Italian-based Ariston seemed pleased with thermosiphon sales, especially in the Caribbean and Middle East. Turkish supplier Eraslanlar reported that it was implementing large-scale SWH projects in refugee camps in Iraq, Syria and Turkey.
Back to being number one in SDH
This time, Danish flat plate collector manufacturer Arcon-Sunmark is again back in the rankings after a difficult 2017, which showed rather low production figures. Together with its Chinese joint venture partner Sunrain, it completed a 15.6 MWth collector field in Tibet and, at the same time, managed to install nine solar district heating (SDH) systems in Europe, as well as expand three SDH plants. Its spot on the list is based on the collector area of all systems it commissioned last year, as the management does not provide actual production figures.
No figures on x-axis
The chart above does not have figures along the horizontal axis, since some companies did not want to publicly share their total production output. All businesses from 2017 are on the 2018 list as well, in addition to the two Chinese-based manufacturers mentioned above. Soletrol based in Brazil and Chromagen based in Israel had been regular participants in the survey until 2016. This year they did not provide any figures for the second time in a row and therefore no longer show up in the rankings.
Notes
Companies mentioned in this article:
http://www.solrico.com
http://en.sunrain.com/
http://www.greenonetec.com
http://www.btesolar.com/
http://www.fivestarsolar.com/
https://www.bosch.com/
http://arcon-sunmark.com/
http://dimas-solar.gr/
http://www.solimpeks.com/
http://www.viessmann.com
http://www.thermosolar.com/
http://www.solahart.com/
https://www.eraslan.com.tr/
https://nobel.bg/
https://www.vaillant.de/heizung/
http://delpasosolar.com/
http://modulosolar.com/mx/
http://www.haier.com/water_heater/
http://www.linuo-paradigma.com&nbsp;
http://www.cosmosolar.com/en/
http://www.aristonthermo.com/en/
http://www.hewalex.eu/
https://www.bdrthermeagroup.com/
https://www.emmvee.com/
http://www.suntesolar.com/