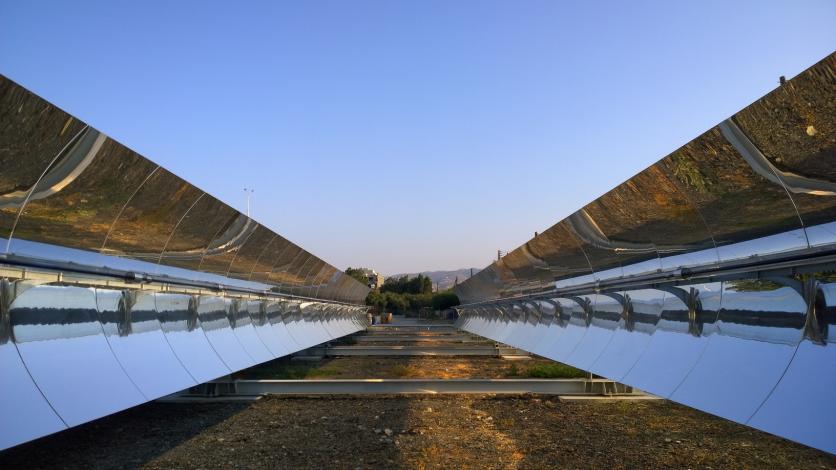 Homeowners and businesses in Cyprus showed growing interest in solar thermal technology over the last two years. Collector area additions on the island increased by 5 % in 2018 and by 24 % in 2019 after a small decline in 2017. The growth in collector capacity was the result of an overall good economy and the grants that the government offered for residential solar thermal systems. The photo shows one of the most recently added industrial solar heat systems, designed and installed by German supplier Protarget in 2018. This field of parabolic trough collectors has an aperture area of 288 m2 and provides high-temperature steam for Kean Soft Drinks' juice factory in Limassol.
Photo: Protarget
“The growth in the construction sector and the government’s campaign to get more energy-efficient installations, including solar systems, up and running have had a positive impact on the solar thermal market,” said Panayiotis Kastanias, of the Cyprus Employers and Business Owners Federation, known as OEB. The campaign included flyers, TV adverts, hoardings and social media outreach. Furthermore, Kastanias added, the country’s solar thermal manufacturers have steadily improved their products and have invested in research and development as well. In all, they produced between 60 % and 70 % of the annual collector additions in the last years, with the remainder being imported mostly from Greece and China.
The country’s grant scheme for solar water heaters has been in place since 2006, although the budget for incentives is approved on an annual basis. In 2019, the government made EUR 300,000 available to fund about 1,000 systems. Replacing an entire system is supported with EUR 350; exchanging only the collector panels will net applicants EUR 175. Because of Covid-19, this year’s grants will reportedly be distributed no earlier than June.
The data on the growth of Cyprus’s solar thermal market originates from annual surveys conducted by the Cyprus Association of Solar Thermal Business Owners (EBHEK). The figures for the flat plate collector area were estimated based on data supplied by the country’s statistical office.
Storage allows heat delivery 24/7
The currently largest SHIP plant on the island is a 760 m2 pilot system that was installed at a copper mine in 2013. Put up by Jordan-based Millennium Energy Industries, this field of flat plate collectors uses three solar loops to deliver heat at temperatures ranging from 20 °C to 50 °C to the copper plating baths on site.
The SHIP system put up at Kean Soft Drinks, one of Cyprus’s largest fruit juice producers, is also used for demonstration purposes and has a number of distinctive features. Highly efficient vacuum receiver tubes incorporated into the parabolic trough collectors of the system and a silicone-based thermal oil make it possible to generate steam at up to 425 °C. This steam is used to pasteurise and preserve the fruit juice produced in the factory and reduce the consumption of heavy fuel oil (HFO) by about 15 % annually. The thermal oil was developed by Wacker Chemie, Germany, in collaboration with Protarget, which aimed to create a heat transfer fluid that would not break down even at 400 °C to 450 °C.
“By integrating the SolidTES thermal storage system, steam can be generated around the clock, since it is an essential component of most industrial processes,” said Martin Scheuerer, Managing Director of Protarget, a German-based technology supplier and project developer. SolidTES was developed by Spanish-based CADE Engineered Technologies and consists of modules that allow solid-state storage at up to 500 °C. The modules are composed of solid blocks filled with a mineral composite that shows high thermal performance, with steel tube heat exchangers running across them (see photo below). At Kean Soft Drinks, thermal oil is used as the fluid transferring heat between the parabolic trough collectors and the storage system, but SolidTES can also be charged and discharged by using molten salt, air, pressurised water or steam. 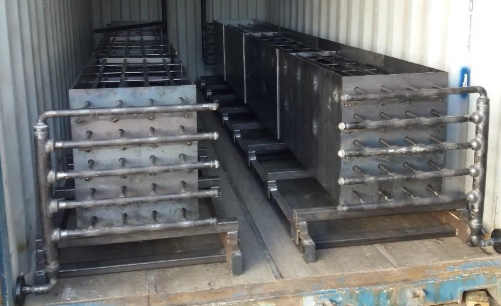 SolidTES module installed inside a container at Kean. The module has a storage capacity of 300 kWh. Depending on requirements, the solar system switches fully automatically between the supply of heat to the steam boiler or to the storage tank. Photo: CADE Engineered Technologies
“Feeding solar thermal energy directly into the existing steam infrastructure of our factory lowers the fuel consumption and the carbon footprint of our conventional fuel boilers significantly,” said Stelios Constantinou, Technical Manager at Kean. The thermal oil is heated to 425 °C to generate steam in a heat exchanger that has the required operating temperature of 185 °C, as used in the factory’s steam grid.
“The concentration solar thermal system has been running for two years and has proved itself to be a reliable and cost-effective source of thermal energy. It also requires very little maintenance,” said Constantinou. “As a result, we have decided to expand our existing solar facility to further reduce Kean’s dependence on fossil fuel and lower CO2 emissions.”
As part of Kean’s strategy to improve energy efficiency, Protarget has designed and commissioned a 220 m² CPC vacuum tube solar field that runs at over 100 °C to preheat boiler feed water to 85 °C. Since being commissioned in early 2020, the system has contributed a great deal to the company’s cost-cutting efforts, as it has lowered fuel consumption by 10 % a year. 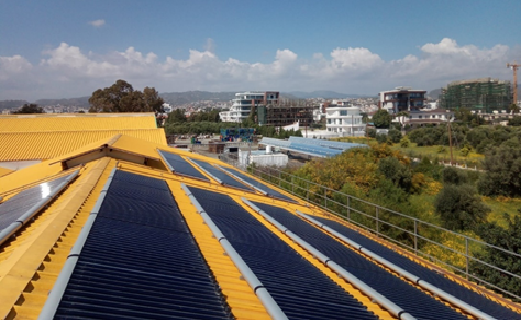