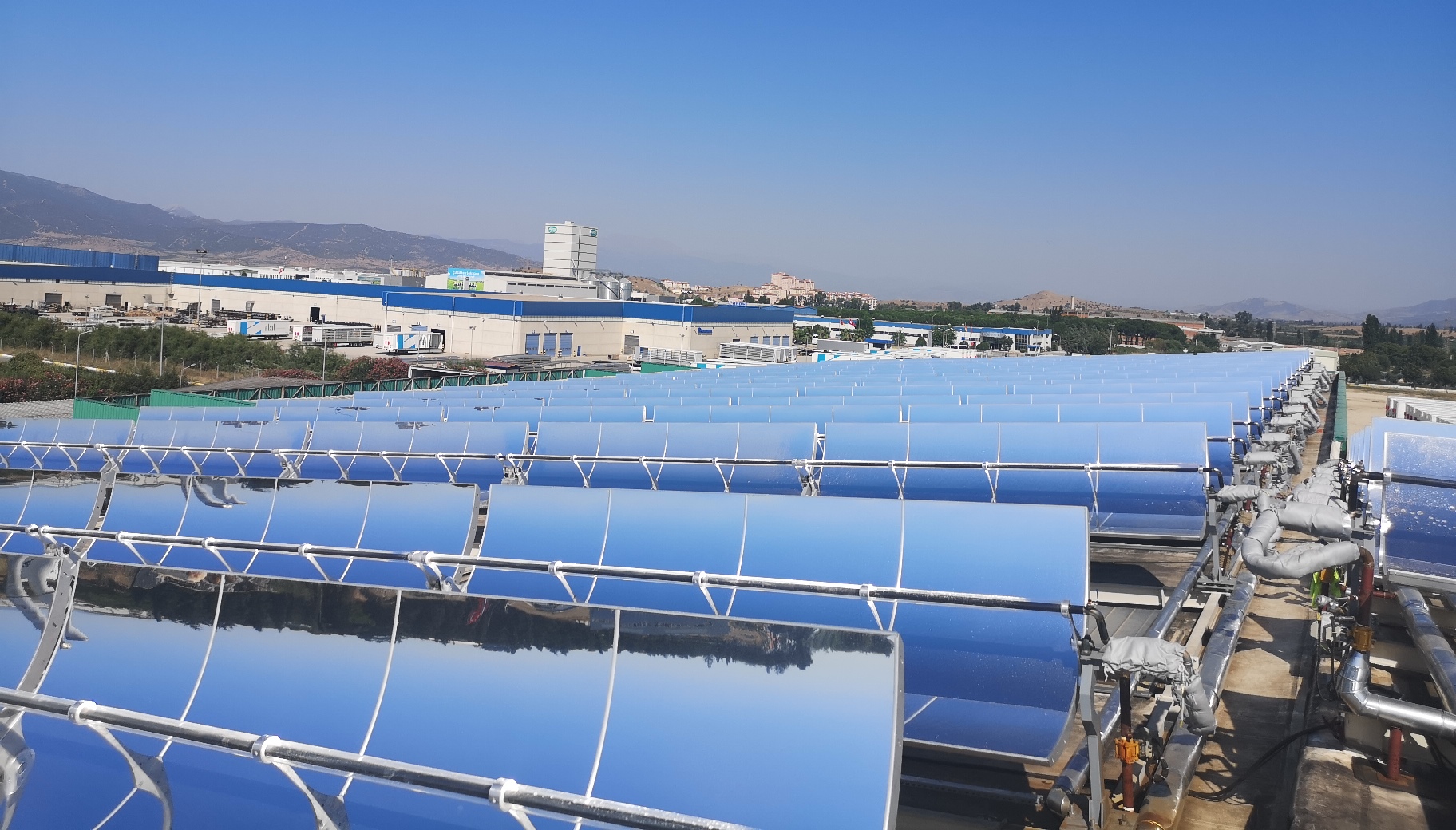 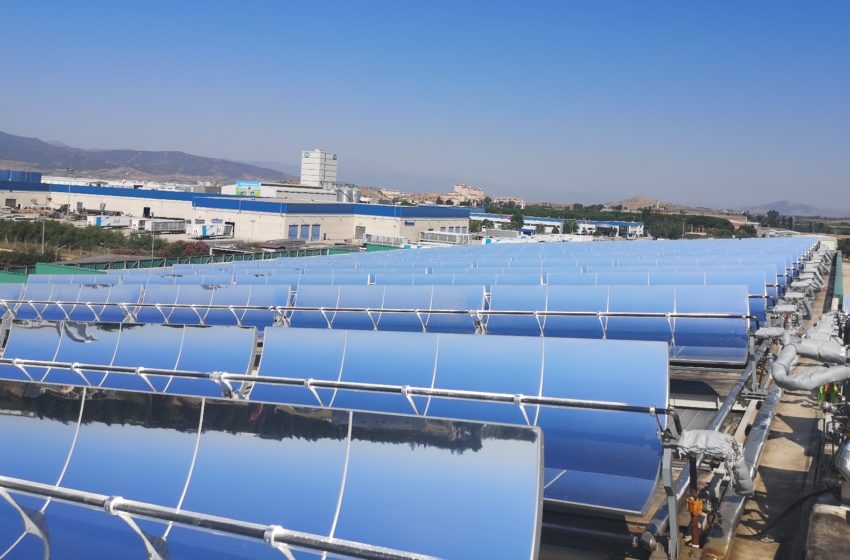 In Germany, demand for high-temperature solar process heat is growing rapidly. In the past months, Soliterm, a western German provider of turnkey solar process heat (SHIP) solutions, has conducted an ever-greater number of prefeasibility studies in several sectors, especially in the food industry. Interest grew as the government introduced a EUR 25 per-tonne carbon price on heating fuel at the beginning of this year while continuing to offer high incentives covering up to 55 % of SHIP investment costs. Soliterm has already built multiple large plants in Turkey, which is home to its parabolic trough collector factory. The photo shows the first part of a planned 4,500 m2 (3 MWth) field commissioned in July 2020 in Izmir, Turkey. Its 500 PTC1800 collectors supply heating and cooling for a processing facility owned by one of Soliterm’s clients, a packaging business.
Photo: Soliterm
“We provide clean industrial heat, which is an increasingly important source of energy for food and beverage companies. More and more of their customers are now asking for sustainable products with a small ecological footprint,” said Deniz Lokurlu, Global Sales Director at the Soliterm Group. “Green electricity is important too. But we offer a key pillar for decarbonising the heating and cooling industry, a pillar that will prove essential to reaching German climate targets.”
Lokurlu lists a number of factors currently driving industrial demand for green heat solutions:
Strategic partnerships
To serve the German SHIP market, which is characterised by long project development times and sizable prefinancing needs, Soliterm has partnered with Essen-based energy provider E.ON’s B2B Sales department. “Together with E.ON, we are speaking to commercial heat consumers, such as laundries, dairies, breweries, municipal utilities and meat plants and are confident that we will sign the first contracts for implementing SHIP or SDH projects this year,” said Lokurlu.
Reaching another important milestone in establishing the company in Germany’s renewable heat sector, Soliterm has also begun to build a demonstration plant near its headquarters, at the Fraunhofer Institute in Bochum. The plant, which will be run together with a geothermal storage unit, will initially provide about 100 kW of heat when it is commissioned this year – a capacity that is said to increase in later stages of the R&D project.

Clean heat generation units put up on the roof of a Metro parking lot in Antalya, Turkey, provide the heat needed for the supermarket chain’s on-site air conditioning system.
Photo: Soliterm
Fully automated production line
Soliterm was founded in 1999 by Managing Director Dr Ahmet Lokurlu. In 2003, the company commissioned its first parabolic trough collector system, a cooling installation, in Turkey. Since then, it has brought online more than 20 commercial solar heat plants in Turkey, Italy, Cyprus, Mexico, Morocco and Jordan. Another five supply heat for butcheries in Herat and Kabul in Afghanistan. Soliterm’s customers include Metro, Nestle and PepsiCo.
In 2011, Soliterm put up a fully automated production line in Ankara, Turkey, doing away with the manual collector production process that had dominated work at the company since the turn of the millennium. Its new, fourth-generation parabolic trough collectors are now in the design phase, with manufacturing expected to start sometime this year.

Soliterm said its annual production capacity is roughly 250 MW, which corresponds to about 40,000 collectors produced each year.
Organisations mentioned in this article:
http://www.solitermgroup.com/en/index.php