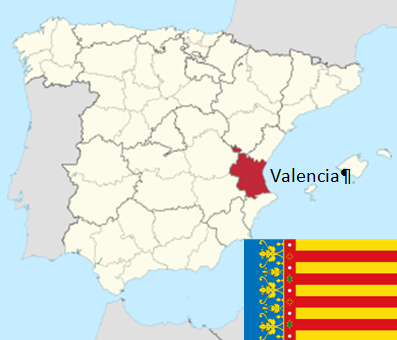 From 10 December on, the government of the Spanish region of Valencia has been accepting applications from those institutions and enterprises willing to utilise renewable energy sources such as solar thermal. The overall budget of the Programa de Energias Renovables y Biocarburantes (translated as Programme for Renewable Energies and Biofuels) is EUR 145,000 and its grants cover up to 45 % of the solar thermal system costs. Investors can submit the application forms to the Valencian Institute of Business Competitiveness, IVACE, until 28 December 2014 (see attached document).
Map: Wikipedia
After five years in decline, the Spanish solar thermal market showed a slight increase of 1.5 % in 2013. Sector representatives agree that this turnaround was mainly a result of the overall GDP and economy growth, as well as the recovery of the housing construction segment. In addition, there are some new but scattered local and regional incentives, such as the Barcelona ones, which could help stabilise the market.
Subsidies require maintenance contract of three years or more
One of these regional support schemes has just been established in Spain’s Valencia region with its 5.1 million inhabitants. On 10 December, the regional government started accepting applications for the Programme for Renewable Energy and Biofuels. Its total budget adds up to EUR 775,000, of which 80 % have come from the European Regional Development Fund (ERDF).
Regarding solar thermal systems, the subsidies require maintenance contracts agreed upon with certified installers and lasting three years or more. The solar thermal amounts are capped at 812 EUR/m² for a system of up to 20 m² and 710 EUR/m² for systems above 20 m².
The disadvantage of the incentive scheme is its short deadline – the last date for submitting applications is 28 December 2014 – and the relatively small amount of funding available: EUR 145,000 for solar thermal, with the possibility of up to EUR 400,000 for hybrid solar thermal-biomass systems. The cap will only enable scheme administrators to support around 450 m² of collector area, not including the hybrid solar thermal-biomass option.
Other regions to approve incentives in 2015
Last year, Valencia offered some EUR 750,000 for solar thermal technology as part of the same subsidy scheme. Between 2006 and 2013, the region’s overall subsidy amount for solar thermal added up to EUR 12.4 million. The cumulated solar thermal area installed by the end of 2013 was roughly 150,000 m² – 5 % of Spain’s total figure.
This Valencia initiative may seem like a merely modest effort, but some other regions, such as Andalusia, Basque Country and Castile and León, are expected to approve regional incentives in 2015. These incentives, together with the national Technical Building Code and the economic recovery (1.7 % of GDP growth expected by the EU in 2015) might bolster the recently slight increase in Spain’s annual market volume.
More information:
http://innovacion.ivace.es/index.php?option=com_content&task=view&id=2031&Itemid=375
https://solarthermalworld.org/wp-content/uploads/2014/12/valencia_incentive_programme_november_2013.pdf