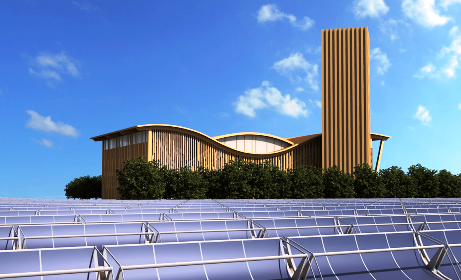 In February, Alcalá Ecoenergías signed a deal to construct a district heating system powered by solar and biomass in Alcalá de Henares, a city in Spain. The agreement between the local company and the municipal government will lead to one of the country’s first-ever large-scale solar district heating systems, intended to provide 12,000 homes with renewable heat. The EUR 38 million investment, of which EUR 32 million have been allocated for biomass and EUR 6 million for solar thermal, near Spain’s capital of Madrid is expected to be completed by late 2019 (see the design study on the left). Several other solar district heating projects are under development.
Source: Ayuntamiento de Alcalá de Henares
Although solar district heating, or SDH for short, is making headway in countries such as Denmark, its potential has barely been tapped in Spain, which shows roughly double the irradiation levels of northern Europe. To date, most installations, such as the Balearic Islands’ technopark on Mallorca, have been no more than pilot projects. The district heating systems installed last year were all biomass-fired ones. Two examples are the 50 MW Districlima project in Barcelona and the 12 MW plant in Móstoles.
However, things may change in the foreseeable future. On 1 February, Alcalá Ecoenergías signed an agreement with the Alcalá de Henares City Council to set up a 30 MW biomass boiler and a 14 MW field equipped with concentrated solar thermal technology for the municipality. Teo López, Managing Director of Alcalá Ecoenergías, explained that the solar thermal system had yet to be fully specified and that his company was considering two technologies, namely linear Fresnel and parabolic trough collectors. “We intend to start building the solar plant by early 2019 and produce hot water through solar thermal at a temperature of 130 °C to 140 °C,” he said. “We have already identified the land for the installation and signed contracts with all investors.” López added that the new district heating network would have a supply temperature of 110 °C and a return temperature of 70 °C.
Renewable heat goes local: pruning waste and solar
According to Olga García, Deputy Mayor and Cabinet Member for Infrastructure in Alcalá de Henares, suitable locations had been identified for both the biomass plant and the solar field. “We wanted to combine several technologies for this project. We were aware that solar hadn’t been part of other district heating projects, so we’ve decided to introduce it as the perfect match to our local biomass surplus. It is going to be, by far, the largest solar thermal district heating system in the country to date,” she said.
García said that the idea was to use local resources to create a self-sustaining, renewable project. “As an example, we spend around EUR 24,000 per year on the disposal of pruning waste, which will be fed into the biomass plant. Solar is another local resource and we’re even thinking about using photovoltaic units to power the biomass system. We want to turn this into an almost entirely self-sustaining project.” She said that funding would come from several sources. One of them was a Proyectos Clima agreement, via the environment ministry. This agreement makes it possible to receive a set amount, around EUR 10, per tonne of CO2 avoided. Another would be the 20 % investment subsidy based on the PAREER-CRECE support scheme.
Other contributions would come from the Institute for Energy Diversification and Saving (IDAE) and the European Regional Development Fund. Around 25 % of the investment had been provided by private investors and the project’s developer, Alcalá Ecoenergías. López said that the installation was expected to be up and running for more than 25 years and pay off in less than a decade. Both systems combined would also reduce end users’ energy bills by an estimated 15 % to 30 %.
“Alcalá’s mayor, an engineer and supporter of renewables, has been a firm backer of this project,” López said. “We expect that our demonstration plant will make us a first mover that will encourage other towns and cities in Spain to deploy SDH systems.” Municipalities such as Brunete, Fuenlabrada and San Sebastián de los Reyes have announced similar projects, although their plans seem not as advanced as the ones in Alcalá.
Organisations mentioned in this article:
Alcalá Ecoenergías: http://alcalaecoenergias.com/district-heating/
Alcalá de Henares: http://www.ayto-alcaladehenares.es/portalAlcala/contenedor2.jsp?seccion=s_fnot_d4_v1.jsp&contenido=24565&tipo=8&nivel=1400&language=es&codResi=1
Proyectos Clima: http://www.mapama.gob.es/es/cambio-climatico/temas/proyectos-clima/
Balearic Islands’ technopark: http://www.parcbit.es/wparcbitfront/