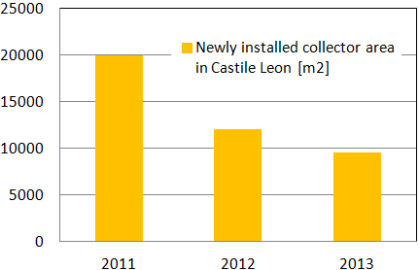 The largest region in Spain, Castile and León, has launched a new incentive programme for energy efficiency measures and renewable energies such as solar thermal, geothermal and biomass. Groups of flat owners, individual home owners, as well as public institutions can submit applications to the regional authorities until 11 March 2015. Castile and León, with a population of 2.5 million, had a total installed solar thermal capacity of 154,000 m² by the end of 2013, which represented 4.8 % of the total installed capacity that year and corresponds with the fact that the region accounts for 5.4 % of the country’s total population. Newly installed collector area, however, has gone down over the last years according to data from the Spanish Institute for Energy Diversification and Saving, IDAE.
Figure: IDAE
Across most of Spain, one finds many regional solar incentives, although sometimes, the public is not well aware of them. The reasons for this lack of awareness may be short programme periods, lack of publicity and the limited budgets available.
In December 2014, the government of Castile and León approved its new incentive scheme for building refurbishment. A direct subsidy is paid for renewable technologies which lower energy consumption. Item A of the attached document, Castile and León 2014 Grant Level, shows the amount of subsidy that is granted:
Short application periods common among Spain’s regional subsidy schemes
Consequently, owners of solar water heaters may only receive the subsidy if the systems are combined with better insulation or a biomass boiler in order to achieve the 30 % or 50 % reduction.
The budget available for disbursement is close to EUR 2 million, but the submission deadline ends on 11 March. This has been a common phenomenon among most of Spain’s regional subsidy schemes for solar thermal: a short period of availability. A recent example was the Valencia region (see http://www.solarthermalworld.org/content/spain-solar-thermal-incentives-valencia), where the government announced the launch of a subsidy on 10 December and set the submission deadline to 28 December (barely 18 days to apply). According to Pascual Polo, General Secretary of the Spanish solar thermal association, ASIT, it is quite complicated to get most of these incentives because “by the moment [the scheme] goes public, most subsidies have already been awarded to a few applying public administrators or group of flat owners. Deadlines are so short and budgets are so small that it becomes very difficult for private homeowners to apply.”
According to ASIT, a new nationwide solar incentive programme receiving European funds may be approved over the coming 12 months. Details are sketchy, however; a proposal has not yet been published. These new incentive schemes may have both a national and a regional part and offer an impetus to growth.
More information:
ASIT: http://www.asit-solar.com
For more information on the subsidy scheme, see the Castile and León government website