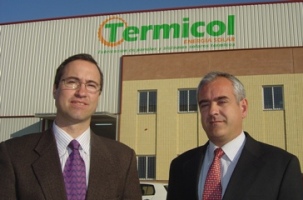 The financial crisis keeps the Spanish solar thermal market in deep troubles this year, a result of the tremendous drop in construction orders. According to first-quarter estimations by the building industry, the number of newly constructed houses this year could constitute only a forth of last year’s projects. So far, the CTE building regulation, which made it obligatory to install a solar water heater in a new building, has not had the effect on the market expected three years ago, when the law was approved.

Nevertheless, a lot of Spanish companies invested in new factories or expanding existing production units due to the booming demand, which had been anticipated in the solar thermal sector. Termicol Energía Solar is one of them. The collector and absorber manufacturer in Sevilla, in the south of Spain, is defending its part of the market well and even registers a small increase this year, instead of the widely announced drop in sales. Solarthermalworld.org spoke to the company’s founders, Julio Castro and Angel Martínez.

? You have just invested 1.5 million EUR to extend your collector factory near Sevilla. Was it the right decision in times of a dwindling solar thermal market in Spain?

Martínez: The decision to invest was made not only by looking at the Spanish market, but at our international expansion as well. When we outlined our strategic plans for 2007, no one could have imagined the depth of the crisis we are now suffering from. We had continuous annual growth rates over 30 % and in September 2006, the national government approved the building law, so the expectations were very high. The slowdown has forced us to increase our efforts in going international a bit earlier than planned, but the investments were necessary anyhow. We began selling in Portugal and will enter other national markets in 2010, in order to compensate for the shrinking market in Spain.

? How did you invest the money and what were the objectives of your investment?

Castro: We invested almost 1 million EUR in a new building complex, which includes a warehouse, offices, production facilities, as well as an R&D laboratory. The rest was used to buy machinery – for both the manufacturing line of absorbers and the assembling line of collectors. All in all, we had three objectives: an increase in capacity and productivity and improvements in quality – and we reached all of them. Our production capacity has increased from 45,000 m2 in 2007 to 160,000 m2 in 2009 and we are in the process of obtaining the Solar Keymark certification.

? According to the Spanish industry association ASIT, market volume will decrease by 20 to 30 % this year. You want to again reach the quantity of m2 produced last year! What are the success factors of your sales strategy?

Martínez: By the end of September 2009, our production and sales figures were 4 % higher than the year before, and we expect to improve on that growth rate within the next months. Although two years ago, our previsions were much better, we are aware of the current situation and pretty satisfied with our results. The reasons: We manufacture a wide range of quality collectors and kits at competitive prices, and we focus on servicing our clients. We made a commercial strategy based on distributors all over the country and have maintained and respected our close relation even in times of crisis. We have also increased our OEM sales, a strategy we want to reinforce primarily in other countries.

Castro: In times of crisis, service to the client is essential. The time of delivery must be very short and you must be flexible in your production capacity, in order to deliver everything JIT. Not everyone can buy a whole container as before. Furthermore, our clients are distributors or other manufactures (OEM sales), which require fast and efficient technical support by Termicol´s professional service team.