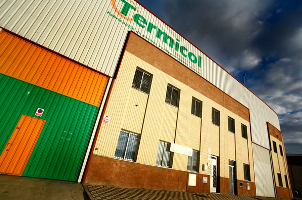 One of the biggest Spanish collector manufacturers, Termicol, can still celebrate its 10th anniversary this year. The company has managed to counter the decline in the Spanish market by expanding its business abroad. Today, the export of collectors generates 20 % of the company´s turnover. With its own brand, Termicol claims a market share of around 10 % in its home country.
Photo: Termicol

Although the National Renewable Energy Action Plan (PER) was approved by the Spanish government in November 2011, Termicol´s export manager Jacobo Romero Cortés does not have high expectations of it. “The future of the Spanish market is an uncertain one,” Romero Cortés says. The PER does speak of an announcement of a feed-in tariff for renewable heat, but it has so far been entirely unclear when this tariff will actually come into effect. There has not even been a draft about its details yet, as Pascual Polo of the Spanish Solar Thermal Industry Association, ASIT, confirmed in an interview with solarthermalworld.org.

Still, the company counts with an increase in production because of its thriving export business. Since 2009, Termicol has been selling collectors and solar systems to Portugal, Romania, Italy, France, Morocco, Chile, Mexico, Mauretania and the USA. The company´s highly selective collectors have just received the SRCC OG-100 rating and do now fulfil the requirements for incentive programmes in the USA. The company´s black chrome collectors have also just received the Solar Keymark, an important step towards selling more collectors on European markets. “France and Portugal are our most important export markets,” Romero Cortés says.

In case of Termicol´s most recently entered export market, Chile, the company has just started working together with a not yet named importer this summer. According to Termicol, its new partner has a major share in the country´s heating market and will possess the exclusive rights to distribute Termicol’s products. Because of the similarities with the Spanish language, culture and also the solar building regulations, Termicol has enjoyed a good start in Chile. “It is a lot easier to introduce our collectors in Chile than it was in Italy or France. We do have high expectations in terms of market share. However, the country is small, which means total sales will be limited.”

Even the current production increase has not come to close to exhausting Termicol’s manufacturing capacities. After the boom in 2007 and 2008, the factory’s annual production capacity increased from 45,000 m2 to 160,000 m2 in 2009. Meanwhile, Termicol has reduced the time it takes to solder the absorbers and is now working in batches, expanding the production capacity to, all in all, 240,000 m2 – without having to set up new production lines. In 2011, the actual production was 25,000 m2 and because of the increasing exports, this figure is expected to rise to 30,000 m2 this year.

Termicol puts a lot of effort into developing new collectors and systems. In spring 2012, they will start to produce a new range of collectors with 0.4 mm aluminium fins instead of 0.2 mm copper fins. However, the current collector type with copper absorbers will still be available then, Romero Cortés assures. Compared to the current models of highly selective collectors, the new type will be 5 to 7 % more efficient. For black collectors, the efficiency increase lies between 10 and 12 %. At the same time, Termicol expects to lower its manufacturing costs even further.