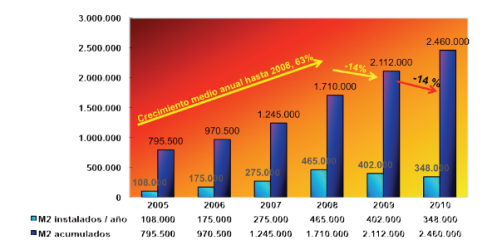 The Spanish solar thermal market again suffered from a slowdown in 2010. According to the latest market survey by the Spanish Solar Thermal Association ASIT, the 2010 market volume of 244 MWth (348,000 m2) is 14 % below the result of 2009. The light blue columns in the chart show the real sales volume in a specific year, whereas the dark blue columns stand for the targets of the Renewable Energy Plan. ASIT is fighting hard for a new incentive scheme which could bring the market back to significant growth rates and has announced its first results.
Figure: ASIT

“Over the last years, we have strongly promoted a feed-in tariff for solar heat generated by commercial installations, because we are convinced that this measure will bring significant growth in the important segment of larger solar heating systems,” Pascual Polo, Secretary General of ASIT, explains. The model is now mentioned in the draft of the new National Renewable Energy Plan 2010 – 2020. Polo hopes that the Renewable Energy Plan can be approved by the Parliament in June or July this year.

It is a great success for ASIT that the administration has accepted much of what the association proposed. The crucial idea behind ASIT’s concept is that the fee per produced solar kilowatt-hours will be paid to an Energy Service Company (ESCO) only. “The ESCO earns good money if the solar thermal system works well. It guarantees that the installed commercial solar thermal systems are of high quality. ESCOs are good stakeholders because they have experienced staff in the field of engineering and energy production,” Polo explains the advantages of the model which also convinced the politicians. Typical clients would be hospitals, hotels or industrial producers. The feed-in tariff is eligible for solar, geothermal and biomass heat. The Renewable Energy Plan does not require upper limits for the size of the renewable heating system.

The ESCO receives a certain fee per kilowatt-hour by the administration and the client. The level of the granted fees must be fixed in a way that the ESCOs receive a good return of investment within a minimum of 10 years. This will be done in a second step. Once the Renewable Energy Plan is approved and, therefore, the framework for the feed-in tariff is set, the details will be worked out. “Then, we need a regulation – a so-called Real Decreto – which specifies the details about the feed-in tariff,” says Polo. Hence, the solar thermal sector in Spain has to wait until 2012 to profit from the new support scheme.