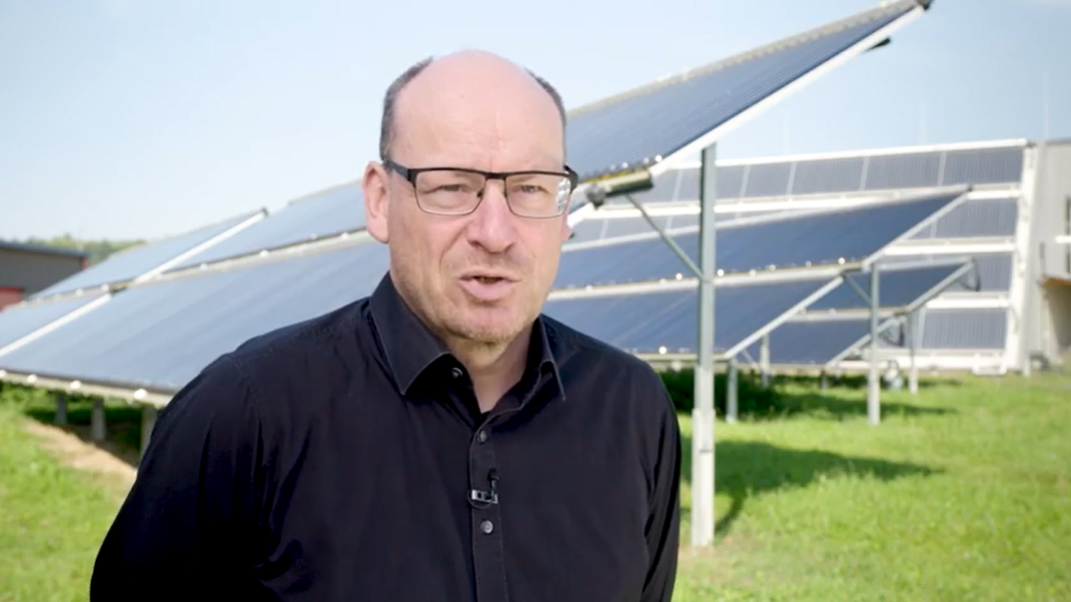 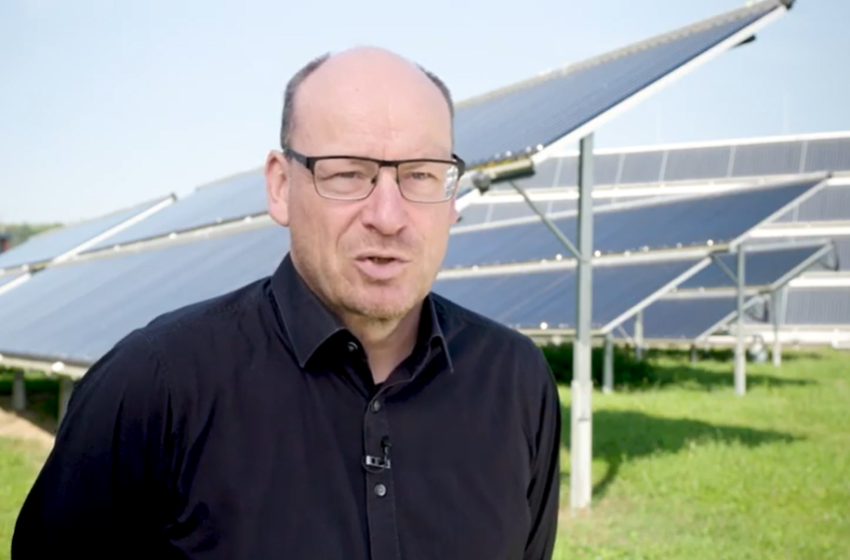 There is a lack of land available in Germany for solar district heating systems due to the complexity of the land-use plan procedure. Some local mayors who are active for climate protection have already given up on the idea of solar heating in their communities because the search for suitable land was too lengthy and difficult. Bene Müller, Co-Director for Sales and Marketing at Solarcomplex AG in southern Germany thinks that renewable district heating plants should be privileged according to paragraph 35 of the German Building Regulations, otherwise decarbonisation of the heating sector will not be possible. The 43-person team at Solarcomplex plans, realises and operates heating networks in the south of the state of Baden-Württemberg and sells the heat to local government customers as well as for business and residential buildings. Of the 18 heating networks, so far only three have an integrated collector field; two more are in the planning stage.
Photo: Solarcomplex
Mr Bühler of the company Ritter XL said in an interview: “The German solar local heating market could be larger if sufficient land area was available”. Do you agree with him?
Müller: Yes, certainly. But fundamentally, enough land exists, it is just not easily available. The land for large solar heat projects has to be found right next to built-up areas, but it is precisely in such locations that an extremely speculative mentality prevails. Agricultural land already competes with building land. In addition, solar district heating plants or infrastructure for regenerative heat generation in general are generally not privileged.
What would privileging mean and how could it be realised?
Müller: Paragraph 35 of the Building Regulations lists the types of project that can be privileged for planning and realisation on the edges of towns and communities. All building projects for the general supply of electricity are covered in these paragraphs. Wind power has also been included since 1997.
Here, federal policy makers are called upon to include general regenerative heat supply systems. For planners this would mean that planning permission is still required but no land-use plan procedure would be necessary before this. This hurdle certainly needs to be abolished.
What tasks are planners faced with in a land-use plan procedure?
Müller: The land-use plan procedure is very complex. It includes glare analysis reports, environmental aspects and the tedious assessment of alternatives. The latter is particularly obstructive because one can be happy to have found a suitable site at all. Having to prove that the site is better than others, even though these are purely fictitious, is an unnecessary hurdle.
If district heating systems are to become the norm, the authorisation procedures need to be simplified. Many people simply don’t want to deal with so much bureaucracy. The head of the public utility company in Radolfzell in Southern Germany, for example, after two highly complicated heating networks – on with a collector field – has given up and will probably no longer attempt any projects with solar district heating.
Have you also experienced these difficulties in finding suitable land areas for wind turbines or PV?
Müller: Yes, there are also difficulties there, but the situation is different because with photovoltaics and wind turbines there is more freedom in selecting the location. A solar collector field always has to be constructed near to the heating network in order to minimize the losses in the connecting pipework.
Despite these planning hurdles, Solarcomplex now operates 18 CO2-optimized heating networks in Germany. What is your recipe for success?
Müller: We now have many reference projects, so word has got around among mayors and local councillors. We often get a follow-up project from a nearby town when the heating network in the neighbouring community is in successful operation. However, the economic arguments are also important. We don’t make an extra charge for the building costs, which means that any heating customer can be connected to the heating network free of charge, and we offer competitive prices for the heat.
How do you achieve inexpensive heat prices despite the high initial investment costs?
Müller: Mostly we use waste heat from biogas plants, which we get for nothing from the farmers. The operators of the biogas plants receive a higher cogeneration bonus if the waste heat is utilised. In networks without any waste-heat potential we have constructed solar thermal plants, which also provide heat at a stable price of 2.5 EUR-ct/kWh, which is still very cheap. One should not forget that around half of the cost of the heat is dependent on the capital costs for the high investment in the new heating network. For each local heating network several million EUR are buried in the ground!
So what exactly is your business model?
Müller: We plan, build and operate a heating network in the streets of a community, with which we conclude a concession contract as a basis. Then we supply as many buildings as possible, including public once, with renewable heat. Nobody is obliged to connect to the system, we simply need to be economically attractive. Of course, we conclude heat supply contracts with as many customers as possible, before we start the construction work.
Solarcomplex has been an unlisted PLC since 2007. Are you aiming for a stock market listing?
Müller: No. The stock market is orientated towards short-term “success” – key phrase: quarterly reports – we concentrate on the longer term. We currently have 1.200 shareholders. In addition to many private individuals these are small and medium-sised companies such as local utility companies and energy cooperatives. We operate a share platform on which current offers from shareholders are presented. Interested purchasers can contact the seller directly.
The interview was conducted by Bärbel Epp.
More information:
http://www.solarcomplex.de