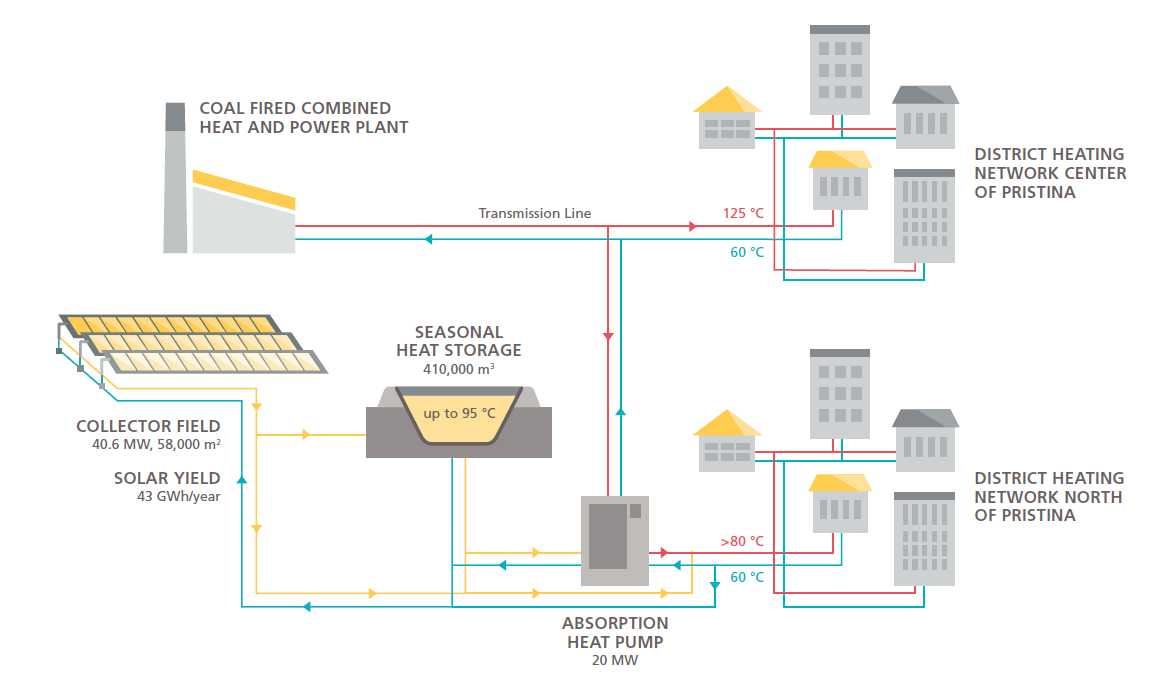 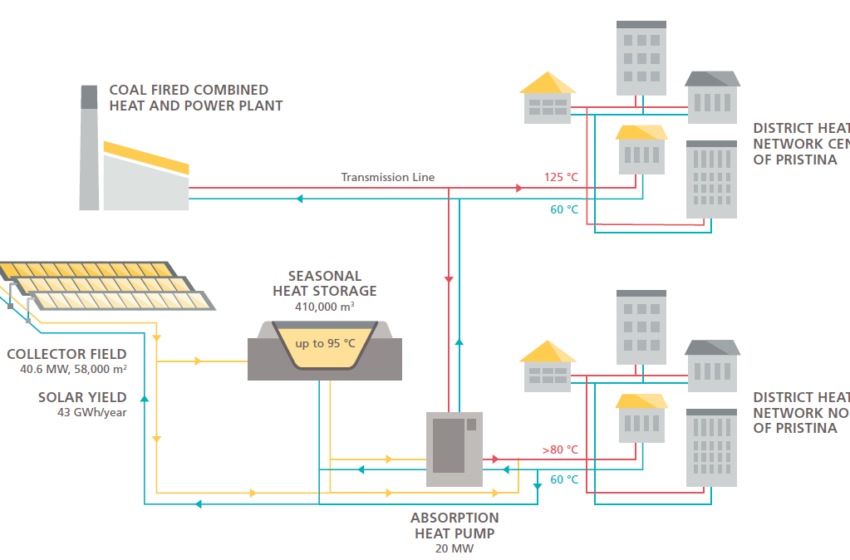 The way is clear for the construction of one of the largest solar district heating plants in Europe. The financing package for the EUR 80 million project was signed on 20 December in Pristina, Kosovo. The European Commission, the KfW banking group and the European Bank for Reconstruction and Development (EBRD) together with a local contribution will provide the investment costs for the multi-megawatt Big Solar Pristina plant. It is planned to include a 40.6 MW solar collector field together with a seasonal storage of 408,000 m3. This will significantly improve the air quality in the city. Currently, the district heating system is supplied with heat from a brown-coal-fired combined heat and power (CHP) plant. The CHP blocks also supply 94 % of the electricity used by the 1.87 million inhabitants of Kosovo.
Graphics: IEA SHC Task 68

The EUR 80 million will be spent on the collector field, the seasonal storage and the absorption heat pumps and also on enlarging the district heating network to reach around 38,000 residents. The 40.6 MW solar power plant is designed to cover a large proportion of the heat requirements in the extended heat network. Currently, around 75 % of the buildings in Pristina are not connected to the city’s district heating system and obtain heat by using the coal-based electricity in building-internal heating systems and by burning unsustainably sourced wood or lignite. Once the additional 38,000 residents have been connected to the heat network, their electricity demand will decline significantly. According to the press release of 20 December, the project will reduce greenhouse gas emissions by up to 47,000 tonnes of CO2 annually.

In a press release, Germany’s Deputy Ambassador to Kosovo, Matthias Conrad, is quoted as saying: “Germany has supported Kosovo in its transition from coal to sustainable energy and decarbonisation in accordance with the objectives of the Green Agenda for the Western Balkans”. The EUR 80 million CapEx is being financed by two grants from the German government through KfW and the European Union worth EUR 31.6 and EUR 21.5 million, respectively. The EBRD will cover EUR 23.2 million with a loan.

The KfW has also financed the feasibility study that is about to be completed. An experienced team of heat network experts from the iC group and Solid Solar Energy Systems – both from Austria – has put all their knowhow together to adapt the Big Solar concept to make it suitable for Pristina.

Adapting the Big Solar concept to suit the conditions in Pristina

“We have already supported Termokos, the utility company in Pristina, on its modernisation path since 2012”, said Felix Eckert. He is a district heating specialist at CES clean energy solutions – a partner of the iC group and initiator of the Big Solar Pristina project.

The term Big Solar was first used for a solar district heating project planned for the Austrian city of Graz back in 2016. The concept has been already applied in the Danish towns of Dronninglund, Gram and Vojens. It refers to solar district heating systems that store surplus solar energy from the summer in seasonal storage for heating purposes in winter. As the scheme above shows, the solar circuit starts at the bottom of the seasonal storage where you find the lowest temperatures and ends at the top of it. 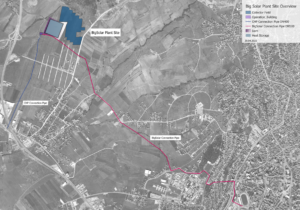 Scheme for the solar district heating plant, which will be connected via a 4.2 km pipeline (pink line) with the city of Pristina. A branch line of 1.6 km (purple line) will connect the seasonal storage with the CHP block. Graphic: CES clean energy solutions

One key component in the Big Solar concept is the absorption heat pumps. They perform two important functions. On the one hand, they heat up the water from the seasonal storage tank if it does not meet the demand of the supply line for the heating network.

On the other hand, the absorption heat pumps extract additional energy from the return flow of the heating network before it enters the storage tank. In this way, lower layers of the storage tank remain relatively cool. At the same time, the absorption heat pumps raise the temperature of the return flow to the required level to be re-fed into the network.

“With the Big Solar concept we can reach high solar shares in district heating grids with high temperatures”, summarised Christian Holter from Solid, regarding one of the advantages of the concept. The other advantage is that the seasonal storage offers the opportunity to integrate further alternative energy sources, for example heat from the CHP plant or power to heat.

According to the feasibility study simulations, the 40.6 MW (58,000 m2) collector field is expected to produce 43 GWh per year. That is 741 kWh per square metre.

Solar heat plant to operate for 25 to 30 years

“What is special here is that the absorption heat pumps draw their drive heat from the transport line between the power plant and the district heating system. This is technically much more demanding than if there were a peak load boiler supplying the heat to the heat pumps,” said Eckert.

According to a project description drafted by Termokos, the design and planning phase will start in 2023, followed by the tendering and construction phase. The utility company expects the commissioning of the SDH plant by the end of 2027. The primary operation period of the facility is calculated as 25 to 30 years.