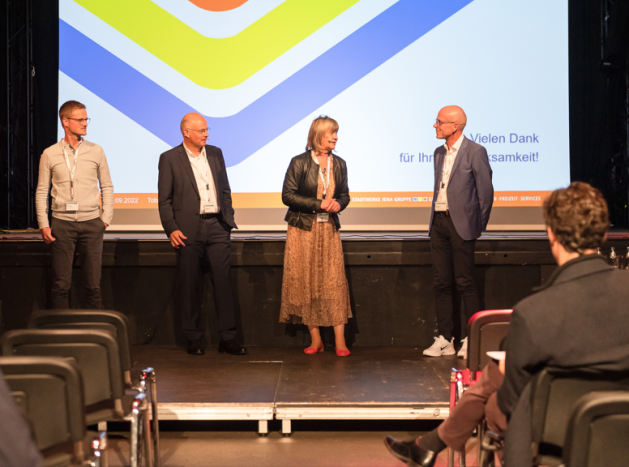 Even now, when everybody is talking about heat costs and gas security, solar thermal has a hard time in Germany competing against PV and heat pump combinations. To bring solar thermal back onto the agenda, the annual conference Forum Neue Energiewelt offered a special session on smart and intelligent operation of district heating (see photo). Under the moderation of Karin Rühling, Head of the Department of Heat Supply at Dresden University of Technology, Christian Stadler from Viessmann (on the right) presented encouraging monitoring results from new solar district heating plants and Markus Euring from Enerpipe (first on the left) described the company’s smart solutions for the optimisation of renewable energy district heating systems.
Photo: Conexio PSE

Stadler, Head of the Large-Scale Solar Thermal Projects department at Viessmann, described the combination of district heating and solar thermal as a dream team. He emphasised that solar thermal energy delivers three to four times the energy yield per area than photovoltaics, and even 50 times more compared to biomass. However, finding the best system is not a question of either one or the other technology, but of intelligent interaction between them.

Stadler illustrated his point using the new solar district heating plant in the small German town of Lemgo as an example. The municipal utility company of Lemgo combined the 5.2 MWth collector field with two gas-driven combined heat and power plants (CHP) and a heat pump that uses water from a river as a heat source. The solar thermal plant has been in operation since March 2022 and achieved the predicted annual yield of 3.3 million kWh already in September this year according to Stadler. With 9,181 m2 of gross collector area, it is the third-largest in Germany after Greifswald and Ludwigsburg (see following table).

Key figures for the three largest SDH plants to date * Yield in the first year of operation. Ludwigsburg was realised by the German office of the former Danish company Arcon Sunmark Sources: Ritter / Stadtwerke Ludwigsburg-Kornwestheim / Viessmann 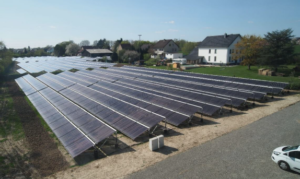 Subsidies for “innovative co-generation”, not for solar thermal

In Lemgo the two CHP units produce electricity and heat primarily in winter. The advantage: when the heat load is so high that the CHP units have to run, they can also provide electricity for the heat pump. As in Greifswald, in Lemgo there was no direct subsidy for the solar thermal plant. Instead, the contribution of more than 30 % renewable heat from the heat pump and solar thermal makes the plant an “innovative co-generation plant” (iKWK), so it is entitled to a higher price for the electricity produced in the co-generation unit. Since September 15, Germany has a new subsidy programme for large-scale solar thermal – the long-awaited federal subsidy for efficient heating networks (BEW).

Find space for solar fields even on urban roofs

In cities, space is often scarce. In order to open up new areas even on rooftops, Viessmann is using a new collector system consisting of vacuum tube collectors that can be installed on flat roofs, parallel to the roof. The weight is below 30 kg per square metre. “This puts us on a similar scale to lightweight photovoltaic systems and even allows us to use lightweight buildings if they are located alongside the district heating pipeline,” said Stadler.

Similar to the electricity grid for photovoltaics, the heat grid thus becomes an “infinite consumer” for solar thermal energy, leaving no kilowatt hour unused even in summer. “This is the best conceivable business case,” said Stadler. He emphasised, however, that roof areas need to be above 500 m2, since the costs for monitoring and backup pumps must also be amortised. According to Rühling, in low-temperature grids roof areas of 200 m2 can also be interesting, but below that “you hit the smallest size of feed-in stations”.

The German company Enerpipe opts for maximum district heating efficiency by monitoring the volume flow in every pipe and of every consumer. The company and its portfolio were presented by Markus Euring during Karin Rühling’s heat session.

Enerpipe not only looks at resources and consumers in each network area, but also simulates how they can best be brought together over the course of the day and the year. According to Euring, this is particularly important for grids with low heat density – i.e., in new construction areas or rural areas – because otherwise losses increase disproportionately compared to useful heat.

Another smart solution is so-called pulse operation. In this case the pump does not constantly circulate large quantities of water through the whole network, but only when heat is required – i.e. when one of the decentralised buffer tanks cools down. When this is the case, neighbouring buffer storage tanks which still have free capacity will also be heated up. Pulse operation can also be used to transport “surplus” solar heat during the day to the decentral tanks, where it will be needed in the morning.

Another parameter that Enerpipe’s control software keeps an eye on is the volume demand per amount of energy at the individual consumers. It indicates how well the transfer stations manage to extract heat from the heat transfer medium that passes through. “As a parameter for efficient operation, this is more suitable than the pure temperature spread, since the latter only represents a snapshot,” said Euring. The volume demand per amount of energy varies easily by a factor of 3 between individual consumers. Knowing where the heat transfer has a poor efficiency enables network operators to examine these points and make them more efficient.

Controlling and monitoring the heating network in such detail requires measurement and communication technology. In new networks, fibre-optic cables are therefore often laid together with the heat lines. In existing networks, communication can be retrofitted via radio solutions. “More and more network operators are opting for this, because it saves them money,” says Euring. Depending on the size of the network and the programming required  (e.g. for complex heat production with different heat sources) the costs for software and hardware will vary.

The bottom line, according to Euring, is that an intelligently monitored and controlled network can be installed or retrofitted in most cases for less than EUR 1,000 per connected building. This includes software and hardware in the control centre as well as measurement and communication technology. The latter can be fibre optics, copper cables or wireless technology, depending on the circumstances.

“With such equipment, automated remote readout is then also possible. In the future, network operators will have to do this anyway in order to provide their customers with their consumption values on a monthly basis,” said Euring.