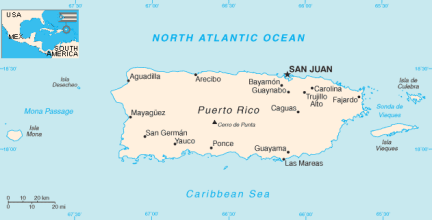 The Senate of Puerto Rico has passed a bill that will allow low-income families to replace conventional water heaters with solar thermal ones. The programme will cover all equipment and installation costs, although the size of the available funds and the target groups has not been defined yet. The law is on its way to the House of Representatives and will give priority to locally manufactured collectors. Puerto Rico is a US territory with commonwealth status and 3.7 million inhabitants. It is located in the eastern part of the Caribbean.
Source: Wikipedia Comments
3 April 2014 was a historic day for solar thermal technology in the island territory of Puerto Rico. Senate Bill 987 approved the Programa Especial de Reducción Energética Residencial en los Hogares Puertorriqueños (roughly translated as Special Program for Residential Energy Reduction). According to the draft of the bill the programme will cover the costs, replacement and installation of solar water heaters making use of the so-called Green Energy Fund created in 2010. Since 2011, the fund has been collecting money from taxes on imported cars and motorbikes in order to promote green technologies and renewable energy sources. It is managed by the Puerto Rico Electric Power Authority, AAE.
The overall fund budget for fiscal year 2013/2014 was USD 25 million, which is expected to increase to USD 30 million during the next one. It, however, has not been determined yet which share of the Green Energy Fund will be allocated to solar thermal water heaters in fiscal year 2013/2014 and whether a separate budget will be announced for fiscal year 2014/2015.
Reducing electricity bills by up to 30 %
Although the new programme has still to be approved by the House of Representatives, the main rules have already been laid down. According to Senate Bill 987 (see the attached PDF), the government will select the final beneficiaries through the AAE, giving priority to lower-middle-class families, single mothers, people with disabilities and senior citizens. However, the exact requirements will have to be specified in a separate guideline. The draft of the bill also requires that a solar water heater “should not be removed from the property where it is located, unless the beneficiary can show it is moving for a necessary reason.” In other words, the user can enjoy the daily benefits of the solar system without having to have title to the entire property. According to the draft law, the installed heaters could reduce the beneficiaries’ electricity bill by up to 30 %.
Preferring locally produced solar water heaters
One singularity of the bill is that it will establish a sort of protectionist clause for the local industry. The programme prefers to subsidise locally produced products unless “the prices of local manufacturers are competitive with foreign ones.” In case locally produced systems are more expensive than imported ones, the authorities will open the subsidy scheme to imports.
According to the bill’s text, there are around 200,000 households in Puerto Rico which have already heated their water using the sun. Annual market volume is around 2,000 new solar heaters, mainly for residential purposes. But there are still one million families without access to this technology on the island. Considering the island’s 70 % dependency on fossil fuels (mainly oil derivatives) for electricity generation and end consumer electricity prices in the range of 0.27 USD/kWh, the new law may well contribute to reducing Puerto Rico’s energy dependency while increasing the market share for solar thermal technologies.
More information:
http://www.aae.gobierno.pr
http://www.prgef.com
https://solarthermalworld.org/wp-content/uploads/2014/04/energy_law_puerto_rico_3_april_2014.pdf