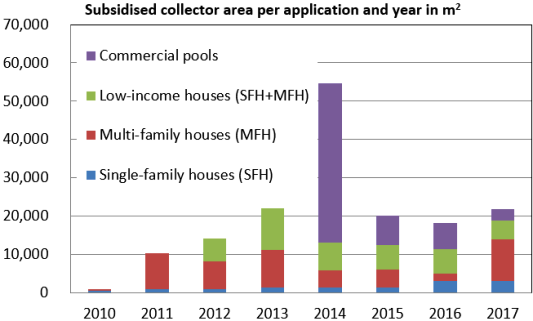 In 2017, the California Solar Initiative (CSI) – Thermal Program supported the installation of 20,000 m² of collector area, a 20 % increase over the prior year. With 10,832 m², or four times the area installed in 2016, multi-family buildings dominated the subsidy landscape for those 12 months. The surge was a result of a temporary increase in the incentive amount, from USD 29.85 per therm displaced to USD 70, granted across the service area of Southern California Gas Company. The chart, for which data has been supplied by the California Public Utilities Commission, shows the collector area subsidised and installed from 2010 to 2017.
Source: California Public Utilities Commission
Sales of commercial pool heating systems declined for another year. The market had its peak in 2014, after nearly a year had passed before incentive levels and requirements were set, while applications had piled up and needed to be processed.
In February 2013, installations providing solar heat for industrial processes, or SHIP, became eligible for CSI, but because of low gas prices, no application for this sort of system has been submitted to date. SHIP was still a relatively new application across the United States, said William Guiney, President of Artic Solar, a Florida-based project developer specialising in solar process heat. In 2017, his company had installed just one 16.2 m² system for heating fish barns in the state, he said.
Last May, CSI – Solar Thermal was extended for 2.5 years to support the replacement of gas water heaters by solar systems. It will make cash rebates available until 31 July 2020, although a cost-effectiveness analysis of the programme will need to be completed by 31 December 2019.
In addition to Florida and Hawaii, California is the third key state for solar thermal sales in the United States. With 174,396 m², the national glazed collector market had remained stable in 2017, said Les Nelson, Director of Solar Heating & Cooling Programs at the California-based International Association of Plumbing and Mechanical Officials. In all, most of added solar thermal capacity in 2017 can be traced back to unglazed collector installations for swimming pool heating, for which the United States was again the largest market, with new systems adding up to 766,210 m² (536 MWth).
rganisations mentioned in this article:
http://www.csithermalstats.org
http://www.cpuc.ca.gov
http://www.iapmo.org
http://www.articsolar.com