There is now nothing in the way of constructing an impressive solar heating and cooling installation in Nicaragua. At the end of September, the last signatures were placed under the contract documents for a 4,450 m² collector field which will supply air conditioning and warm water to the Hospital Militar Escuela Dr. Alejandro Dávila Bolaños in Managua (see photo), the capital city of the central American nation. “Installation work will start in January 2017, and commissioning is planned for the second quarter of next year,” was how Christian Holter, Managing Director of S.O.L.I.D, outlined the ambitious plan. The Austrian turnkey system supplier had been struggling for over three years to receive financing for the 4 million EUR project in form of a soft loan, a financing instrument for developing countries.
Photo: Hospital Militar Escuela Dr. Alejandro Dávila Bolaños
The beneficiary is the largest hospital of Nicaragua, a 400-bed complex which was inaugurated in June 2015. According to a June 2015 news article from http://www.elnuevodiario.com.ni/, the project will cost USD 125 million, including land development, construction, equipment supply and the training of around 2,200 employees.
Hot water will be provided by means of liquefied gas, and the cooling load will be covered by electricity-driven compression chillers. “We designed the solar thermal system to cover almost 100 % of the hot water demand in order to save on liquefied gas, which is expensive. Air conditioning will consume 30 to 40 % of the solar energy,” Holter explained. The only thing not substituted by solar is the steam required by the hospital. The field of large-scale collectors from Austrian Greenonetec will be installed on the roof of the hospital buildings. The third cooperation partner is German Caverion, which will provide the pipework. 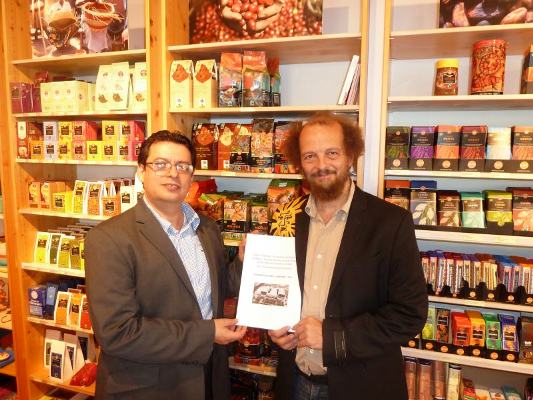 The photo shows César Barahona (left), Director of the National Cleaner Production Centre of Nicaragua and UNIDO’s technical advisor on Latin America and the Caribbean, and Christian Holter, Managing Director of S.O.L.I.D, an Austrian supplier of turnkey solar thermal systems, presenting one of the around 30 contracts signed during the three-year planning phase while they met in the One World Shop in Graz, Austria, in July 2016.
Photo: S.O.L.I.D.
The lighthouse project was initiated by the United Nations Industrial Development Organization (UNIDO) and the National Cleaner Production Centre of Nicaragua (NCPC). The starting point was March 2013, when the financing for the planned hospital had already been available. The soft loan required a bilateral contract between Austria and Nicaragua. “Our project was debated twice in the Nicaraguan parliament, and we needed two signatures by the country´s president, which was quite the bureaucratic hurdle,” Holter said about the three-year planning phase.
The soft loan conditions on repayment are profitable for all partners involved. The government of Nicaragua will have a five-year interest-free period and a low-interest one for the subsequent 12.5 years to pay off the total amount. S.O.L.I.D. bears no financial risk in supplying the turnkey installation, since the entire investment is paid after the project is complete and the total sum is guaranteed by Austria’s main provider of financial and information services, the OeKB. According to a S.O.L.I.D. press release from July 2016, the Nicaraguan system is the first large-scale solar plant to be financed by a soft loan from Austria. This financing measure could very well be implemented in other developing countries in the future and may contribute to national sustainability goals.
Websites of companies and institutions mentioned in this article:
www.solid.at
http://www.greenonetec.com/
http://www.caverion.de/
http://www.unido.org/ncpc.html
News
Domestic Hot Water and Heating
Solar Cooling
Finance and Incentives
Nicaragua
Austria
Germany
hospitals
S.O.L.I.D.
Hospital Militar Escuela Dr. Alejandro Dávila Bolaños
Greenonetec
Caverion
UNIDO
NCPC
OeKB