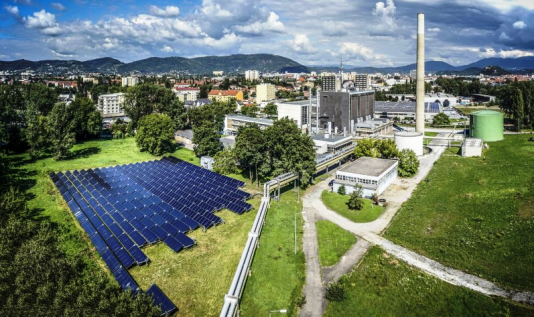 During the last seven years, a group of scientists has monitored selected large solar thermal installations in Austria on behalf of the Austrian Climate and Energy Fund. The gathered data confirms that these plants have been reliable and produce satisfactory yields. Particularly the new generation of large-scale medium-temperature collectors either with a foil or with a second glass cover shows remarkable results in district heating use. The 2,490 m² solar field (see photo) which has fed heat into the district heating network of Graz, Austria, reached a yield of 489 kWh/m².
Photo: Picfly.at Thomas Eberhard
At the same time the Climate and Energy Fund launched an incentive scheme for large solar plants in 2010, a monitoring programme started. The research group led by Austrian institute AEE INTEC chose 82 large solar plants for one-year monitoring. These plants were selected for either their innovative technologies or their suitability as industry showcases. The one-year programme has already ended for 37 of the systems. “Most of the plants operated reliably during that period,” said Christian Fink, Head of Thermal Energy Technologies and Hybrid Systems department of AEE INTEC. The average specific yield was 368 kWh/m² (aperture area). “This is satisfactory. Most of the time, the measured yield also matches the planning phase figure,” added Fink.
One of the monitored plants was the 2,490 m² collector test field in Graz. It has even surpassed previous estimations by achieving a specific yield of 489 kWh/m² during monitoring. “Considering the high temperature in the district heating network, the outcome is remarkable,” said Fink. The network’s feed-line temperatures range between 80 to 120 °C and its return temperatures between 58 and 70 °C. The test field covers only 0.1 % of the annual total heat demand of the network users, which is why energy from the collector field is fed directly into the network without intermittent storage.
The Graz field was the brainchild of Austrian turnkey system supplier S.O.L.I.D. “We wanted to investigate the performance of the new generation of large flat plate collectors in an in-situ test, which has all collector fields operate under comparable conditions,” explained Christian Holter, Managing Director of S.O.L.I.D. “The monitoring results from AEE INTEC prove that the performance of the test field has been absolutely satisfactory, even at the high temperatures of the district heating network.”
The field consists of double-glazed collectors from five different European manufacturers. The three types with foil between glass cover and metal absorber were manufactured by Danish-based Arcon-Sunmark, German-based KBB and Ökotech Solarkollektoren from Austria. Three other subfields are made up of flat plate collectors with a double-glass cover and were produced by Austrian businesses Greenonetec and Ökotech as well as Finnish-based Savo-Solar.
So far, there are no long-term measurements of the performance of the subfields in Graz available. Analysis of single sunny days showed, however, yield deviations of up to 17 %, as AEE INTEC mentions in the final report about the monitoring programme (see attached document). Output seems to differ significantly from one flat plate collector model to the next, which will require further analysis. An Austrian research project called MeQuSo – Development of methods for quality assessment of large solar thermal plants under real operating conditions will evaluate the field performance in great detail with an in-situ collector area test procedure that will be developed within the project. First results are expected to be available in the second half of 2017.
Websites of organisations mentioned in this article:
http://www.aee-intec.at/index.php?lang=en
http://www.solid.at/en/
https://solarthermalworld.org/wp-content/uploads/2017/03/solare_grossanlagen_2010-2015_aggregierter_bericht.pdf