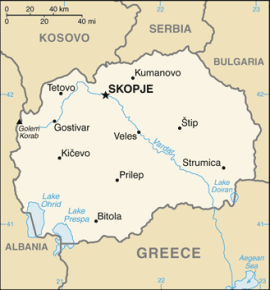 In Macedonia, a solar system has just been installed on the roof of a primary school. The system, which will provide power for lighting and the school computers, is at least a small step towards establishing solar energy in the country – but unfortunately, only in the direction of electricity production. In terms of heating and cooling, there is not much to present in the former Yugoslavian country in the southeast of Europe, although climatic conditions are great. Solarthermalworld.org talked to Sanja Popovska-Vasilevska, Vice President of the solar association Solar Macedonia, about the situation of solar thermal in her country.
Source: Wikimedia Commons

“The solar thermal market in Macedonia is not a very prosperous one: Electricity is more important here and better supported,” says Popovska-Vasilevska. Macedonia’s electricity consumption is enormous when seen in relation to its gross domestic product. A large share of the electricity is needed to heat private homes – which means, technically, a lot of it could easily be replaced by solar heating. However, electricity is cheap in Macedonia: 70 % of the country’s electricity comes from power plants fired with domestic lignite (brown coal). Now, as lignite resources are dwindling and carbon emissions take the spotlight, some efforts are made to use alternative energies, although they do not seem very convincing.

Macedonia has an annual solar irradiation of 1,250 to 1,530 kWh/m2, which means a huge potential for solar energy applications. But so far, only a few solar water heaters have been installed. In 2006, solar thermal contributed about 7.4 GWh (or 0.04 %) to final energy consumption. According to Solar Macedonia, there are about 16,000 m2 of flat plate collectors installed in the country, which translates into 8 m2 per 1,000 inhabitants.

The annual growth rate of the local collector market has been about 10-15 % before 2009. Popovska-Vasilevska estimates the current rate to be lower because of the economic crisis, but precise data has not been available.

Confusing information and uncertain political conditions are among the main difficulties with which the Macedonian solar industry has to grapple. Solar customers do get some governmental encouragement to use solar water heating systems: There is a tax reduction on the VAT rate, which is 5 % for solar components instead of 18 %. “But there is no clear definition of what exactly constitutes a solar component,” Popovska-Vsilevska says. Strictly interpreted, the reduction only applies to the solar collector, leaving around 80 % of the system costs subject to a full VAT rate. In addition to the tax rebate, private solar customers can get a 30 % incentive from the government. Annually budgets of EUR 150,000 of incentives were dedicated to solar water heaters in 2007 and 2008. Assuming each system was supported with the maximum tariff of EUR 300, it means that around 500 water heaters received government incentives – not very much to keep a market going.

Nobody knows if and how long the programme will continue. This uncertainty makes Popovska-Vasilevska even worry that the negative might outweigh the positive effects. Besides the stop-and-go effect caused by interrupted support programmes (well-known from Germany), short-term programmes would attract phantom companies, which make quick money by selling low-quality solar systems, and set off an avalanche of negative publicity for solar.

The threat of negative publicity is the reason why Popovska-Vasilevska considers quality assurance at least as important as financial support. Since Solar Macedonia was founded in 2006, the improvement of quality standards has been a main concern of the association. For example, a collector testing unit has been installed at the Hydrometeorological Institute in the city of Skopje, with the help of the Austrian Development Agency (ADA). Its aim was to test and improve collectors ‘made in Macedonia’. “Sad to say, already in the third year, the test station is not working due to lack of professionalism, interest and skills,” Popovska-Vasilevska writes in a report about solar energy.

So, is there any hope for solar thermal in Macedonia? There are actually some factors that might help. One thing is that lignite is becoming more expensive, which might result in higher electricity prices. Another glimmer of hope is Macedonia’s ambition to become a member of the EU. This would require a minimum of environmental and renewable energy policies.

To really bring solar forward, Popovska-Vasilevska believes it would need a long-term programme which does not only include financial support, but also monitoring the results.“What should be monitored are not only the installed collector area, but also the growth of the solar market in Macedonia, the newly inaugurated installations and the achieved level of application, and consumer satisfaction,” says Popovska-Vasilevska.