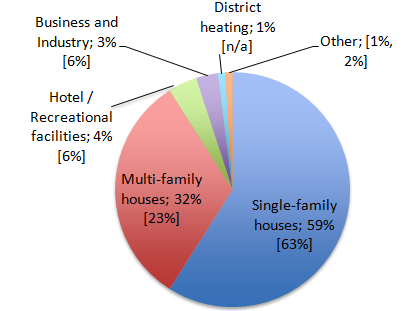 The market report Innovative Energy Technologies in Austria. Market Development 2014 published by the Austrian Federal Ministry for Transport, Innovation and Technology (bmvit) shows that in 2014, the national solar thermal industry had to deal with declining sales for the fifth time in a row. The solar thermal market in Austria dropped by 15 % from 2013 to 2014, resulting in a total annual volume of 108.6 MWth (155,170 m²) last year. The pie chart shows the share of different segments in the collector area newly installed in 2014 [2013]. Multi-family buildings have significantly increased in importance. According to recent data by the industry association Austria Solar on the first two quarters of 2015, the decline seems to be slowing down, partly because of a new federal incentive programme.
Source: Market development report 2014

According to the market report, flat plate collectors account for 97 % of Austria’s market volume. The total production volume of solar collectors was 556.5 MWth (795,056 m²), which is half of the production volume in 2009. With an 82 % share, export was still the main driver of the solar thermal industry. But deliveries to the main export markets (Germany, Italy, Spain, and Portugal) shrank, which means total export figures fell by 18 % versus 2013. Greenonetec (not named in the report, but well-known) was responsible for 74 % of the country’s flat plate collector production, whereas the number two on the market produced 7 %. The solar thermal sector generated a turnover of EUR 255 million, of which EUR 134 million was made with solar thermal plants installed domestically (including system assembly and installation) and EUR 121 million with exports.
Despite the market decline, the round about 500 m² per 1,000 inhabitants is still leading in Europe in terms of total solar thermal collector area installed per capita. Regarding new installations per head, Austria had far surpassed any other country in Europe until 2012. In 2013, Greece caught up and took the lead in 2014, being one of the only countries in Europe which experienced a growing number of solar thermal installations.
Best federal incentive for residential solar heat – ever
During the summer of 2015, the situation seems to have improved a bit. “The first quarter of 2015 was terrible for solar thermal, the second quarter was significantly better,” says Klaus Mischensky, Managing Director of Austria Solar. Both quarters combined again showed a decline of 15 % compared to the same period last year. A national incentive scheme for solar thermal energy and industry efforts have slowed down market decline and Mischensky hopes for a one-digit decline this year in total. “Compared to PV and pellet boilers, solar thermal is actually getting off lightly,” is how Mischensky puts it. “But there is no push that would stop the decline or turn it into growth.”
In Austria, incentives for solar thermal are often part of the housing subsidies, which are the responsibility of the nine federal states and vary widely from state to state. Still, it is the second time now that there exists a federal incentive. From 24 February 2015 to 30 November 2015, Austrian consumers can apply for grants directly at the Austrian Climate and Energy Fund. The government calls it a “mass incentive programme”. Conditions have significantly improved compared to the last federal incentive scheme back in 2012. Instead of EUR 350 for any kind of system, the current programme offers EUR 750 for solar water heaters (with at least 5 m² of collector area) and EUR 1,500 for solar heating systems. The programme budget is EUR 9.1 million, which would be enough money for more than 6,000 solar heating plants or more than 12,000 hot water systems. Based on hot water systems of 5 m², the budget would equal 60,000 m² of solar collectors. There has not yet been any data on the current number of applications, but the programme has so far not run out of cash.
The federal incentive can be combined with federal state and community incentives if the state allows it. “Some federal states allow the combination of incentives; others do not. There are even cases where the state law can be interpreted in both ways, so solar customers can’t be sure on which incentives they can count,” says Mischensky. For example, despite an EU and federal law threshold of 60 % cost coverage for private investments, the state of Kärnten limits solar thermal incentives to 40 % of the investment costs. State law says that federal grants will be “taken into account” – leaving open whether they will be subtracted from state grants or can be added to the 40 %.
The market report on innovative energy technologies is published every year by bmvit. The chapter on solar thermal energy was written by Werner Weiss and Manuela Eberl from Austrian research institute AEE INTEC. The Austrian solar heating and cooling market has been well documented since 1975. Information is collected from manufacturers (manufacturing data) and distributors (sales data) in Austria, as well as from funding agencies of the federal states and Kommunalkredit Public Consulting as an administrator of incentives.
More information:
Federal Incentive by Climate and Energy Fund: http://www.klimafonds.gv.at/foerderungen/aktuelle-foerderungen/2015/solaranlagen/
Austria Solar: http://www.solarwaerme.at
https://solarthermalworld.org/wp-content/uploads/2015/10/austria_market_development_report_2014.pdf