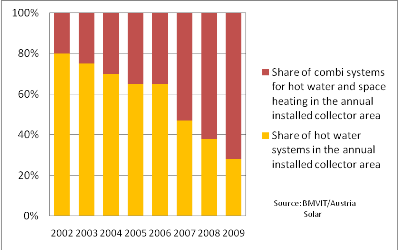 Austrian flat plate collector manufacturers may smile again: Last year’s decline seems to have been overcome. A quarterly anonymous survey carried out by an Austrian accounting company among 25 members of the solar thermal industry association Austria Solar (representing 75 % of the total market volume) showed an increase in sales of 22 % in the first quarter of 2011, compared to the previous weak year. The annual market statistics carried out by the Federal Ministry for Transport, Innovation and Technology (BMVIT) also show several other interesting trends, such as the one towards combi systems (see figure).
Figure: BMVIT/Austria Solar

“Austria can be considered the most mature market in Europe,” the European Solar Thermal Industry Federation (ESTIF) wrote in its annual market statistics of 2010. It has always been seen as a showcase for the development of other Central European countries. Therefore, it is interesting to study the long-term transition processes on the market, whose annual BMVIT statistics can be used to catch some of the market’s trends: