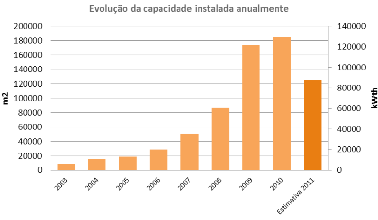 Apisolar, the Portuguese national solar association, expects a 30% decrease in newly installed collector area this year. The forecast until the end of 2011 is 127,000 m2 (89 MW), whereas around 180,000 m2 of collector area were newly installed in 2010. This year’s low demand has partly been a result of the changes in the national support policy. And, some more major changes in the country’s fiscal policy are coming into effect at the beginning of 2012 – which means the downward trend is not likely to be stopped next year, too.
Source: Apisolar

In 2010, those who installed a solar thermal system (or another type of renewable energy) still got a tax reduction of 30% of the system’s costs, capped at EUR 803. At the beginning of 2011, the incentive became a “fiscal benefit”, which meant: smaller limits, smaller benefits for applicants.

The situation is looking even worse next year. As of early 2012, investing in a solar thermal system in Portugal will become a less likely choice to make, because the Portuguese government has decided to raise the VAT rate on renewable energies to the maximum of 23% – until now, the rate had been 13%.

The decision is included in the official State’s Budget for 2012 report, which has recently been approved by the Portuguese Parliament. The document also declares an end to all fiscal benefits for solar water heaters by the beginning of 2012.

The solar industry had already been expecting an increase in VAT, but there was still a little hope left that the government wouldn’t go forward with it. According to Apisolar, it means a “real increase in prices for the end costumer” and “put maintenance demand at risk”. Together with the difficulty of obtaining credit and weak purchasing power resulting from austerity measures (especially for the middle class, the one most likely to invest in a solar thermal system), the additional 10% on the system price will mean dwindling investments in the solar sector, both thermal and photovoltaic. For the Portuguese Association of Renewable Energy, APREN, it is a “sad situation”, because it will affect residential users of solar systems, although the association adds that “because of the country’s economic situation”, it is a decision that must be accepted.

Ultimately, Robin Welling, President of the European Solar Thermal Industry Federation (ESTIF), expects the Portuguese solar thermal market to suffer a “strong double digit decrease” in 2012, while APISOLAR warns that, “the decline in 2012 can reach the level of 2008” (86,820 m2) by changing the VAT rate and the rules of the incentive schemes.