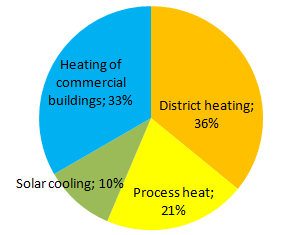 Austria´s solar thermal market has come to depend a great deal on incentive programmes. The schemes in 2012, however, met with varying degrees of success. Demand was again great for the subsidy programme for large-scale solar thermal plants  administered by the Austrian Climate and Energy Fund. The chart shows the share of the different applications among the 39 projects approved in 2012, the third consecutive year in which the programme was running. On the other hand, demand for the first federal residential grant programme, which supported the purchase of solar thermal systems of 5 m² of collector area or more with EUR 400, was not satisfying. Only one-third of the EUR 5 million budget was spent last year.
Source: Austria Climate and Energy Fund

Still, the residential subsidy scheme may have helped a little to slow down the market decline. According to first estimations by the solar thermal industry association Austria Solar, the newly installed collector area declined by 10 % in 2012 (2011: -18 % and 2010: -21%). “Several plumbers have assured us that EUR 400 was too small to stimulate any investment,” Roger Hackstock, Chairman of Austria Solar, confirms. It also did not help that the federal government paid out the 400 EUR grant in addition to any subsidies granted by the state governments. The Austrian Climate and Energy Fund approved 3,835 applications with a total collector area of 46,658 m² (status report 18 January 2013). According to the programme administrator at the Fund, Stefan Reininger, it is rather likely that the programme will continue in 2013. The new regulations may be published by spring 2013.

The same goes for the large-scale solar thermal incentive programme by the Austrian Climate and Energy Fund. According to Austria Solar, it is also likely that the programme will continue, but nothing has been approved yet. Applicants have submitted 45 projects in 2012, of which 39 were approved and 15 are being monitored. The table below shows that district heating is the most popular application among the programme’s allowed technologies with 14 projects approved in 2012. Solar cooling has the smallest share with only 4 installations. The eight process heat projects add up to the highest collector area of 4,500 m², which corresponds to an average 563 m² per project.

Since the beginning of 2012, the third countrywide subsidy scheme for the energy-efficient renovation of existing housing also includes a EUR 1,500 grant for solar thermal systems. Only 600 among the 12,000 applications in 2012 came from private house owners who installed a solar thermal system. In the previous year, 17,500 owners retrofitted their houses and flats. There was no particular solar thermal grant back in 2011. This efficiency check subsidy will run until 2015 and the level of grant per solar thermal system increased from EUR 1,500 to EUR 2,000 since 14 January 2012.

And how does the Austrian industry expect the market to develop this year? According to a survey carried out by German agency solrico in October 2012, the sector players are rather pessimistic. Ten Austrian collector and tank manufacturers stated their individual expectations for 2013, of which seven assume a market development “as bad as in 2012” and only three forecast a slight increase. The range of the forecasts is +/- 5 % for 2013 compared to 2012, in which 207,171 m² were newly installed, 10 % less than in 2011.