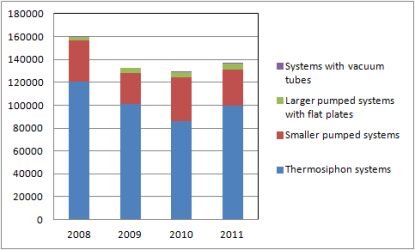 The solar thermal market in Japan has not profited significantly from the energy crisis after Fukushima in March 2011. The latest statistics of the Japanese Solar System Development Association (SSDA) show that the number of newly installed collector area in 2011 was only slightly higher than in 2010. In fact, the 2011 market volume of 136,600 m² was merely 5 % above the previous year (129,839 m²). The chart depicts the SSDA market statistics for the last four years, including the share of each solar thermal technology.
Source: SSDA

Japan is still a market dominated by thermosiphon systems. They made up 73 % of total market volume in 2011. The Solar System Development Association (SSDA) does not differentiate between flat plate and vacuum tube collectors in this segment.

The share of residential pumped systems, on the other hand, differs from year to year, with no clear upward trend. The systems have gained no acceptance on the market because of their higher price. Usually, the SSDA does not show thermosiphon systems based on collector area, but on units. Over the last years, however, the association has always stated the average collector area to add up to 3.2 m²/unit, so this conversion factor is also used in the chart above. Vacuum tube collectors have not had a substantial influence on the Japanese market yet. Only between 500 and 700 m² have been incorporated into smaller pumped or larger solar heating systems over the last years.

The solar thermal market has been more or less stagnant during the last three years. Little support by the government, still relatively high prices and the financial crisis which hit Japan in the second half of 2009 are said to be impeding any further growth. Only 2008 showed a slightly higher sales volume of 160,000 m², caused by the rapidly increasing oil price in the first half of 2008 and the start of the Tokyo Metropolitan Government’s solar thermal promotion campaign.

This year’s outlook does not seem much better, according to a statement by Eijiro Kawai, Sales Manager at Chiryu Heater Co., one of the oldest collector manufacturers in Japan. “We expected the solar thermal market to spike after Fukushima, because people started to have a close look at sustainable energies. But it turned out to be a push for solar power generation, caused by the feed-in tariff.” Kawai expects this year’s market to stay as it is – stagnant.