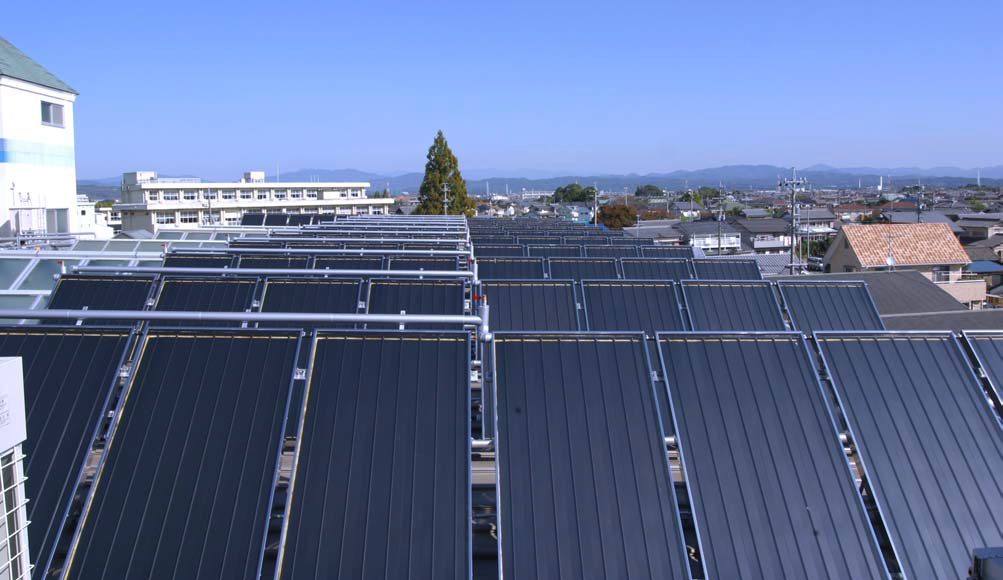 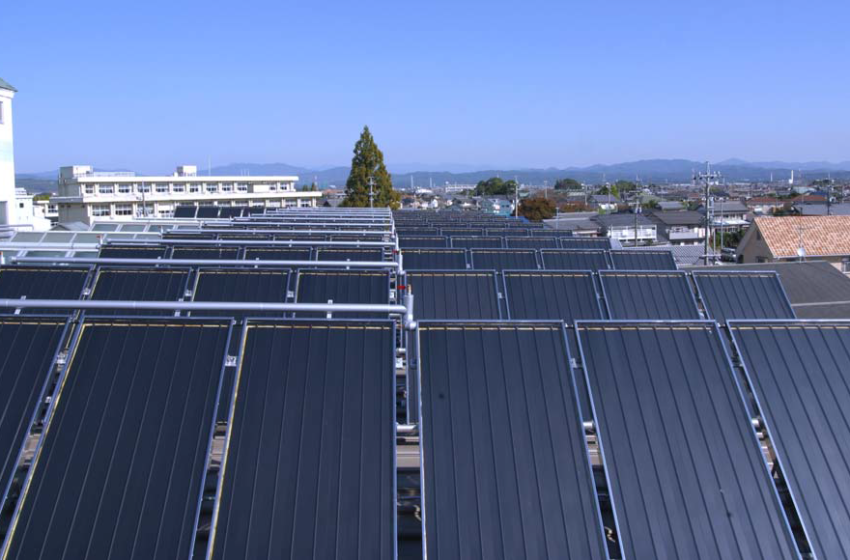 Taiwan and Japan have more in common as it seems at first glance: Both countries do not only belong to the same world region, but their 2014 market volume was of the same size too – around 100,000 m2 of newly installed collector area. And last but not least, vacuum tubes play only a minor role in both countries. Another factor which Taiwan and Japan have in common: they are hardly in the focus of the global solar thermal industry. One difference, however, is that Taiwan benefits from a support structure, whereas the Japanese industry is on its own – still, both markets are shrinking. The photo shows a larger swimming pool installation with collectors by Japanese manufacturer Chiryu. Photo: Chiryu

“Solar thermal in Japan has a rather negative outlook, because the government still wants to promote nuclear power,” says Yasuo Okamoto, President of Chiryu. Additionally, the Japanese economy is weak on growth and the price of oil is low. Hence, the flat plate collector manufacturer with over 50 years of history saw annual production volume drop to only 1,200 m2 last year. In better years, such as back in 2010, Chiryu manufactured 5,500 m2. The overall market figures from the around 10 members of the Japanese Solar System Development Association (SSDA) have shown a constant decline since 2011 – the year when Fukushima turned March into a news source on nuclear disaster (see the chart below). After the incident, the industry expected higher demand for solar thermal technology, but Fukushima turned out to be an impetus for solar power generation only. The solar thermal market dropped in 2014 by 14 %, down to 107,654 m2.

The share of each system type has remained fairly constant over the years. Thermosiphon solar water heaters are in the majority, covering between 67 and 76 % of the market. The second-largest group is composed of small pumped systems, which have a market share of between 21 and 29 %. The association only registers vacuum tube collectors in the segment of smaller pumped systems – the share is negligible.

Taiwan: Incentive scheme loses momentum
In contrast to Japan, solar water installations in Taiwan have profited from a national investment grant since 1986. In 2009, the subsidy amount was even doubled to 2,250 Taiwan Dollar (TWD) per m2 for glazed collectors, in order to increase deployment (see table below). It resulted in a peak market volume of 127,751 m2 in 2010. The subsidy covers around 21 % of the investment costs of a residential solar water heater, for which costs have remained fairly stable at around 10,500 NTD /m2. But the 2010 market volume was never to be reached again. “The long-term subsidy scheme has lost its momentum in expanding the market,” researcher Kung-Ming Chung from the Energy Research Center of the National Cheng Kung University (NCKU) concludes in the 2015 paper Incentives to using solar thermal energy in Taiwan (see the attached PDF). “In 2014, end users could submit applications only until the end of November. Many systems received grants only in 2015.”

Figures of newly installed collector area per year, published by the Energy Research Center of the National Cheng Kung University.

The above-mentioned paper describes some particularities of the Taiwanese solar thermal market:

The national subsidy scheme in Taiwan was in place between 2009 and December 2017, however the level of subsidise changed regularly and depended now on the type of solar collector and the location where the collector is installed.