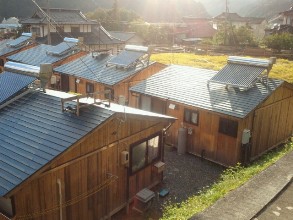 Japanese solar water heater manufacturer Chiryu Heater has equipped 110 new houses for the victims of the tsunami in the small town of Sumita. The beneficiary survived the Tsunami in the costal town of Rikuzentakata, 18 km south of Sumita. Rikuzentakata was one of the towns at Japan’s north-east coast that was almost completely destroyed in March this year.
Photo: Chiryu

“There are thousands of government-supplied temporary houses all over the Tsunami area,” explains Yasuo Okamoto, owner of Chiryu Heater. “But the temporary houses of the government are not well insulated”. In Sumita, the situation was different: The town itself has administered the housing programme, without financial support from the central government. The municipality accepted the offer of a non-governmental organisation, which donated the solar water heaters for the temporary houses, explained Okamoto. “We had a customer in Rikuzentakata, a home builder, but the company’s general manager is still missing,” says Okamoto. “We offered the employees of this company the installation jobs for the 110 systems.”

The wave of the Tsunami was as high as the city hall building of Rikuzentakata and washed people away even from its rooftop.
Photo: Chiryu

The solar water heater industry in Japan has suffered from a constant decline in recent years. According to the solar thermal industry association SSDA, the 129,839 m2 of newly installed collector area in 2010 (91 MWth) was again 2 % lower than the year before (132,693 m2). All in all, the association counted 84,145 m2 by the end of July this year. Calculated for the entire year, this could result in a slight increase in 2011. Still, Okomoto finds clear words to describe the situation: “We cannot believe that the government is still protecting Tokyo Electric Power Company (TEPCO) from the bankruptcy and is eager to push nuclear forward again”.