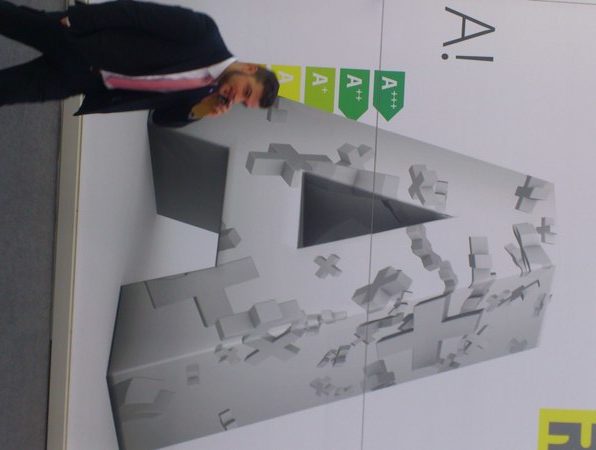 From 10 to 14 March, energy labels dominated Hall 8 at the ISH 2015 in Frankfurt. “Obviously, we have a competitive advantage with the label,” Uwe Glock, Head of the Management Board of Bosch Thermotechnik, pointed out during the fair’s press conference. Product and package labels could be found at the booths of all boiler manufacturers, which dominated Hall 8 during the international trade fair for The Bathroom Experience, Building, Energy, Air Conditioning Technology and Renewable Energies. The A with or without plus signs was the star of the show, heavily discussed in many B-to-B meetings. The 26th of September 2015, the date when the regulation will come into effect, is keeping the entire heating provider industry busy, regardless of whether a company may be specialised in boilers, heat pumps or renewable heating equipment.
Photo: Bärbel Epp

Ahead of the ISH, one of the world´s largest heating technology fairs, the German heating manufacturers association, BDH, and the European Commission had agreed on allowing product and package labels to be showcased at the ISH, because it was purely a B-to-B fair. Normally, the industry would not be permitted to use the label in marketing until 26 September 2015. “We will start after the ISH to label the first products with a long delivery chain and stocking times so called slow mover products because otherwise, we cannot guarantee that all our partner stock in 28 countries will be sold out by the key deadline,” Ralf Köbbemann-Rengers, Vice President Engineering Solar Thermal Systems and Storage Tanks at Bosch Thermotechnik, explained. He set up a 20-staff task force, which has been facilitating internal restructuring in preparation of the rating for more than a year now and has monitored the labelling of around 10,000 products offered by Bosch Thermotechnik.

Suing competitors for offering and supplying unlabelled products
The commission has granted the industry a transition period of two years since the official journal, including the regulations for the eco-design and energy labelling of water, space and combi heaters under the Ecodesign Directive (2005/32/EC), was launched on 6 September 2013. But now, 26 September 2015 is a fixed date which will not allow for any further transition periods. After this date, competitors can sue each other for presenting, offering or supplying unlabelled products in any corner of the 28 European member states, and this option was discussed as a normal procedure at the different Hall 8 booths.

One exception: thermosiphon systems. “According to the EU Comission Guidelines Accompanying the labeling regulation, our thermosiphon systems will not have to be labelled at water heaters, even if they are equipped with an electric element which only functions as a security backup,” Matteo Reymond, Group Product Manager Renewables & Air Conditioning at Italian group Ariston Thermo, said. “We only need to provide the product fiche of the thermosiphon system when delivering the system to the customer.”

The clear winner of the label is the heat pump

“The clear winner of the label is the heat pump,” Henning Schulz, Spokesperson at German company Stiebel Eltron, emphasised. “Almost all our products immediately achieve the best possible rating, A++, and several devices are already fulfilling the requirements for the highest rating, A+++, available in 2019.” But there were also A+++ labels at the fair for monovalent heat pumps, namely when the appliance had an integrated controller as shown in the photo above. “There is an inflationary use of the triple plus label for heat pumps at the fair,” Stephan Vötsch, Project Leader for Energy Labelling at Bosch Thermotechnik, said. “It needs to be clarified if the package labels could be done always with the 35°C figures for heat pumps."

Other than with heat pumps, tanks achieving a B or even an A rating present a real challenge to manufacturers because the commission issued stricter requirements for the heat losses of larger tanks than for losses at smaller volumes. “We additionally offer an A version of our tanks of between 120 and 300 litres, equipped with a vacuum panel which is fixed to the tank wall and surrounded by PU foam,” Michael Beckmann, Product Manager Solar at Viessmann, explained. “We offer them first in Germany at a 15 % higher price in order to test how customer will react.”