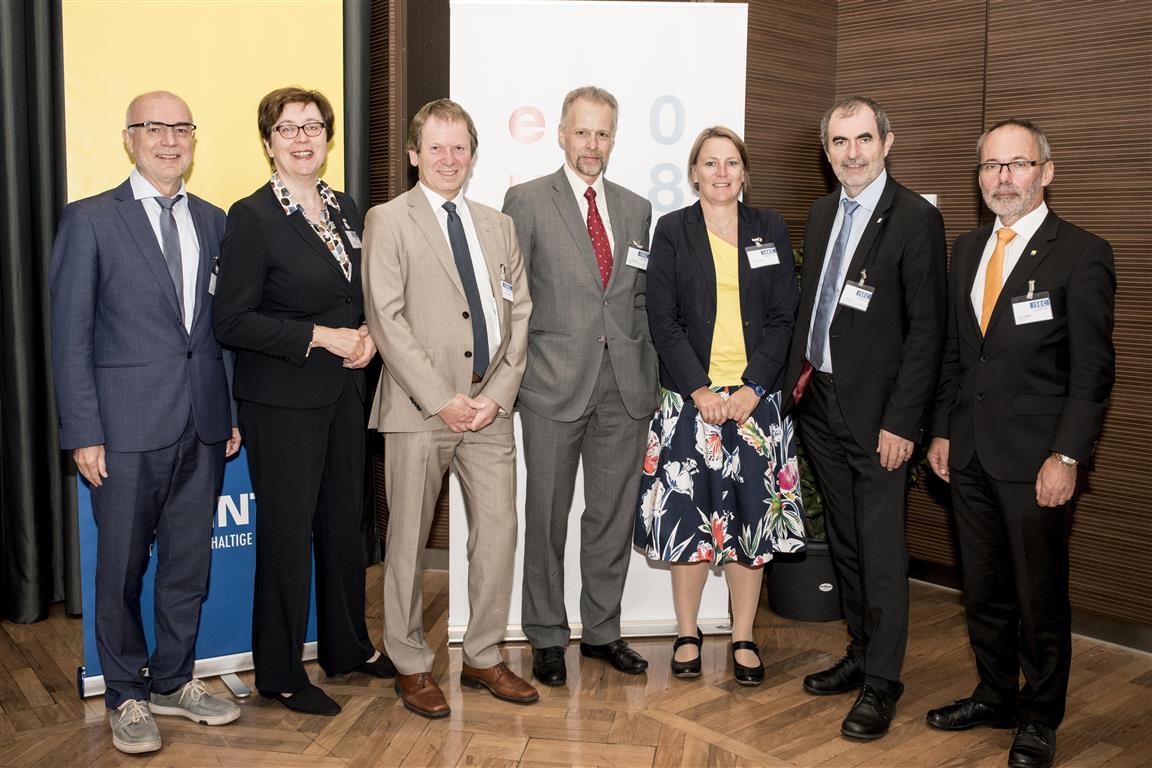 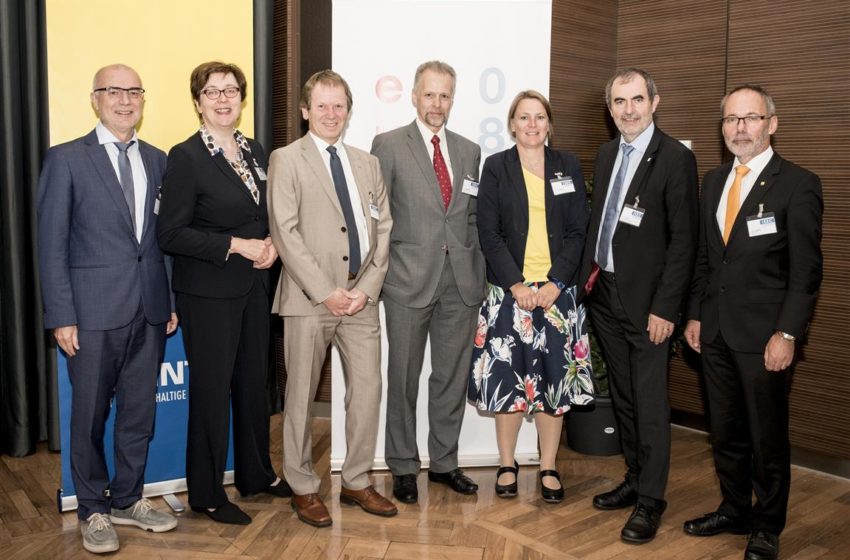 The first International Sustainable Energy Conference, or ISEC for short, was held in October, and it was a roaring success. The three-day gathering of renewable experts in Graz, Austria, was attended by 370 people from 51 countries. Organiser AEE INTEC had put together a programme consisting of technical tours on the first day and a wide variety of sessions on the second and third. The sessions provided opportunities to discuss topics ranging from urban planning and solar district heating and cooling to nearly zero energy buildings and ideas for decarbonising the industrial sector. The photo shows the speakers from policy and research of the opening ceremony.
Photo: Miriam Raneburger/AEE INTEC
At the welcome session, public officials and representatives for policy groups underlined the importance of focusing on Renewable Heating and Cooling in Integrated Urban and Industrial Energy Systems. “This conference is key to bringing sectors closer together and will help foster new ideas,” said Josef Plank, Secretary of State for Sustainability and Tourism in Austria (second from right in the photo). Theresia Vogel, Managing Director of the Austrian Climate and Energy Fund (second from left), first pointed to a lack of fast progress and private-sector money in the renewable heating and cooling (RHC) industry. Still, she said that she had noticed one positive trend: “After three years of discussing electricity only, heat has been put onto the political agenda. The years of low fossil fuel prices are gone.”
Official event of Austrian EU presidency
Until 2016, AEE INTEC had organised a biennial conference named Gleisdorf Solar, which had focused on solar applications and attracted about 230 attendees the last time round. This year, the organisers put the spotlight on the role of heat and resource efficiency across an interlinked energy system. The event also featured speakers from outside Europe.
“We are delighted that ISEC 2018 marks an official event of the Austrian European Union presidency. It shows how important the topics of the conference have become,” Werner Weiss, Conference Chair and Managing Director of AEE INTEC, said in his keynote address (first from right in the photo above). European Commission representative Haitze Siemers (fourth from right) lauded ISEC 2018 as being a perfect fit for the strategic objectives of the Union. “Under Austria’s EU leadership, we will be able to complete the last part of the Clean Energy Package,” said Siemers, who heads the Unit for New Energy Technologies, Innovation and Clean Coal at the EU’s Directorate General of Energy.
The next milestone will be the SET Plan Conference, which will take place between 19 and 21 November in Vienna. Based on the Energy Union strategy unveiled in September 2015, the plan highlights areas in which the EU needs to strengthen cooperation and accelerates the development of efficient but cost-competitive low-carbon technology. The annual conference gives decision-makers, stakeholders and researchers a chance to evaluate the SET Plan`s progress.
Initiatives to transform the energy market

Covestro achievements in increasing energy efficiency since 2005: In 12 years, production capacity grew without a rise in energy consumption or greenhouse gas emissions.
Source: Covestro
Matthias Böhm, Head of Energy Policy at plastics manufacturer Covestro, introduced participants to a Sustainable Process Industry through Resource and Energy Efficiency, or SPIRE for short. This network of industrial companies consists of 450,000 members. They participate via their membership in other associations in the chemical, mineral, steel and cement industries in Europe. The businesses that are part of SPIRE have created 6.3 million jobs and generate a combined turnover of EUR 1.8 trillion each year. SPIRE’s aim is to ensure that technologies and best practices created along the value chain help build a resource-efficient process industry. Covestro is part of the network and has managed to lower its primary energy consumption by 36.4 % since 2005 thanks to state-of-the-art manufacturing, thorough online monitoring of energy output and a steady flow of reports on key energy indicators to measure progress against targets.
AEE INTEC announced the next ISEC conference to be held on 14 to 16 October 2020 in Graz, Austria.
Organisations, events and initiatives mentioned in this article:
ISEC 2018: http://www.aee-intec-events.org/isec2018/index.php?lang=en
AEE INTEC: http://www.aee-intec.at
Sustainable Process Industry through Resource and Energy Efficiency (SPIRE): https://www.spire2030.eu
SET Plan: https://ec.europa.eu/energy/en/topics/technology-and-innovation/strategic-energy-technology-plan
SET Plan Conference 2018: http://www.setplan2018.at
Fraunhofer ISE: https://www.ise.fraunhofer.de/en.html
Austrian Climate and Energy Fund: https://www.bmnt.gv.at/english/environment/Climateprotect/Meet-the-Climate-and-Energy-Fund-.html