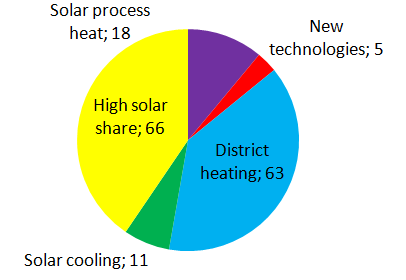 The sixth invitation to tender for large-scale solar thermal systems in Austria is still accepting applications until 24 September. The Austrian Climate and Energy Fund has again allocated a budget of EUR 5.9 million for installing collector fields of between 100 and 2,000 m2 for process heat, district heating, solar cooling, systems with high solar coverage above 20 % in trade and business and innovative technologies. The subsidy covers 40 % of the additional, environmentally relevant costs of the installation and grants a 5 % bonus for small and medium enterprises. As in the past, applicants must consult with experts from one of the three selected Austrian research institutes before submitting their proposal. Over the first five years, the Austrian Climate and Energy Fund spent EUR 17,258,324 on 163 projects. The pie chart shows the distribution of the 163 approved projects broken down by application.

Over five years, the three research institutes AEE INTEC, AIT und ASIC had 236 consultations with applicants to the programme. “Obviously, the trend in 2013 and 2014 was towards larger systems dominated by feed-in technology,” Christian Fink, Head of the Solar Thermal Energy Technology and Hybrid Systems division at AEE INTEC, summarised the results during a one-day conference in June entitled Results of 40 projects accompanied by scientific research. “Our consulting and monitoring activities were appreciated by the sector’s experts and have led to better performing systems, as well as to technology improvements regarding components and systems,” Fink said.

Majority of problems detected in non-solar heating and hot water supply system
The one-year monitoring of 29 installations is now complete, albeit eight projects are still under supervision. The performance of the monitored systems was high in general, with an average annual solar yield of 377 kWh per m2 apertur area, which could be a benchmark for future reference. All monitoring results refer to the solar energy yield of the collector field excluding losses of the storage and the district heating network. But there is still room for improvement: “We detected 115 noticeable smaller or larger problems during monitoring and implemented 55 optimisation measures,” Fink explained in his presentation. Only 43 % of the 115 problems are linked to the solar circuit; most problems were detected in the conventional part of the heating and hot water supply system (see the pie chart below).

An example of the overall improvement of collector power over the last 20 years has been the district heating plant Eibiswald. The researchers from AEE INTEC compared the solar yield of the 1,250 m2 of flat plate collectors installed in 1997 with the 1,200 m2 of collectors from 2012, with the latter being partly double-glazed. The older field achieved 356 kWh/m2 of aperture area, whereas the new field got to 507 kWh/m2. The district heating network of Eibiswald operates at 80/45 °C in winter and 70/50 °C in summer.