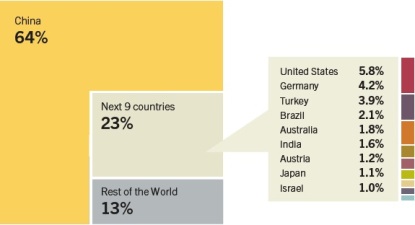 According to REN21’s Renewables 2014 Global Status Report, which was published at the UN-hosted Sustainable Energy for All Forum in New York at the beginning of June, solar thermal technologies contribute significantly to hot water production in many countries and increasingly to space heating and cooling, as well as industrial processes. REN21 is a global multi-stakeholder network for renewable energy policy, connecting key actors from governments, international organisations, industry associations, science and academia, as well as civil society. First released in 2005, the report provides a comprehensive and timely overview of renewable energy markets, industries, investments and policy developments worldwide. The renewable energy data is provided by an international network of more than 500 contributors, researchers and authors. According to report data, the world added 55.4 GWth (more than 79 million m2) of solar heat capacity in 2012, increasing the cumulative installed capacity of all collector types in operation by over 14 % for a year-end total of 283.4 GWth. The chart above shows the shares in global capacity in operation across 2012’s top ten countries.
Source: Renewables 2014 Global Status Report
REN 21’s report shows that an estimated 53.7 GWth (almost 97 %) of the market was glazed water-based systems, and the remaining systems consisted of unglazed water-based installations, mainly for swimming pool heating (3 %), as well as unglazed and glazed air collector systems (<1 %). Glazed and unglazed water systems provided an estimated 239.7 TWh (863 PJ) of heat annually. These global figures were provided by the Austrian Institute for Sustainable Technologies and will be elaborated on in the annual study Global Heat Worldwide, which is planned for July 2014.
China’s vast share in solar heat capacity
According to the report, the overwhelming majority of solar heat capacity could be found in China, which accounted for 86 % of the world market and 64 % of total capacity in 2012. The top countries for capacity added in 2012, including both glazed and unglazed systems, comprised China, Turkey, India, Brazil and Germany, and the top five for total capacity in operation were still China, the United States, Germany, Turkey and Brazil (see the chart above).
In 2013, an estimated 57.1 GWth (81.6 million m²) of gross capacity was added worldwide, bringing operating global solar thermal capacity to about 330 GWth (including 325.9 GWth of water-based collectors and an estimated 3.6 GWth of air collectors). There was enough capacity by year’s end to provide approximately 276.6 TWh (996 PJ) of solar heat annually.
Solar thermal heating and cooling markets in brief:
More solar thermal for industrial applications
The authors of the Renewable 2014 Global Status Report point out that there is a trend towards bigger domestic water heating systems for hotels, schools, multi-family homes and other large complexes. Solar thermal technologies are being used increasingly for industrial applications, providing heat and steam, refrigeration and air conditioning. Major industrial uses include food processing, cooking and textile manufacturing. A growing number of district heating systems rely on solar thermal technology, often in combination with other heat sources, such as biomass. The still modest global solar cooling market grew at an average annual rate exceeding 40 % between 2004 and 2012, and approximately 1,050 systems of all technology types and sizes were installed by 2013.
“Global perceptions of renewable energy have shifted considerably,” Arthouros Zervos, Chair of REN21, says. “Over the last 10 years, the continuing technological advances and rapid deployment of many renewable energy technologies have demonstrated that the question is no longer whether renewables have a role to play in the provision of energy services, but rather how we can best increase the current pace to achieve a 100 %-renewables future with full energy access for all. For this to be become reality, current thinking needs to change: continuing the status quo of a patchwork of policies and actions will no longer be sufficient. Instead, technological developments, financing models, as well as stable and predictable renewable energy policies need to be systematically linked across the public and private sectors in order to support and drive the transition process.”
More information:
Report for download: http://www.ren21.net/gsr
Sustainable Energy for All: http://www.se4all.org
REN 21: http://www.ren21.net