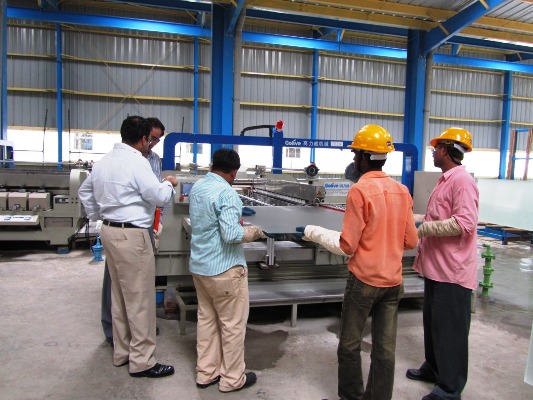 In India, there are multiple indirect taxes levied on most transactions. These taxes are divided into those collected by the federal government and the ones collected by state authorities. At the beginning of August, the Indian parliament passed the Goods and Services Tax (GST) Bill, which aims for a radical overhaul of the country’s tax system by merging federal, state and local taxes and turn India into a “single-tax” country. The GST is expected to improve the way business is conducted, make foreign investment more attractive and increase the gross domestic product by between 1.5 and 2 %. But the renewable energy industry may take a hit, according to statements from members of the Solar Thermal Federation of India (STFI). All tax incentives will end under the new GST regime, which is to be implemented by 1 April 2017.
Photo: Gujarat Borosil Glass Works
The thriving renewable energy industry has enjoyed various fiscal incentives, such as a 100 % tax holiday on earnings for 10 years, concessional or no excises and custom duties and so on. Similarly, solar thermal systems have been exempt from most forms of taxes, except from a VAT ranging between 0 and 5.5 %, depending on the state where a system was sold. All these tax incentives will come to an end under the new GST regime, since it combines all taxes, such as VAT, excise taxes, services, etc. into one. If this default percentage is above the previously set VAT, it will result in system price increases.
“If the increase in GST on a solar energy system is above the previous VAT rate, we may not be able to absorb that increase, since our raw material could also cost more and will not help raise our net revenue,” R S Sethurraman, CEO of Solar Hitech Geysers, described the dilemma faced by the industry.
Uniform policy should not put domestic manufacturing at disadvantage
Devendra Surana, Managing Director of Bhagyanagar, India’s s largest absorber-fin coating manufacturer, claimed that the new uniform policy should not put domestic manufacturing at a disadvantage: “E.g., whereas imported systems are currently exempt from all taxes, domestic manufacturers have to pay taxes on components as well as sales taxes in some places. This type of duty structure should be avoided.”
The Ministry of New and Renewable Energy (MNRE) is aware of the issue. According to a recently published MNRE study, the implementation of the GST will increase the cost of setting up all kinds of renewable energy systems. The MNRE is believed to be pushing for an exception to the GST, arguing that a sudden increase in cost would lead to disruptions in the sector and delay the implementation of solar policy targets. The MNRE has requested that the government work on a mechanism or a formula which would ensure that costs of renewable energy system stay level post-GST. “Ideally, we should put a GST on imports so that it becomes a level playing field and domestic manufacturing is not at a disadvantage,” Piyush Goyal, India’s Minister of State of Power, Coal, New and Renewable Energy, had already stated back in July 2016.
STFI is of the opinion that there is a strong case for solar thermal sector to be exempt from GST. Moreover, the solar thermal sector is still relatively small; an exemption would not lead to a significant loss of earnings in the short-term.
More information:
http://finmin.nic.in/gst/index.asp
http://www.gstindia.com/
http://energy.economictimes.indiatimes.com/news/renewable/high-gst-may-hurt-solar-heater-makers/53820162