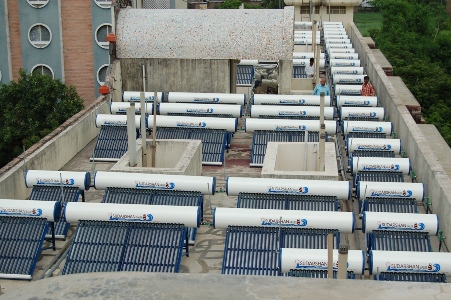 India is one of the largest global importers of vacuum tubes used in solar thermal collectors – also because there has not yet been a business manufacturing them locally. Market volume amounted to an estimated 4 million vacuum tubes in 2014, which are currently imported under four different Harmonized System (HS) codes, with each of them referring to another type of application. Because of a lack of certified standards for vacuum tube collectors, some dealers are taking undue advantage of the situation and fall prey to sub-standard quality at cheaper prices. As a result, India has virtually become a “dumping ground” while the number of complaints has been on the rise.
Photo: Jaideep N. Malaviya
The new Financial Law has exempted vacuum tube imports from basic customs duty since 1 March. This move was viewed as a measure to curb cheaper imports, as resellers were required to pay VAT, whereas assemblers of solar water heaters were able to claim VAT exemption. Since vacuum tubes are described in four different HS codes, it often was difficult to separate the exempted vacuum tubes from other parts for solar water heater manufacture. As a result, dealers have not only been importing vacuum tubes under this act, but also other sub-components – mostly, storage tanks. This is hurting domestic production and if it continues unabated, it will make imported solar collector systems cheaper than locally manufactured ones.
One single HS code for vacuum tubes
The national industry body, the Solar Thermal Federation of India, STFI, has called for the creation of one single HS code for vacuum tubes and an additional, separate HS code for the entire solar collector system and its components imported in partly or completely knocked-down condition. The association has also called for an immediate implementation of standards for vacuum tube collectors to avoid low-quality imports.
“The customs duty exemption for imports under the second HS for entire solar collector systems can be removed entirely in the case of imports,” explains R S Sethurraman, CEO of Solar Hitech Geysers, a Bangalore company manufacturing solar water heaters based on vacuum tube technology. “This would encourage dealers and manufacturers who have been importing, for example, tanks to turn to local manufacture, which matches the slogan ‘Make in India’.”
In August 2015, members of STFI had a meeting with senior officials from the Ministry of New and Renewable Energy (MNRE) to assess the situation. The MNRE officials reacted, stating that they would give priority to the matter and work with the Ministry of Commerce and Industry to devise dedicated HS codes as suggested. According to MNRE information from September, the process has already been initiated and it is likely to take about 3 to 4 months to finalise the guidelines.
More information:
http://www.stfi.org.in