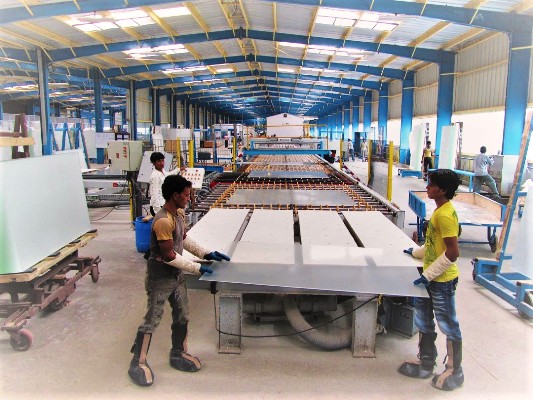 The new Union Budget that Finance Minister Arun Jaitley presented on 1 February 2017 proved the country’s commitment to renewable energy deployment. The funds available to the Ministry of New & Renewable Energy (MNRE) will increase by 9 % from INR 50.36 billion (around EUR 720 million) in 2016-2017 to INR 54.73 billion (about EUR 782 million). There have also been new tax regulations on solar-tempered glass, and the minister announced the creation of a development fund for the dairy processing industry and infrastructure development. The photo shows the inside of the solar-tempered glass factory of Gujarat Borosil Glass Works.
Photo: Jaideep Malaviya
The countervailing duty (CVD) on parts or raw material needed to manufacture solar-tempered glass for solar thermal collectors and PV modules has been lowered from 12.5 to 6 %. CVDs – also known as anti-subsidy duties – are trade import duties imposed under World Trade Organisation rules to neutralise the negative impact of subsidies.
Similarly, the 5 % basic customs duty on imported solar-tempered glass has been removed altogether. This might make solar collectors cheaper, but prove counterproductive to domestic manufacturing. Rajat Verma, Managing Director of ARS Glasstech, said about the unhealthy competition from cheap imports: “Import duties should be structured properly for domestic manufacturing to survive.” Multinational manufacturing businesses may find it more feasible to open a warehouse in India and stock up on imported glass rather than produce it domestically.
However, Shreevar Kheruka, CEO of Borosil Glass Works, India’s largest solar glass manufacturer, said that the announcement would have no effect on the market. “The import tax exemption for tempered glass won’t have any impact. Back in 1999, there had already been a circular showing tempered glass being exempt from import duty. But then a few years ago, the duty was raised to 5 %. On the other side, you have the lower 6 % CVD for manufacturers, which means overall costs for producers and importers will stay the same.”
Additionally, the finance minister announced the establishment of a dairy processing and infrastructure development fund with a three-year budget of INR 80 billion (EUR 1.14 billion), starting with INR 20 billion (EUR 286 million) between 2017 and 2018.
Temperatures in dairy processing range from 50 to 200 °C, which solar thermal technologies can supply with ease. It is hoped that companies in the field will want to avoid fossil fuel use and focus on renewable energy technologies, particularly solar thermal. Madhusudhan Rao Rapole from Oorja Energy, a first-generation entrepreneur whose company is manufacturing parabolic dishes, sees huge opportunities for solar thermal. In his opinion, a mandatory clause stipulating that at least 10 % of the heat demand be met by solar thermal should be imposed on all dairy producers. With 140 million tonnes per year, India is the world’s largest producer of milk.

Eleven solar equipment manufacturers were asked how many square metres of solar process heat collector area they could realise in particular industry segments.
Source: STFI
The country has already been at the forefront of solar process heat developments in the industries, and a study by the Solar Thermal Federation of India (STFI) shows dairy processing as the most apt way to maximise the use of medium- to high-temperature solar thermal concentrating collectors. STFI contacted 11 solar equipment manufacturers and ask them in which industry segments 10,000 m² of solar process heat collector area could be achieved in the coming 12 months. The solar manufacturers assumed the highest collector area to be realised in dairy processing, followed by the automotive industry (see the chart above).
Union Budget 2017-2018: http://indiabudget.nic.in/budget.asp