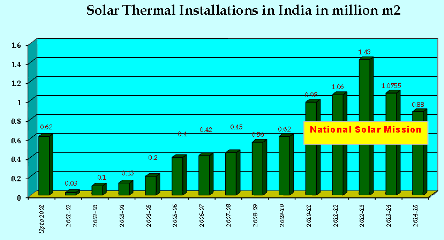 The Indian solar water heater market is undergoing a transition, from capital subsidies to a slowly intensifying market on a self-sustaining basis. The industry had to face a severe drop in volume in financial year 2014-15, with 0.88 million m² of newly installed collector area after the national capital subsidy scheme was halted in July 2014, which was almost 40 % less than in the boom year of 2012-13 with 1.43 million m². To discuss alternative ways of fostering the deployment of solar heating technology, the Solar Thermal Federation of India (STFI) joined forces with the Ministry of New and Renewable Energy (MNRE) to organise a workshop entitled Roadmap for Solar Water Heater Business in India in New Delhi at the end of July. During the workshop, industry representatives proposed several support measure alternatives to capital subsidies – a promising one are solar obligations represented in case studies such as the successful one in Bengaluru, Karnataka state.
Source: MNRE/STFI

Effective solar by-law implementation
T Ananth, CEO of solar thermal system supplier Nuetech Solar Systems, used the success story of the solar obligation in Bengaluru, Karnataka state, to point out that such by-laws could be a promising tool for increasing solar thermal technology deployment in other cities as well (see the attached document). “The Mandatory Rule for solar water heaters in new construction was effectively implemented in cooperation with local utility Bangalore Electricity Supply Company (BESCOM), which either did not give any or in some cases temporary connection to the electricity grid if the household did not comply to the building standard.” According to BESCOM´s statistics, there have been 419,493 solar water heaters installed since 2008, a number growing by 70,000 each year. With an average 3 m² per system, this adds up to 1.26 million m² which save 629 million kWh of electricity annually (1,500 kWh per year and system). In reference to the 6 million households connected to BESCOM, solar penetration is at 21 %. Ananth also said that the reason for the success was the “high level of awareness among the public and the builders, as well as a very active marketing, sales and service network of the industry.”
Make in India to curb imports
Mangal Akole, STFI Chairman, showed in his presentation that nearly 80% of solar water heater components have been produced domestically. Hence, the presently ruling government is expected to announce attractive financing schemes for the industry through its programme Make in India in order to increase manufacturing capacities, considering that Indian loan interest rates are the highest in the world.
R S Sethurraman, CEO of Solar Hitech Geysers in Bangalore, emphasised the importance of curbing imports, which has been the most talked about subject in recent times besides the Make in India slogan (see presentation attached). The government has recently introduced VAT on imports of solar collector systems, whereas manufacturers importing components for system assembly can offset VAT against business dealings. This was seen as a measure to curb cheaper imports by traders as it made their products more costly. Sethurraman said that the traders more and more claimed the VAT exemption by importing individual component parts and assemble the components in India. He proposed that separate import codes be created for the import of tubes and the import of complete solar water heating systems, with the latter having a high import duty.
Tarun Kapoor, Joint Secretary at the MNRE, stressed the importance of quality within the industry. Kapoor appealed to STFI to propose a mechanism for stricter quality compliance, and the government intends to issue a quality seal to manufacturers meeting quality norms similar to the Solar Keymark in Europe.
The event concluded by establishing consensus on issues which could be agreed upon by all industry representatives:
STFI with headquarters in Pune, Maharashtra, engages three full-time staff in addition to a secretary general. Currently, the association’s 29 members consist of solar thermal manufacturers and system suppliers, as well as three regional administrative bodies.
More information:
http://www.stfi.org.in
This text was written in cooperation with Jaideep Malaviya, an expert in solar thermal based in India (malaviya@solrico.com)
https://solarthermalworld.org/wp-content/uploads/2015/08/india_ananth_roadmap_workshop.pdf
https://solarthermalworld.org/wp-content/uploads/2015/08/india_sethrurraman_stfi.pdf