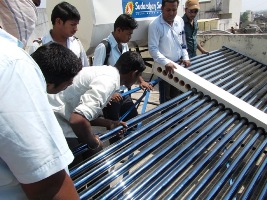 It turned out that the fast-growing market for solar water heating systems in India required more installers who could fulfil its particular requirements than had been available. Bearing this in mind, the International Copper Promotion Council of India (ICPCI) organised its first training programme for installers in Pune in the last week of March 2011. The 24 trainees expressed their satisfaction with the 6-day course and offered manufacturers their first installations just a few weeks later.
Photo: Jaideep Malaviya

Training took place at the Industrial Training Institute (ITI) in Pune in Maharashtra State, Western India. Because more than 90 % of India’s residential solar water heaters are installed in urban areas (source: UNDP GSWH study), the principal city of Pune is a key market of the solar thermal sector in India. Using an entrance test, 24 out of 49 plumbers qualified for the training course.

The aim was to provide practical knowledge to the trainees on how to install solar water heating systems if being self-employed. After training, these plumbers were though to offer their services to manufacturers in a new fashion: traditionally, producers have had their own installers or sub-contractors.

A total of 18 manufacturers make Maharashtra state an important centre of the national solar thermal industry. All major producers welcomed the idea of these trainings, and contributed to them by delivering lectures and offering participants hands-on-training at their installation sites – which has become an added advantage. The unique course mix consisted of 20% time for theoretical sessions and 80% field training. The 3 sites made available included a commercial installation on the roof of a hostel, a residential close-loop thermosiphon system, and a large-scale forced-circulation system on top of a multi-storey flat block. The field training covered both flat plate, as well as vacuum tube systems. One of the major highlights of these visits was the possibility to study correct piping layouts, as they are crucial to ensure smooth hot water flow. Other important points concerned the selection of suitable sites on rooftops in heavy populated areas to avoid shading.

A written examination completed the course, which enabled ICPCI to evaluate the effectiveness of the programme. All of the 24 trainees fared very well in the exam. In addition, their feedback was overwhelming. They came to the conclusion that self-employment would actually give them enough opportunities in exploring business ties with various manufacturers rather than being confined to only one of them. They also expressed their satisfaction with the elaborations on installation complexity on high-rise buildings given as part of the course.

Several weeks after the training, the plumbers were already setting up their first installations. To gauge the programme’s success, ICPCI will extend the training to the large cities of Bengaluru and New Delhi, the other major solar thermal markets. All in all, ICPCI aims at training 500 plumbers during the current year.