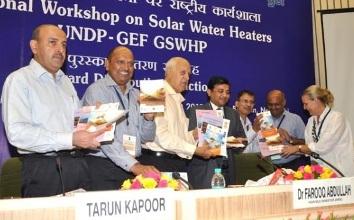 India has been one of the great beneficiaries of the Global Solar Water Heating Market Transformation and Strengthening Initiative (GSWH Project). The initiative, which was financed and implemented by the UN organisations UNDP/UNEP and GEF, has sought to speed up the growth of the solar water heater market around the globe. To reach its aim, the GSWH project has chosen a variety of options: generate demand, strengthen the supply chain, adopt quality measures and establish a supportive regulatory environment. The UNDP team has already pointed to India as the most successful example among the benefitting countries. To honour valuable contributions, the Ministry of New and Renewable Energy (MNRE) organised a National Workshop on 23 August 2012 in New Delhi. At the workshop, the Energy Minister, Dr Farooq Abdullah, presented a total of thirteen awards to State Nodal Agencies, municipal corporations and Channel Partners. The GSWH project started in September 2008 and will end by December 2012.
Photo: Jaideep Malaviya

The energy minister also released a software programme called Solarwhin. The programme will monitor the Channel Partners’ progress and the status of the subsidies. The database will store photographs of persons who received a subsidy and make sure they will not receive it a second time.