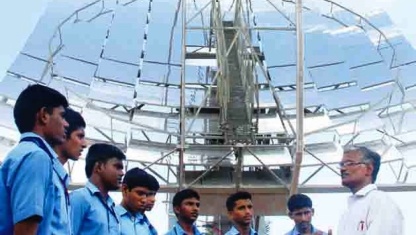 The Ramakrishna Mission Student’s Home in the city of Chennai, the capital of Tamil Nadu state on India’s southeast coast, is a combined residential high school and polytechnic college. It caters for around 700 orphan and poor students by providing free education, food and accommodation each year. The kitchen, which is supplied by Liquefied Petroleum Gas (LPG), has witnessed a sudden increase in costs because reductions in subsidies have led to rising energy prices. Hence, the mission’s management decided on a solar concentrating system in order to reduce LPG demand for cooking. The dish concentrator was installed three months ago.
Photo: Clique Solar
The residential school kitchen offers breakfast (4.30 to 6.30 am), lunch (10 to 11.30 am) and dinner (3.30 to 5.30 pm). An uninterrupted hot water supply, quick steam generation in the morning and automated operation were the main requirements with which Clique Solar was approached. The manufacturer of solar concentrating dish systems accepted the challenge and designed a storage solution that could supply energy for cooking even in the early morning and at lunch break. Until now, solar thermal storage systems in India had mainly been developed for solar thermal power plants, as storage solutions did not seem economical enough for smaller applications, such as industrial process heat or cooking for public institutions.
Solar steam storage for morning meals
The solar steam cooking system for the Ramakrishna Mission Student’s Home consists of one 34 m² Arun 100 dish installed on the roof of an existing building and a pressurised energy storage tank (steam accumulator). The installation was integrated with the existing LPG-fired steam boiler, which acts as a backup by generating 540 kg of steam/day. The desired steam temperature is about 160°C. The Department of Energy Science and Engineering of the Indian Institute of Technology Bombay has tested Arun100 at operating temperatures of 200 °C reaching an optical efficiency of 0.61 kW/m² and a heat loss coefficient of 0.60 W/m²/°C. According to Clique Solar the solar system is designed to meet the entire cooking needs for breakfast except for cloudy days resulting in LPG fuel saving of 30 to 40 kg per day.
The steam generated by the dish is either immediately directed into the kitchen whenever energy is required or to the steam accumulator, where it is stored for the next morning. The storage system is a PUF-insulated 304-grade stainless steel tank, in which pressurised hot water and steam accumulates while the system is running. The 2.5 m3 storage capacity of the tank meets the steam requirements for all of the morning meals put together. The steam accumulator works based on the principle of a so-called Ruths tank, which is filled with hot water and pressurised steam during operation of the system.
Solar steam increases tank pressure, hot water amount and temperature
At first, the accumulator contains cold water, which fills up to half of the tank. When the sun is shining, the generated steam enters the accumulator from the inlet at the top and is stored in pressurised form. Some of the steam condenses and heats the water. Condensed steam raises the water level in the tank to about three quarters. The remaining steam fills the space above water level. Thus, hot water temperature, pressure and water amount increase when storing steam in the accumulator. In the early morning, the required quantity of pressurised hot water is directed to the cooking vessels and, subsequently, provides the means to cook during the day.
More information:
http://www.chennaimath.org/
https://www.youtube.com/watch?v=KP4x7O-1XU8