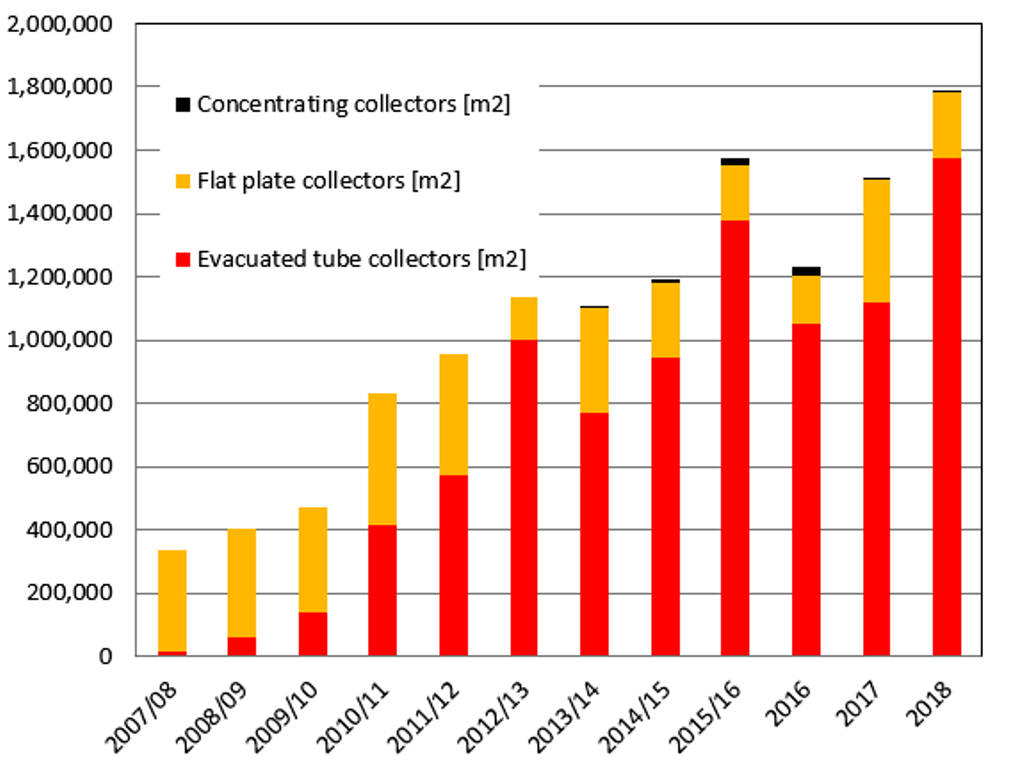 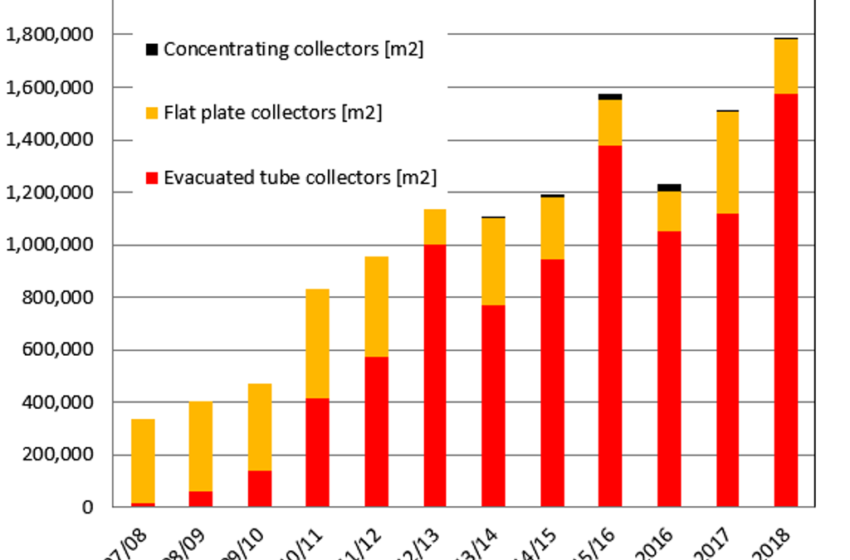 Despite a booming solar PV market, India’s solar thermal industry managed to increase sales by as much as 17 % in 2018. It sold 5.85 million vacuum tubes (2017: 4.59 million), with Chinese imports increasing by 28 %. By contrast, flat plate collector sales dropped 46 % (147 MWth) below the peak year of 2017 (278 MWth). Plus, the Ministry of New and Renewable Energy (MNRE) reported it had subsidised commercial solar heat systems with a total aperture area of 4,500 m² (2017: 5,450 m²).
Source: Jaideep Malaviya
This shift away from flat plate collectors towards vacuum tubes was the result of cost advantages of the latter, as key system materials of the former, namely copper and glass, became more expensive last year. The Solar Thermal Federation of India (STFI) expected even higher growth had it not been for the popular PV systems, which took up much of the available roof space. The flat plate collector industry consists of few manufacturers. The largest one is Emmvee Solar Systems, which has been in business since 1992, though it has changed hands several times. And Bhagyanagar Industries, India’s biggest fin manufacturer, enjoys a near-monopoly when it comes to delivering coated absorber fins to collector assemblers in the country.
Table 1: Vacuum tube imports into India in 2018
Figures provided by authorised agencies show that 5,854,000 vacuum tubes were imported for low-temperature applications under four HS codes from January to December 2018 (see table 1). Tubes measuring 58 mm by 1800 mm were used in 77 % of all systems sold on the market, while a size of 58 mm by 2100 mm could be found in 21 % of all installations. Table 2 shows the absorber area per tube, as per Bureau of Indian Standards specifications.
Table 2: Vacuum tube area in m²
However, commercial systems that include concentrating solar collectors or vacuum tube ones with CPCs (compound parabolic concentrators) saw their numbers fall in 2018, despite the government’s offer of a 30 % subsidy. The reasons for it were a number of attractive PV solutions occupying much of the roof space on industrial plants. Figures supplied by the MNRE show that close to 4,500 m² of collector area was commissioned last year, down from 5,643 m² in 2017. Solar thermal cooking was the main reason for putting up new systems, contributing almost 60 % to sales, while solar heat for industrial processes came to about 30 % and cooling to 10 %.

Installations for solar cooking have been dominating the incentive programme since its start in 2012. Their share in the total number of applications is 63 %. Process heat is second, making up 25 % of all subsidised systems. Solar cooling and air conditioning systems are rare – standing at 13 % – but are, on average, 679 m² in size, which means they are often larger than other kinds of systems.

Commercial solar thermal systems subsidised by the MNRE scheme from 2012 until January 2019.