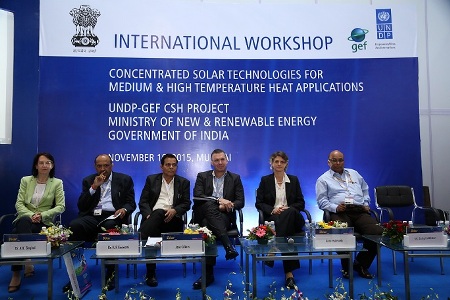 The International Workshop on Concentrating Solar Technologies set a new record in participation: Over 150 delegates attended the event in November in Mumbai organised by the Indian Ministry of New and Renewable Energy (MNRE) under the auspices of the UNDP-GEF project on Concentrated Solar Heat (CSH). Its highlight: the discussions with industry experts and programme officials, during which the industry stakeholders called for greater R&D budgets and a performance-based incentive.
Photo: Intersolar
Dr A K Singhal, National Project Manager of the UNDP-GEF project, said in his inaugural speech that the programme had so far supported 61 CSH projects with a combined installed area of 18,117 m²: “The sample monitoring of 15 already commissioned systems has revealed that the performance is shoddy and several challenges need to be addressed.” As per figures released by the MNRE, there were 177 systems totalling 44,695 m² set up successfully for cooking and process heat applications in India.
Some key questions debated during the workshop were:
Dr S N Srinivas, Programme Officer from UNDP, praised the achievements made so far, but also expressed his concerns about several underperforming systems. Srinivas called on the industry to offer suitable maintenance solutions, so as to ensure long-life operation. Dr Ajay Chandak from PRINCE, a developer of concentrator cooking systems, said it would be best to introduce a performance-based incentive in place of the current one-time area-based subsidy to eschew underperforming systems. A similar view was expressed by Abhishek Bhatewara, Director of Clique Solar, who said that all their systems were performing according to expectations because of timely upkeep and maintenance.
Additionally, people in the industry called for a greater R&D budget to be assigned by the MNRE to ensure life-long operations. Dr Ramakrishna Sonde, Executive Vice President of Thermax Industries, proposed a massive increase in R&D funding, as the technology was in a nascent stage and needed attention at sub-component level to ensure successful operation. Both the MNRE team and the UNDP-GEF officials listened closely to the proposals made and agreed to look into them.
This has been the seventh Intersolar India so far. The organiser, German company Solar Promotion, counted 200 exhibitors, which means that the event was completely booked out. Around 11,000 international participants visited the three-day fair, and 680 participated in the several conference sessions which took place during the same period.
More information:
http://www.cshindia.in
http://www.mnre.gov.in
http://www.intersolar.in
Websites of companies mentioned in the article:
http://www.cliquesolar.com
http://www.princeindia.org
http://www.thermaxindia.com