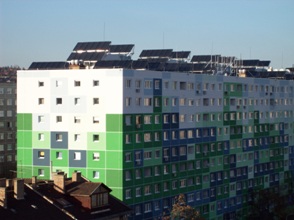 Over the last years, Hungary has turned out to be an interesting but highly fluctuating market for solar thermal technology. Through its subsidiary in the neighbouring country, Austrian manufacturer Tisun has been doing business in Hungary since 2008 and has already made its mark on the state’s solar thermal sector. In December 2009, the company supplied the collectors for the so-called „Village House“ in Budapest, with its 1,500m² the country’s largest thermal system so far. Solarthermalworld.org spoke with Michael Tschol, Tisun’s Sales Director for the Hungarian market, and Balázs Szendrö, Tisun’s Sales Manager on-site in Hungary.
Photo: Tisun

solarthermalworld.org.: According to the ESTIF report, the Hungarian market for solar thermal grew by 127% in 2009. Which factors do you think were driving this positive development?

Balázs Szendrö: After talking to local traders and installers, we can, unfortunately, not verify ESTIF’s numbers. Rather, the market boomed in 2008, when Tisun had just entered the Hungarian market. In our view, the market stagnated or even decreased in 2009. Apart from the general need to catch up in the sector of renewable energies, the crucial factors for the boom in 2008 were the commercial and residential incentive schemes between 2008 and 2009. In 2008, there was an incentive programme for the residential sector, which ran throughout the entire year and was relaunched for a short period in August 2009.

There are no such framework conditions for 2010, which means the funds for the commercial sector were already exhausted a long time ago and there have not yet been any new funds allocated after the last election in April. With regard to the residential sector, there are no incentives in 2010 at all. In light of the difficult economic and political situation in Hungary, the public and private debt, structural deficits, the weak currency, etc, the solar thermal market will, all in all, experience a dramatic decrease compared to 2009.

solarthermalworld.org.: What made you enter the Hungarian market?

Michael Tschol: It was part of our company’s growth strategy, which has us now present in 42 countries. In contrast to the strategy we follow in other export markets – selling our products through a distribution network – it made sense to directly enter the market, because, as in this case, Hungary borders the country of our headquarters.

Michael Tschol: There are a few Hungarian companies which manufacture collectors. Their role on the market, however, is decreasing steadily because of the increasing importance placed on quality. All of the big German and Austrian manufacturers are also operating in Hungary. There are at least 12 to 15 large system providers from Western Europe, plus a few Greek and Turkish companies, as well as 8 to 10 importers of Chinese systems.

solarthermalworld.org.: Who is currently the market leader in Hungary and with how much square metres?

Michael Tschol: With its 3,500 m² of installed collector area, Tisun was certainly among the best-selling manufacturers in the glazed flat plate collector market in 2009. There are no reliable numbers for the entire Hungarian market. Estimates in m² of collector area vary between 10,000 and 25,000 m² for last year.

solarthermalworld.org.: How well-known is solar thermal among Hungary’s public and politicians?

Balázs Szendrö: There has never been a campaign in Hungary for solar, which means there is no public awareness for it. This can be attributed to the fact that there is no association structure in this field of technology which would be similar to the one in other European countries. For 60 years, Hungary has promoted gas as the most important energy source. The dependence on Russia resulting from those past actions will now force decision markers to contemplate alternatives.

Of all renewable energy sources, solar thermal is not the most well-known technology. The conditions for the use of biomass and geothermal are extremely good in Hungary, which is why investments by the commercial and public sector have rather focused on those technologies. For 2011, the government has announced new framework conditions in light of the environmental and energy policy “20-20-20 goals” of the EU.

solarthermalworld.org.: How has your large-scale project in Budapest stood the test after one year in operation?

Balázs Szendrö: The system came into operation at the beginning of December 2009. Since then, it has run without difficulties and according to expectations, which means a solar share of 50% in the hot water demand.

solarthermalworld.org.: Are there any new orders of a similar kind?

Balázs Szendrö: The system is certainly a great reference project for Tisun and was also covered extensively by the media. The convincing performance of the large-scale project has notably increased demand. Many new projects have already been planned up to the last detail, but their implementation has been postponed by the investors until 2011 because of the difficult incentive situation.